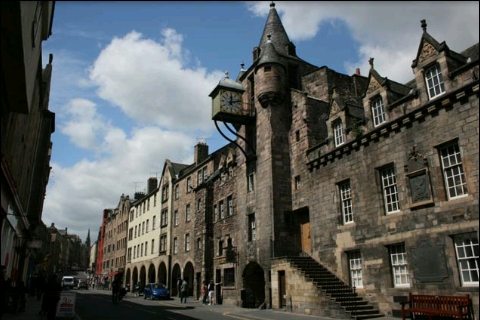 If you are a fan of mystery stories, crime drama and Edinburgh I’ve got the best Android app for you! Ian Rankin is well known for his Inspector Rebus novels in what has been called the Tartan Noir style. Well, not only can you read these books the old fashioned way but NOW, ‘There’s an app for THAT!”

Yes, you can get all involved with what inspires Rankin and walk around Edinburgh. I’ve been using the SAMSUNG-SPH-M930 and the Samsung Galaxy S ll and have installed this app on both.

The App has a series of tabs starting with “Intro”. From here you get a audio/video explanation from the author on what the app is for and how to use it. Plus, you get to read some of his latest book by taping “Read Part One”. Tap “Out Now” to read a synopsis and view a You Tube video where Rankin talks about his new book. There’s also a link to where you can get this novel.

Next we have the “Tours” tab which lists the three main sections of the city that Rankin has his characters occupying within his mystery stories. Just before Christmas the Special Winter Edition automatically uploaded to the App so that’s an additional bit of fun.

The “Map” tab is next. Here you can pick a particular area or landmark to check out who has been there. Tap one of the “pins” and this opens to a specific tour of that landmark with all the multimedia available.

The “Books” tab lists all of Rankin’s novels. Tap each book to get a summary and a link to buy from Amazon.

The last tab – “More” – provides links to various Castles, churches, museums found in Edinburgh as well as Rankin’s own website

Included in several of the tour points are You Tube videos where you get an explanation from Rankin of what inspired him about an area. Here’s one which you should find enlightening:
“Fleshmarket Close”

The app does work fine in both phones I have tested so far and should work on any Android device. However, I did notice certain restrictions. The screen does not Auto rotate (horizontal/vertical) at all and there’s no way to change it. It’s always on vertical. I’m not suggesting this is a major problem, it’s just a fact. As I look through a series of still images I Have to Return to the thumbnail page to look at the other images. This requirement to Return rather than move forward is common with in this App. It’s not a huge problem, but some find it irritating. Aside from these technical issues, the app is stable, fascinating and just plain wonderful. I’ve never had the opportunity to visit Scotland and this is one fabulous method in a way that is not typical. The mystery (from the books) adds to the mystic.

I have asked Tom Doran – who has been to Scotland and Edinburgh – to weigh in on this from his point of view:

I’ve visited Edinburgh several times, and while I don’t know it the way a tour guide or any local would know it, I can still get around a wee bit without too much help. And even if I do get lost – that isn’t necessarily a bad thing. One can stumble on wonderful things, big and small, that commonly don’t make into a tour book. Stumbling into unknown worlds and dark corners can often be revelatory – however in the dark world of Ian Rankin’s detective Rebus, the same wrong turn can very easily get you killed.

Ian Rankin has created an app for you phone that allows one to find those shadowy places in a relatively safe way.

I’m used to wandering when I travel as I feel it is the only way to really discover the real city I am visiting – when last I was in the so-called “Athens of the North”, I came across a hidden, narrow little tea shop, run by a woman with two different colored eyes and dressed like a Dickens character – nearby was a 15th century church converted into the Brass Rubbing Centre; I found secluded poetry book stores, and a shop devoted almost exclusively to playing cards. Wander and wonders may reveal themselves – or even a corpse or two if you inhabit Rankin’s fictional world (and perhaps even if you don’t).

There are also unpleasant places to be found: The “schemes” – where crowded Council Housing has the same effect that the “projects” in America had on it’s poor residents. Locals in distressed circumstances were crowded together in dubiously designed blocks of towers. Though planned and built with apparent good intentions, I doubt that any of those city planners would have spent a month living there, – let alone years, decades – a lifetime. Crime and decay are bringing these 1950’s and 60’s concepts to an end thankfully – and while many who grew up in such places and have happy memories, that seems to be a happy symptoms of all childhood innocence.

Rebus would know this kind of environment very well indeed. His app explores the favorite city of Rankin, and for fans of his novels, this is a treasure trove of fun facts and pictures. It is essentially a guided tour to places in the city that his fictional hero traverses – where terrible things happen – where wonder sites can be seen.

Ian provides both audio and written descriptions for his tour – along with a couple of select photos for each location. The audio however duplicates the text, and while I understand the reasons for this, it is a lost opportunity to have some extras. I can’t fault him for not devoting his life to this – he has terrific books to write after all.

This should not be considered something to use as a convenient tour itinerary however – and is not meant to be – merely pointing out the points of interest that he himself (and Rebus of course) want you to envision. Fans of the novels will love this, and those novices, to both the city and the literature will also find it very handy in many ways.

There are several walking tours fully described, as well as short histories of various things Scottish: whisky, food, etc., and typical of what you might expect of a tour book, but handily placed and to the point.

There is also an overhead street map with pin-point place markers. You can roam some of the streets and click to see a wee bit of information about various locations not necessarily part of any particular tale per se.

There is also a section devoted to his books – listing each with a brief description. I’m sure that after visiting the city, you will want to pick up the books – and visa versa. If you are a stranger to Scotland and know the books well, then you are in for a treat.

I do have one serious complaint and really do feel it is something that not only should be corrected, but would probably be easily done.

On the list of walking tours for instance – you can go through the tour, look at the photos, etc, and at the end of each section is directs you to the next walking tour on the list – the problem is, you can’t directly follow through – you must instead go back several steps till you get to the list and then make a choice. I think it would be much more user friendly to have a direct link at the end of each section that allows you to either go forward to the next section OR go back to the list itself, instead of taking several steps backwards. It’s a mystery as to why this wasn’t done.

Perhaps Rebus can be called upon to investigate and solve this admittedly minor “crime.”