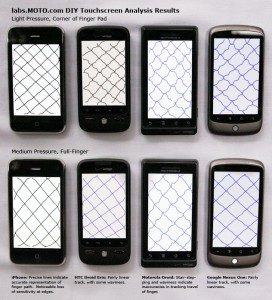 You may have seen a test posted to the net sometime back from a lab worker at MOTO Development Labs purporting to show that only the iPhone touch screens could reliably draw straight lines (at least when done in a diamond grid pattern).  Original demos were done by hand. Now a new demo was done using a robot arm that was supposed to show a more objective and scientific demonstration. You’ve seen this on various sites who should have known better than to reproduce such an article without independently verifying the results. I set out to try to verify the results and found only fail.

I hate to burst the bubble – but the science was completely flawed and the results can not be reproduced. The original test had many left readers confused and unable to reproduce the results, the new test provides more information, including the drawing software used, but is just as flawed and also not reproducible.

I have all but the Blackberry Storm used in these tests. I’ve tried, now using the same software listed, and can’t reproduce MOTO’s results in the slightest.

All the phones draw straight lines with no problems.  Even in a diamond grid pattern.

When the first claims were made I tested then and I have tested again now that I have more phones and a list of the software used. Same results – all the phones draw straight lines and more importantly – the results don’t match the test displays at all.

Regardless of this, the science is simply poor in the following areas at least:

Despite the use of a robot, since the screens have different sizes, even automated drawing would be readjusted per machine. Also, the broken lines on the phones indicate loss of contact since even fast drawing simply results in the software packages connecting a line between each sample point. So far as I could tell, although I did not contact the software authors, the software only breaks a line when no touch is registered. I suspect the robot ‘finger’ had poor compatibility with the touch surface.

Ultimately, these aren’t monitors running the same signal from a single baseline computer platform. They’re completely different devices with no actual points of commonality except in generalities. To attempt this sort of comparison was flawed to begin with and the fact that the results aren’t even reproducible elsewhere makes this a wasted exercise and has spread confusion instead of shedding light.

Finally – are there issues with screens on the phones? Yes. But not the issues presented. Droids, and other capacitance-based soft-button Android phones, have occasional issues with registering a button touch. Nexus Ones have issues with multi-touch of three points or more. And, sit down for this one, iPhones have a documented issue with half the screen on an iPhone ceasing to register touch at all and requiring replacement. But the technology on all of these phones is pretty fantastic and only getting better. We’re really all winners here.