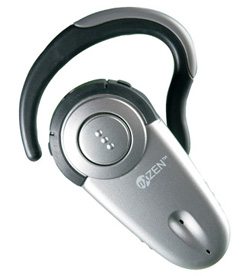 As Bluetooth Headsets get more and more common, and as more and more phones adopt Bluetooth 1.2 technology, the headsets get better and better. The number of headsets in the marketplace also is increasing exponentially. Since few are available to actually try out with your phone, how do you decide which one to buy? That’s were we come in – read our reviews and take a close look at a new model to hit the shelves – Gennum’s nXZEN 5500. Read on for my full review.
The official line from the Gennum website is:

The nXZEN(tm) PLUS model adds stereo playback from MP3/CD players, and mutes when answering a call.

What’s in the Box?

The nXZEN is one of the more complete kits I have tested. The nXZEN ships with the headset, a real AC adapter, a USB cable, a mini disc with manual, multiple earloops and ear pieces, a quick reference guide to the buttons and a stereo headset (model 5500.)

Setup and Ease of Use:

I had read one review of the nXZEN saying that it was almost impossible to use with the Treo 650 but great with every other phone. Since my test device is none other than the Bluteooth challenged Treo – I was a bit nervous. That was all for naught, as paring was as easy as can be. Unlike other headsets, there is actually a separate button used for pairing as opposed to the ‘one button for all’ method applied by other manufacturers. Pairing worked on the first go round – just locate the headset using the Bluetooth setup on your phone, plug in 0000 and you are set to go.

The nXZEN has all the options you could ask for in a Bluetooth headset and then some. The headset supports both standard headset and hands free protocols. So, on a phone like the Treo, which can utilize a true ‘hands free’ protocol, calls will automatically go to the headset without the user having to push any buttons whatsoever. On other phones, a simple push of the side button answers the call.

The advanced features of the 5500 are very cool. The 5500 ships with an additional single ear piece and a jack which connect to your MP3 player and a jack that goes into the headset. So, you can have the headset on one ear, the earbud in another and be hardwired into your music player and wirelessly connected to your phone. When a phone call comes in, the music is automatically muted so you can take the phone call. The only problem is that audio quality is not great at all through either the earbud or the headset and you look kind of silly with two different things coming out of your ears. Another cool feature is that there is a software controlled graphic equalizer which allows you to customize the sound in both music and phone operation modes. Just install the application and connect either via the usb jack or a Bluetooth dongle and you ‘program’ the headset’s equalizer settings.

The nXZEN is touted by the manufacturer as being the most technologically advanced headset on the market today. The claim is made based upon the DSP (Digital Signal Processor) technology used in this headset. The nXZEN uses twin microphones and the ‘FrontWave Extreme patented algorithm.) How does this work? I couldn’t explain it to you if my life depended upon it – BUT – the Gennum website has some very cool audio files you can listen to which help show how effective it is.

The bottom line is that in ‘real world’ tests, people could hear me better using this headset than any other headset I have tested – period. I could also hear very well. I tried rolling down the windows and turning up the radio and people on the other end had no trouble hearing me and not the noise around me – very cool.

This is great little headset. The size is small (not as small as the Bluespoon AX2 – but smaller than the Cardo and others tested and it was very easy to use and pair with my phone. It was comfortable to wear and people could hear me – which is probably the most important fact of all. It is more expensive than other headsets on the market – it retails for $149.00 but can be found for less on the web. The bottom line is that this headset is one, if not the best Bluetooth headset I have ever tested.

Over all Grade: A