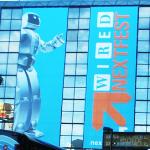 This past weekend I was at the NextFEST in New York. And I know I had a good time because I still have sore muscles. I got there as early as possible and as I was picking up my Press Pass I noticed people walking about with small square plastic tags around their necks. These were lit up and quite attractive. It turns out these were for exhibitors. The Press only got paper tags that you stick on your clothes somewhere. Very low-tech. Ah, well. While I was coveting those cool neon-like tags I looked around expecting an array of gadgets. As it turns out the only gadget at the show was the BlackBerry Pearl 8100.

It has the usual features of a smart phone Plus supporting quad-band GSM/GPRS networks. Voice command dialing, Bluetooth (Yeah!), Email, text messaging, video playback, a microSD card slot for memory expanding (Yeah!) and a 1.3 MegPxl camera. It can browse the web and there’s “BlackBerry Maps” which can be downloaded. In my hands I thought the buttons seemed a bit small, but from experience I know every device needs time to get used to. Anyway, I may revisit this device later for a fuller review.

I didn’t stay long playing with the BlackBerry because so many other things were beaconing me. I’d say the theme of this NextFEST event was renewable energy. And robots. Tons of robots!

I think I’ve seen the Einstein robot head before – probably a TV show. The walking robot – HUBO – has added the Einstein head (Hanson Robotics) resulting in “Alex HUBO”. There’s something disconcerting about an expressive, ambulatory robot. It has cameras in it’s eyes so it “knows” where it is and who is around. And somehow the designers seem to have imparted this thing with a sort of personality.

And if you think THAT is spooky, get a gander at this real looking female Asian robot.

Actroid is bilingual, speaking Japanese and English. It’s being marketed as a receptionist and a nanny. I know some of you have other ideas. It’s been installed with a sense of humor, too. As it moves and talks it slyly makes clever comments. And it LOOKS directly at you. Creepy! I read I Robot when I was in school, but seeing something like this in person is entirely different.

For those that feel a need for a robot pet, Paro is the….cat’s meow? Designed to have a body similar to a baby seal – ’cause they be SOOOO cute – this robot moves when petted, makes sounds and in general responds to affection. Just as I was nearing the display a child was shown this robot by her father (at least I assumed he was related). She was talking to the fuzzy, cooing robot like it was real. I don’t know if the picture I took can convey how she was Riveted by it. I didn’t stay to find out how her dad extricated his daughter from the robot, but it must have been loud.

No matter how you may feel about these robots, they ARE effective. They are designed as companionship for the elderly or those who are ill. Pets are healthy for most people so it does make sense to have a animal facsimile in situations where a dog or cat could be too much trouble to clean up after.

There was also an array of disembodied robots. Including a robot hand that can roll an egg between it’s fingers without breaking it. You really can appreciate the complexity of your own body when you see others trying to imitate it. All these clever and talented engineers and designers get quite close to this impersonation.

At first the Partner Ballroom Dance Robot (see the video) seems a bit ridiculous. But the engineering exercise was to make a robot which responded to a persons’ motions. In this case dancing in which the robot “follows” and anticipates the humans lead. Other applications – less romantic – are robots which help the infirm or elderly walk.

Believe me, there’s was lots to see and I’ll continue my review of NextFEST in another article. My head is still spinning and I need a break. In fact, at the FEST right in the middle there was just the thing to distract one from all this technology. Coca-Cola must have decided that the Starbuck crowd would like coffee in any situation and configuration. So they added coffee to their soda. When I saw this I figured drinking it would keep people up for two weeks!

The bottle is designed to look “sexy” (for a soda bottle, anyway). They were handing out free samples. Now, I’m not a soda drinker, but I do like FREE. So, I figured I’d try it. I do like iced coffee and this “Coca-Cola Blak” tastes like iced coffee with fizzy in it. It’s not bad but not really my taste. And it didn’t keep me up for two weeks.

I have had Caf