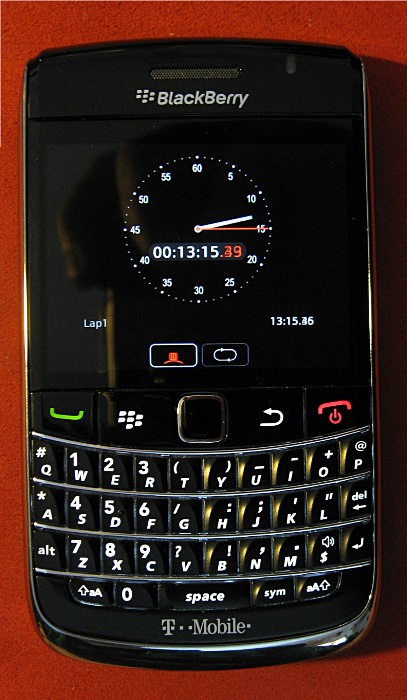 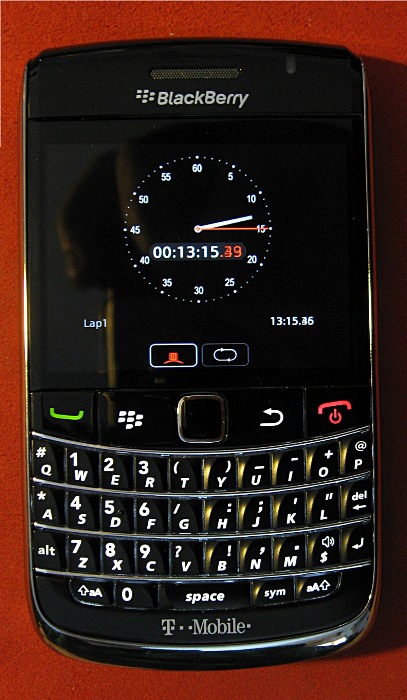 By now everyone has to know what a Big Fan I am of BlackBerry’s so it’s no surprise I am enjoying this BlackBerry® Bold 9700 on the T-Mobile Network (3G, EDGE, GPRS, WiFi). The Bold feels Slightly heavier than the Curve and has a nice leathery texture on the rear cover. The main external differences is the buttons at the top of the devices. On the Curve these are the audio controls: play, pause, forward….works great. On the Bold this is where the Lock Key (left side) and the Mute/Standby or Play/Pause media (right side) buttons are. I have to say this is Ubber convenient. I don’t have to look at the device to make sure it’s been locked. I can just feel it.

When I received the Bold I noticed I was having a bit of trouble with the SD card not being read by the phone. SO I took it out of the phone and inserted in my computer. It looked fine. There were the usual BB directories with nothing in them, but otherwise OK. I then reinserted the card in the phone. And it said there was some problem with the card and asked if I wanted to “fix” it. I figure, sure, why not? It did Something and voila, SD card was readable by the phone. well, that was easy! It has worked just fine ever since. Which is a good thing as it’s not easy removing the SD card. sure it’s right there at the top of the device when you remove the cover. But for some reason I had a bit of trouble sliding that little bugger out. But as I can access the files on the Bold via the USB cable there’s never any need to remove the card. Unless I want to insert a large one.

As with the Curve there’s Set-up Wizards to help with whatever feature you need. Easy as Pie.
Of course I added a couple of my email accounts and naturally this feature works great. There’s an amazing amount of flexibility with regard to having sounds alert you to emails/messages, and adding lights – creating Profiles to your needs, etc. I like being able to delete an email on the server AND the phone with the same click. (That seems to be something Robin Quivers doesn’t understand and unless you listen to Sirius radio you aren’t going to understand that reference.) It really is amazing. As I mentioned in my article for the Curve, trying to sync the Contacts and the Calendar is a bit tricky. I still can’t quite get the Contacts to be as exact as I would like. And as you Have to let the BlackBerry® “duplicate” entries in order to sync I often end up with several duplicates to some of my Contacts. Google Sync doesn’t work on the Bold – I’m not sure why it seems to work on the Curve. However, when I established a email setup with my gmail, wireless Syncing began. Not perfectly, but at least I got Something!
Now, synicing your calendar is easier. But only if you use Google Calendar. If you do then go here http://www.google.com/calendar/render and log into your account. Go to your Calendar Settings/Mobile Setup. After inserting your mobile phone number you are sent a verification code to your phone which is a number you place back on the web page in the correct field. It appears that the data goes in one direction. From the Google Calendar to the BlackBerry® and not the other way. I am assuming right now that this is on purpose. It sort of makes sense. I keep repeated dates like birthdays on the Calendar, or important dates like when my brother’s band is performing. Those sorts of things get established when I am on a computer. Although it would be nice to sync particular items individually right from the phone.

One of the cool things with having two BlackBerry’s® is the opportunity to communicate between them. Of course I tried to transfer contacts between them and there just isn’t an easy way to do that. I could send messages or emails, but that’s not what I consider “easy”. I can transfer ring tones from one phone to another. I have to tell it where I want the tones saved to for every single ringtone which is slightly annoying if I have a bunch I want transferred. But it does work.
And the way it works is via Bluetooth.

It’s easy to pair any phone to any Bluetooth device but can get tricky when you have to set one phone to Search while you set the other phone to Listen. It’s kind of a twohanded operation. But I have done it, so it IS possible. And pictures can be sent the same way.
Normally Bluetooth is used for talking and that operation works very well. I have to drive various members of my family around and having a Bluetooth enabled phone is wonderful. The phone rings although I usually hear a click in the Bluetooth device just before the ringtone sounds off.

Like the Curve the Bold has WiFi and using it is also a Piece O Pie. I accessed my home WiFi and even tried other signals like the ones you find in those free WiFi cafes. One question some people have is does the phone use WiFi when receiving emails and sending emails even if the phone has a strong 3G signal. Well, sure. Just change your settings. The phone can be WiFi only, WiFi preferred, Mobile Connection Only, Mobile Connection preferred. The included browser will still use the mobile data connection unless you go into the options and change it Hotspot Browser.
The phone automatically connects to WiFi if it’s near a T-Mobile HotSpot Location.

The BlackBerry® browser is fine but those of us who use Opera having that on ones phone is a huge plus. You can download OperaMini 4 or try out OperaMini 5 Beta2. It starts out with the Opera SpeedDial and you can add whatever favorite sites right there. I added FaceBook and easily made FB comments from the phone. It’s generally fast. I then tried out viewing a YouTube video. It asked permission to stream then started the media player. Compared to the way phones tended to play UTube vids this is a vast improvement. Very very smooth. Me Likie.

There”s those things I use everyday and I appreciate when they work just nicely. The Calendar is one of those features that just LOOKS way better now. I generally prefer the Weekly View because as I scroll over each day whatever appointment I happen across is detailed at the bottom of the page. It’s much easier to look over the Agenda view. I can set it so it only shows the existing appointments and not empty days. I can switch between more than one calendar or combine them. I can pick the appointment colors. 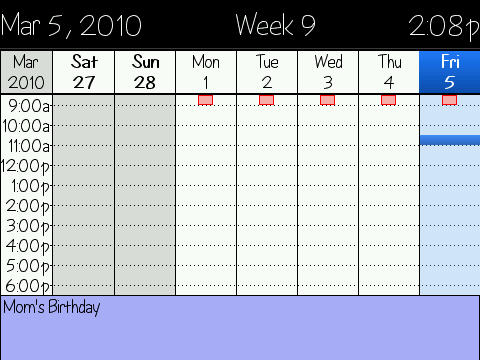 The clock and the stopwatch and the timer each have a variety of faces to choose from. And choose I DO! I get bored with the same old thing. And I like having a stopwatch on a cell phone. It’s one of those things you rarely use, but when you NEED it, it’s just wonderful the have it. 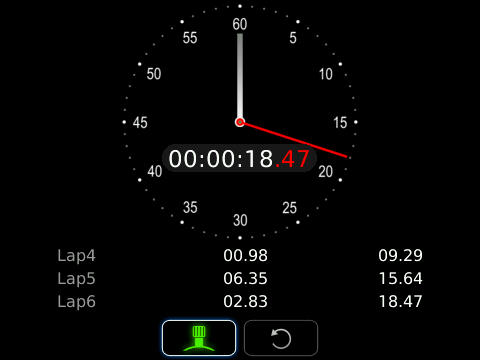 When I had the privilege of using the BlackBerry® Pearl some years ago playing music and Avi’s was sometimes a bit of a struggle for the device. That is all a thing of the past. 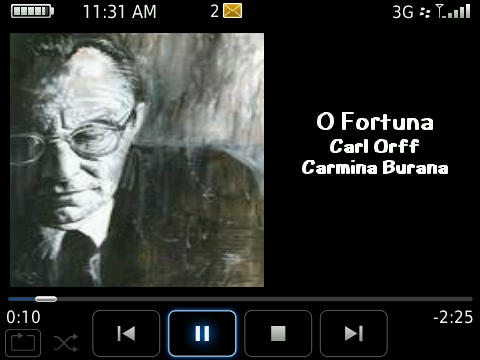 If there is one thing I use often it’s the calculator. And this one is a beauty. And I mean it’s beautiful to look at. The colors make it very easy to read. I can navigate the numbers with the trackpad or with the keypad. And the menu has a list of conversions. Wow. I love this calculator. 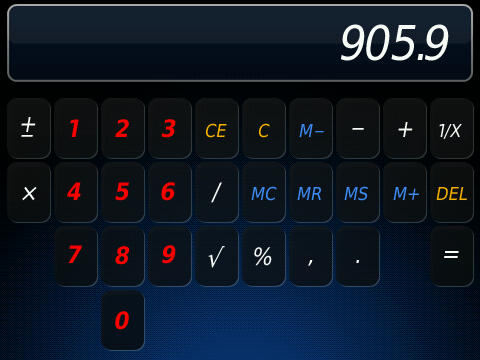 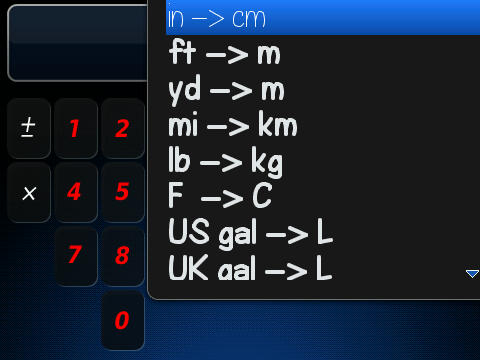 Next time we look at the software for tethering and moving file and whatnot. More Bold Coolness coming!