Your clones are very impressive. You must be very proud. 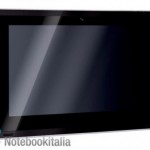 Toshiba has thrown their hat into the new generation of clone Apple wars, and are expecting a release of their new pad/tablet system sometime late September or early October. The Italian site, NotebookItalia.it, got a few photo leaks of the device as well.

Specs-wise the new tablet looks to be a capable device, registering in at 10 inches. Further, the device will sport HDMI, USB, and Android.

Rumors abound that it will support a new Tegra 2 (NVidia) chipset. More information as it becomes available.