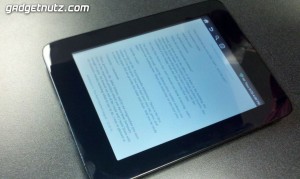 We just got back from a visit to Velocity Micro’s Richmond, Virginia headquarters where we were given full access to their new eBook reader the Cruz Reader. We’ve reported on this upcoming device before – but this time we had a lengthy hands-on experience with what promises to be the most capable full color Android eBook reader on the market. We’ve got the specs, we’ve got the photos and even a quick video!

Let’s get the official specs out of the way:

Now we can add to these. First off, as to be expected, this isn’t the powerhouse of tablets because it’s a eBook reader first and foremost. That said, it’s far more powerful than similarly priced imports. It’s processor (brand not specified) is just 523mhz … but (unlike the some recent import tablets) it comes with GPU acceleration so the processor isn’t having to do all the work. The GPU handles the graphics and video so in operation this feels like a Motorola Droid, or perhaps a Droid Eris, in processing speed, while the graphics display remains smooth and quick. We did test internet connectivity over the Wifi and it was very quick. Unlike the imports.

Secondly the touchscreen is a resistance touchscreen. Others speculated that it would be capacitive but at this price point that wasn’t likely. That said, the screen is more responsive than other resistance touchscreens we’ve tried and since this is a eBook reader it’s more than up to the tasks required of it. There are also no buttons on the screen. The usual four Android buttons are moved to the status bar – but work very well there. The display itself is a 7″ diagonal TFT display in a 4:3 aspect ratio.

The battery life, in testing, performs well doing 6 hours of continuous video playback. Reading gives 10 hours, in standby the device will hold a charge for 36 hours! If that’s not enough – no problem. The battery is user-replaceable and behind the back panel which is easily removed. Pop out the SD card, pull out with your finger in that slot, and the panel pops right off.

In the unit we tested there was a hidden feature that we hope is in the production unit (no promises) … the Reader’s internal memory was on a user-changeable micro-SD card. So the Cruz Reader actually has an expandable internal AND an expandable external memory card!

Around the edges of the Reader you’ll find volume controls, power button, headset jack, power jack, mini-USB port and a pair of stereo speakers. The whole Reader fits nicely in one hand like a small hardback, or trade paperback, book and feels exactly right.

Velocity Micro tells us that this was designed completely in-house by their engineers.  They also have big plans for their tablet line which begins with the Cruz Reader and the Cruz Tablet (we will cover the Tablet in the next week or two).  Check out our exclusive first-look gallery of pictures below and our video.

This report was prepared by Kermit Woodall and Michael Prost – Video, Images and Text may be reproduced with proper attribution.