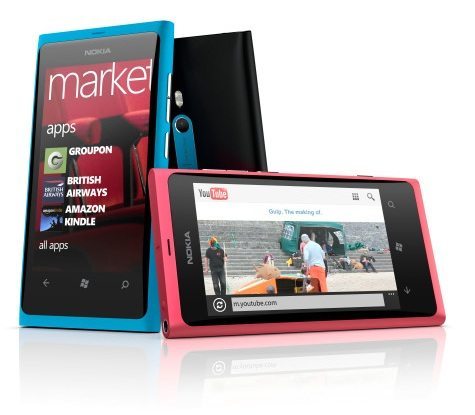 Recap and commentary on Lumia 800 (and comparison to the N9)

Nokia just announced the Windows Phone based Lumia 800 smartphone. There were some rumors floating around about a Lumia 900 devices, but I doubt that’s going to happen at this Nokia World as the biggest announcements usually happen on Day 1. This means that the Lumia 800 is going to be the top dog for now. Here’s a quick recap and commentary of those important bits and pieces.

–Lumia means light, signifying “a new dawn for Nokia.” I love the name! It’s easy to remember, and sort of gives the line a “face” and some personality. I also have a feeling that Nokia’s smartphone line is going be all about names that have something to do with light, so you probably can expect names like Aura, Sun, Ray, Beam etc in the future. Giving the line is also much easier remembers than numbers. Nokia didn’t complete depart from the numbers, these stay indicating the position of the device in the range.

-Design: Think of the N9 in terms of design, the same polycarbonate plastic unibody construction and curved glass, but this time with Windows Phone 7.5 Mango. The N9 is easily one of the best looking devices on the market, praised by almost every review for it’s beautiful design. The 800 continues with this design language but with a smaller 3.7” (instead of 3.9” on the N9.) The 800 and N9 have the exact same dimensions of 116.45 x 61.2 x 12.1 mm and the exact same volume of 76cc, but the 800 weighs more at 142 g vs the N9’s 135g.Question is, why the smaller screen of the body’s dimensions are exactly the same? As you can see from the image above, it’s really hard to tell them apart. But if you look closer, the Lumia 800 has a camera shutter button and a smaller screen.

-Colors: It comes in three colors: Cyan, Magenta and Black, the exact same colors as the N8. No surprises here, as the as Nokia’s recent trend has been all about bold bright colors for everything from the N9, N8 and even accessories like the Play 360 and Luna.

-Price: The estimated retail price of the Nokia 800 16GB is going to be around 420 Euros, which is a bit lower than what we usually see from Nokia’s flagship. In comparison, the N9 16GB version at the time of shipping was about 480 Euros.

-Battery: At 1450mAh the battery might seem on the small side, but considering that this phone is not running a dual core processor and Nokia’s ability to squeeze a lot of battery life out of relatively small battery, it probably won’t last really long, but it should get you through an entire day with heavy usage.

-Performance: Under the hood there’s a Qualcomm S2 MSM8255 Snapdragon/Scorpion 1.4Ghz (single core) processor paired with an Adreno 205 GPU. In terms of current landscape, the Lumia 800 specs are mid-end, but again considering Nokia’s ability to squeeze a lot out of lower-clocked CPU’s the 800 should be fast. Also ad the fact that unlike other platforms, Windows Phone seem to run quite speedy with single core 1Ghz processor, so the 800 should be plenty fast. Andy Lees in an interview with AllThingsD did say that Windows Phone 7.5 devices will be “all single core, but I suspect that they will be faster in usage than any dual-core phone that you put against it, and that’s the point.”

The use of a single core mostly has to do with Microsoft specs requirements for Windows Phone Mango, but it also means that the 800 should get good battery life out of a relatively small battery. As for the graphics, it should be enough for the most recent games, this is the same chip found on a dedicated gaming smartphone like the Xperia PLAY

-Video: While the 800 has the HD video capture, it’s running a bit behind with “only” 720p video as many smartphones are starting to push 1080p.Nokia has yet to produce a device that can do 1080p video capture, but this leaves some room for what undoubtedly will be a 900 or 850 device. 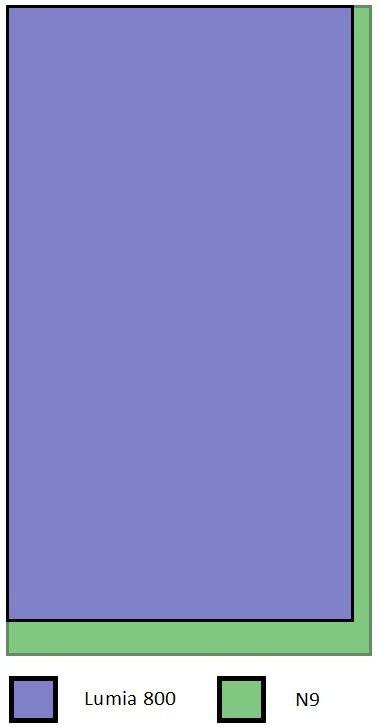 -Screen: A 3.7” in screen, as indicated earlier, smaller than the N9’s 3.9” screen. The N9 also has a much higher screen res at 854 x 480 pixels, while the 800 has 800 x 480 pixels. It’s an AMOLED screen that uses the ClearBlack technology, so basically same great display as the N9. The difference in size becomes clearer from the image above, not a dramatic difference, but one that you will definitely notice.

Software: I thought Nokia would bring more customization to Mango, but in this case it was limited to Nokia Drive, Music and ESPN Sports Hub. I would get the 800 just for the Drive navigation alone as Nokia has about the best navigation in the business and it works completely offline. This makes the Lumia line the only Windows Phone with full navigation built-in. I thought Nokia Drive was going to be part of Bing Maps on Mango software, but apparently it’s not and is a Nokia exclusive.

-Camera: The same 8 megapixel camera as the N9 and 720p HD video with continuous autofocus. Yes it’s also the same f/2.2 aperture lens. Not N8 level quality, but it should be pretty good. The 800 does lack a front facing camera. Now that Microsoft own Skype and will surely make it a key part of Windows Phone, not having a front facing camera is a big negative point.

-NFC: The N9 had NFC, Nokia now has a several NFC enabled accessories and has the largest range of NFC enabled, so why isn’t the N800 NFC enabled.

Overall the Lumia 800 looks like a solid device with the amazing hardware and design borrowed from the N9. Coupled with the modern UI of Windows Phone it should help push those sales numbers for Windows Phone. A look at the specs however suggest the 800 to be more of a Mid-end devices, indicating that Nokia should have a device with high spec and price with a dual core CPU in the near feature. On the other hand one could argue that in terms of Windows Phone specs, this is as good as it gets, which up till now has been all about fast performance from mid-end hardware. However the lack NFC and a front facing camera are big omissions in my opinion.