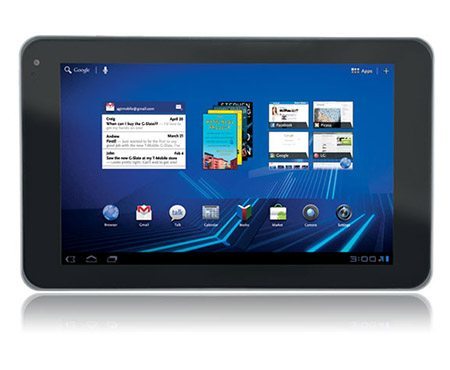 The LG G-Slate, a T-Mobile exclusive brought to market only a year ago, is obsolete. Not only is it no longer sold on T-Mobile’s website (although storefronts may still be closing them out), but from all indications it will not receive an official upgrade to Android 4.0, Ice Cream Sandwich. But even when this device first shipped, it was arguably obsolete out of the box with outdated camera technology and an archaic wall wart power supply. The sad thing is that it didn’t have to be this way, but the G-Slate is just one more example of designing to a checklist of features instead of to the needs of the user.

Out of the box the G-slate is an attractive device. It feels sturdy and sleek with an attractive glass front. On the back what first attracts attention is the brushed aluminum Google logo inserted into the plastic black matte finish. A T-mobile and LG logo are silkscreened on the back, but the device’s name is strangely absent. Two cameras on the back instantly signal 3D imaging capabilities and their orientation are a strong hint as to how the tablet was designed to be held.

On the front, a camera is situated in the upper-left corner instead of being centered like on the iPad. The 1 pounds, 7 ounces feel solid in the hand–weighty without being heavy. No buttons adorn the front. A volume rocker switch is located on the top horizontal edge, along with tiny hole for the mic. On the bottom edge are an HDMI port (a cable is included in the box is an appreciated touch), and a micro USB port. A small, clicky power-button sits out-of-the-way on the left vertical edge. On the same side, and also unlabeled are a 3.5mm headphone jack and a DC power port for the included wall charger. A single speaker grill on the left, and two on the right, are perfectly positioned to be covered by the user’s hands as they hold the G-Slate.

As an Android 3.0 device, the G-Slate is fast. A dual-core, 1GHz ARM A9 with an integrated 3D chipset makes the G-Slate a snappy multi-tasker and competent game console. The G-Slate comes with 1GB of RAM–twice as much as the rival iPad 2, if that sort of thing is important to you–and 32GB of built-in storage, which is plenty for most users.

The 1280 by 720 screen is vivid and crisp, protected by a layer of scratch-resistant Gorilla Glass. The handsome Honeycomb interface runs smoothly, and there is no lag switching between applications. The native Browser application is adequate for most web browsing tasks; however, the bezel design of the G-Slate is narrower on the long sides causing the tablet to be awkward to hold for portrait-oriented browsing.

NOT A TABLET FOR YOUR GRANDFATHER

If picked up at a closeout price, the G-Slate would be better appreciated in the hands of someone comfortable with troubleshooting the myriad number of bugs and quirks that sometimes throw up unexpected roadblocks.

The G-Slate user guide is available to download from the T-Mobile site, but the box containing the review unit did not include any documentation. Within, the guide warns that the G-Slate can only be charged through the wall wart, not through the USB port. How such a device can be released in 2011 is a mystery to me, and constitutes a serious deficiency in the usability of the tablet.

When the G-slate is completely drained of battery, it flashes a red icon on the screen for several minutes before booting. I watched with growing certainty that the G-Slate was DOA, but after a few minutes the cheerful T-Mobile chime sounded and everything was okay. At least, until I tried to setup my Google account. The G-Slate’s internal clock set itself to 2008, causing security certificates to silently block my setup attempts. Manually setting the clock got me past the problem, but the solution was one I stumbled on by luck.

Once my account was setup, I was pleased by the easy access to the variety of Google services I use daily, including Gmail, Reader, and Images. Concerning Images, I was surprised by how quickly the G-Slate was able to load my galleries, and pleased by their thoughtful presentation and ease of navigation.

The camera application locked up badly enough that the application manager was helpless to fix it. Resetting the G-Slate brought the camera back online. Not that having access to the camera was necessarily a blessing.

Most ordinary users will find the small but not uncommon glitch to be a steady source of frustration in owning the G-Slate, and even true gadget nuts will grow impatient with the lack of polish.

Two 5 megapixel cameras on the rear of the G-Slate are set apart about the same distance as a pair of human eyes. The cameras have a stereoscopic view of the world, enabling support for 3D imaging. In theory this could open the door to some unusual and creative photography. In practice, the red-blue anaglyphs aren’t very satisfying to watch due to washed-out colors and exhaustion in forcing the eyes to focus on the artificial dimensionality.

For those who want to shoot old-fashioned 2D pictures, the G-Slate is still disappointing. While shooting indoors, even under bright lighting, the G-Slate produces noisy, blurry pictures. Turning on the LED flash only makes the problem worse by adding narrow hotspots to the image. The G-Slate just isn’t the device on which to capture fond memories.

The front-facing camera is just as muddy as the twins in the back, and presents its own oddness. The front camera is on the top-left corner while holding the tablet in landscape orientation. For a use like video chat, it’s difficult to keep the user centered in the frame, necessitating the camera be held at about a ten degree angle from the natural position. The user, even when looking directly at the screen, appears to be thoroughly disengaged, staring off at something at the direction opposite to the camera’s placement. A centrally placed camera would have fixed that, but its compromised position is probably meant to be a compromise for users who want to hold the G-Slate in portrait mode. It just doesn’t work.

But for a few incomprehensible design choices and not-quite-ready for prime time software, the G-Slate is a decent device. Unfortunately for LG, Android tablet makers are filling the market with a wide variety of better hardware. The strengths of the G-Slate include its quick processor and crisp screen, but those aren’t enough to make up for the inclusion of bad cameras and the lack of ICS upgradeability. The G-Slates faults pull the tablet into the below average range, but the right user will probably appreciate the G-Slate if they can find one at a good price.

Bottom line: Despite the pitiful cameras and the foreclosed upgrade path, the G-Slate is a fast tablet with a beautiful display. Glitches often worm out of the woodwork, but if a tolerant tech person finds one of these for a discount price, it’s worth picking up.