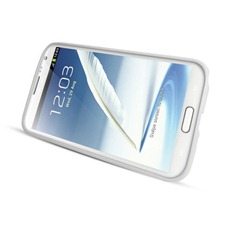 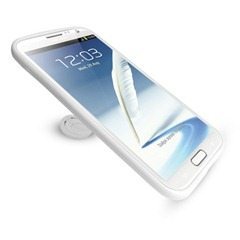 The GadgetNutz editorial staff rates the Galaxy Note 2 as perhaps the finest Android phone currently on the market.  It’s little wonder that a device of this quality has been flying off the shelves. When a phone becomes as popular as the Note 2, third-party case solutions are rarely far behind.

All this month we’ll be looking at Galaxy Note 2 cases.  First out of the gate is one of the most interesting cases we’ve seen for any phone, the The SD Smart Stand from Mobilefun.co.uk.

Does the Note 2 need a case? It’s true that the Gorilla Glass 2™ front of the Note 2 is largely immune to scratches, and while the plastic rear battery panel can be scratched, it’s also easily and cheaply replaced. The real Achilles heel of the Note 2 is the chrome bezel. As this writer can personally attest, a drop of any distance onto a paved surface can quickly and permanently mar an unprotected Note 2’s bezel. Based on our experiences, those wanting to keep their Note 2 unscathed would be best served by some manner of case or bumper.

At first glance, the SD Smart Stand looks and feels like many other TPU (Thermoplastic polyurethane) cases. TPU cases do a great job of protecting the sides and backs of phones from drops, spills, and scratches. At roughly 2mm’s thick, the SD Smart Stand is a bit thicker than some TPU cases we’ve tried and thinner than others. It is easily fitted and removed while being well enough attached to never worry about it falling off without a purposeful effort.

The stand-out feature of the SD Smart Stand is, unsurprisingly, the stand. When a stand is desired, an internal spring mechanism located within the case bends a portion of the backing into spiral curve. The stand deploys with the push of a button.  Once engaged, the stand provides a firm base for viewing in both landscape and portrait mode. In landscape mode, the phone sits at an angle roughly 30 degrees off vertical. When used in a portrait mode, the phone stands at at lower angle, about 30 degrees off horizontal. 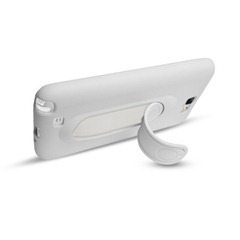 The SD Smart Stand has cutouts for each of the Note 2 features.  Including cutouts for the camera, flash, headphone jack, microphone, speaker, charging port, and stylus.  Unlike some Note 2 cases we’ve tried, the stylus opening is well designed, allowing easy removal and insertion of the S Pen.

Is it durable?  We had absolutely no plans to test the durability of this case.  At GadgetNutz, drop-tests really aren’t our thing. Despite our best efforts, forces conspired to drop an SD Smart Stand Note 2 onto the hard pavement from a 3 or 4 feet distance.  The result showed no damage to phone or case. Then on another occasion, a Note 2 enrobed in the Smart Stand was dropped into a puddle of snow melt, once again, no damage to phone or case.  Though in this latter case, the SD Smart Stand did need a bit of cleaning with soap and water.  We’d also strongly recommend that the case be immediately removed after any liquid contact as the hole needed for the stand mechanism could provide a path for water intrusion.

Pros:
Real protection against drops and small spills.
Intriguing and easy to deploy stand that works well in both portrait and landscape modes

Cons:
As with any case offering real protection, the SD Smart Stand will add about 2 millimeters of thickness

See all the cases at Galaxy Note 2 Cases