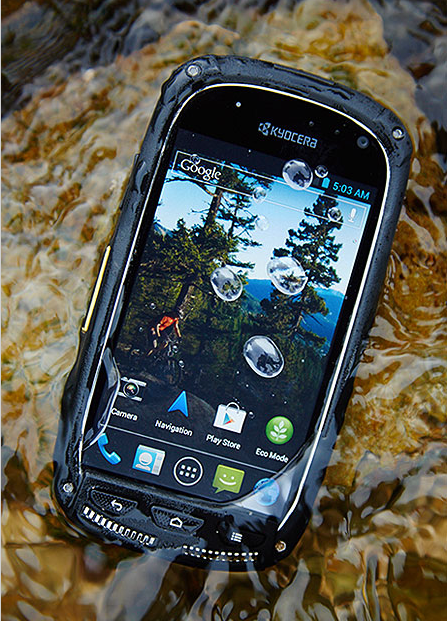 Kyocera Torque – Drops, Dunks and Spills into Sprint on March 8 for $99.99

The ultra-rugged, 4G LTE Android™ smartphone will be available in all Sprint retail channels, including Web (www.sprint.com) and Telesales (1-800-SPRINT1), for $99.99 after a $50 mail-in-rebate via reward card, with a new line of service or eligible upgrade and two-year service agreement (pricing excludes taxes). Powered by Android 4.1, Ice Cream Sandwich, 4G LTE speeds and up to 18.9 hours of talk time, this device will benefit from Truly UnlimitedSM 4G LTE data, text and calling to any mobile device with no metering, no throttling, and no overages, all while on the Sprint network.

Torque is built to Military Standard 810G (MilSpec) to withstand dust, shock, vibration, solar radiation, humidity, blowing rain, low pressure, salt fog and extreme temperatures, along with IP67 standards for dust, sprayed water and full immersion of up to one meter deep for up to 30 minutes. It features Sprint® Direct Connect® push-to-talk service and is America’s first phone to include Kyocera’s award-winning new Smart Sonic Receiver technology, which transmits sounds not only as traditional sound waves, but also as vibrations carried by body tissue directly to the eardrum and inner ear for unparalleled sound clarity even in the noisiest environments. Torque is designated Sprint Professional Grade, which ensures advanced security, device management and Exchange Active Sync capabilities are protecting data on the device and over Sprint’s nationwide network.

“The durability and sound quality of Torque are amazing for a 4G LTE smartphone,” said David Owens, vice president-Product Development, Sprint. “Whether you’re on a construction site, an outdoor adventurer or a mom that worries about their kids breaking their phone, Torque can hold up to those drops, spills or dunks. With Sprint’s 4G LTE network and truly unlimited 4G data, text and calling plans, it’s a tremendous offer for business customers, busy kids and adventurers alike.”

In keeping with Torque’s ability to tackle the extremes and everyday life, Kyocera has sought the help of Bear Grylls – Everest mountaineer, former British Special Forces, star of television’s “Man vs. Wild,” and the father of three active boys. See Grylls take Torque on a series of “adventures” ranging from biting snow, spraying water and mud to a day of splashing in a water park full of kids :

“Bear Grylls is the ultimate survivor, in both his extreme adventures and the challenges he deals with day-to-day like the rest of us,” said Eric Anderson, senior vice president and general manager of global sales and marketing at Kyocera Communications. “Most of us know him as an intrepid adventurer, who has withstood the most extreme environments, but he’s also a businessman and a parent, and he appreciates the value of a smart, rugged device like Torque that can seamlessly support those different sides of his lifestyle.”

In 2012, Sprint added more coverage area to its Sprint Direct Connect push-to-talk service – creating three times the push-to-talk coverage of its Nextel National Network – with the addition of roaming and Sprint 1xRTT coverage areas.2 The expansion of the Sprint Direct Connect network also marks another milestone for Network Vision, Sprint’s nationwide network upgrade using the newest, most advanced equipment in the industry. Sprint plans to consolidate multiple network technologies into one seamless network with the goal of increasing efficiency and enhancing network coverage, call quality and data speeds for customers.

Sprint introduced its all-new 4G LTE network in July 2012 and now offers service in 58 markets. For the most up-to-date details on the Sprint 4G LTE portfolio and rollout, please visit www.sprint.com/4GLTE. For detailed 4G LTE maps, providing coverage information right down to the address, please visit www.sprint.com/coverage. Customers are encouraged to check back often, as the maps will be updated when coverage in these markets is enhanced.

For more information about the Kyocera Torque, please visit http://www.kyocerasmartphones.com/torque or www.sprint.com/torque.