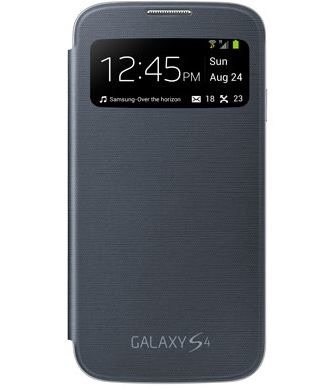 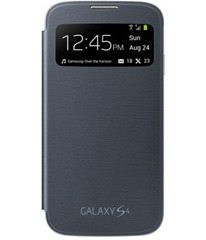 In this part two of the Samsung Galaxy S4 Review we’ll take a look at the S-View Flip Cover which by now seems to have become synonymous with the Galaxy line. See someone with a Galaxy device and chances are they’ll have one of those Samsung Flip Covers, just like iPhone users are known for their bumper or jelly cases. While Samsung has been offering the Flip Cover for some time now, the concept of the S-View Flip Cover is fairly new and was just recently introduced with the S4. It’s basically the same flip cover, but with the addition of a small clear plastic windows that allows you to interact with the phone and see notifications with the case closed. If you thought the S-View Cover for the S4 was handy, the combination of the Note 3’s newer software and the larger S-View Cover window offers even more functionality. Even if Samsung does upgrade the S4’s firmware adding the functions that were included with the Note 3, you’d still be limited to the smaller window. If you ask us, Samsung should create an updated and larger S-View cover for the S4 and of course add at least some those newer goodies we’ve seen on the Note 3. 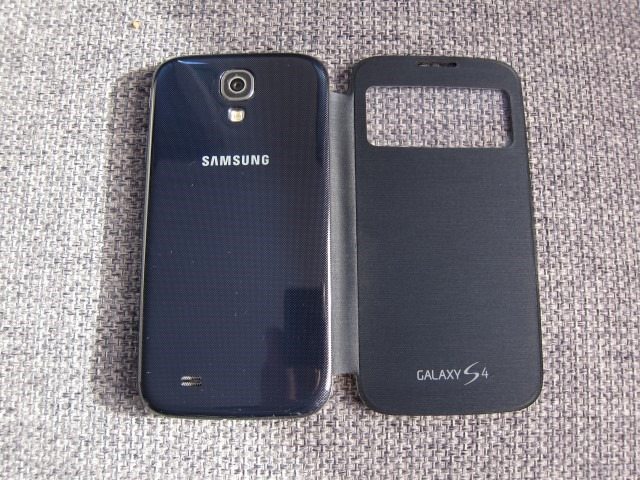 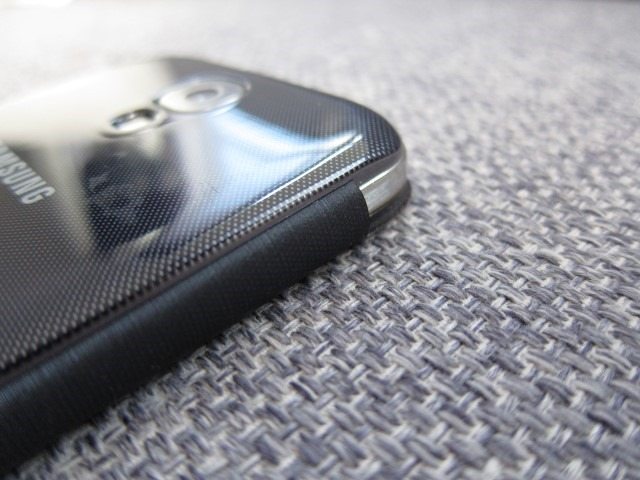 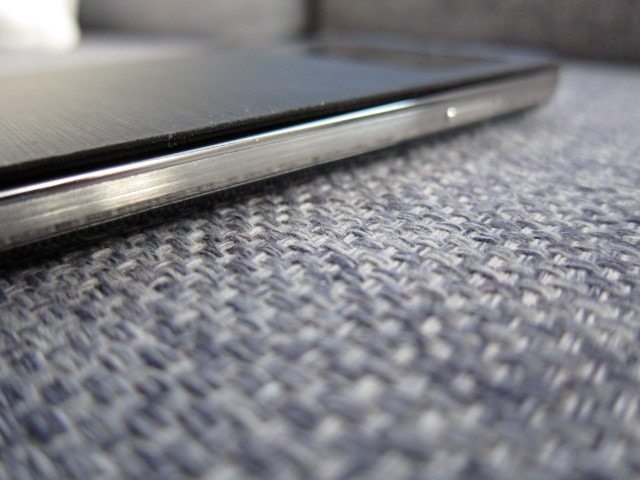 The cover is similar to the regular Flip Cover in the sense that it consists of two parts: a cover that protects the screen and an attached back cover that replaces the original plastic cover. Most people that aren’t familiar with this accessory are surprised to find that you actually need to replace the back cover with this one, instead of something that goes on top of the original back cover. This allows for a very thin, low-profile cover that looks elegant, is easily replaced and protects the screen. The S-View Cover’s rear part is identical to the original back cover, including the same shiny plastic finish and tiny dots. On the outside the front flap has thin fabric layer with a texture that has a scratched stone effect with some sparkly bits. It’s a very subtle effect that looks great and seems to continue the “inspired by nature” theme introduced with the S III. On the inside, the flap has a soft cloth lining that cleans the screen as it gently moves and rubs against the screen. Because the clear plastic window lacks this soft cloth lining, there’s always a small square part of the screen that always remains smudged. 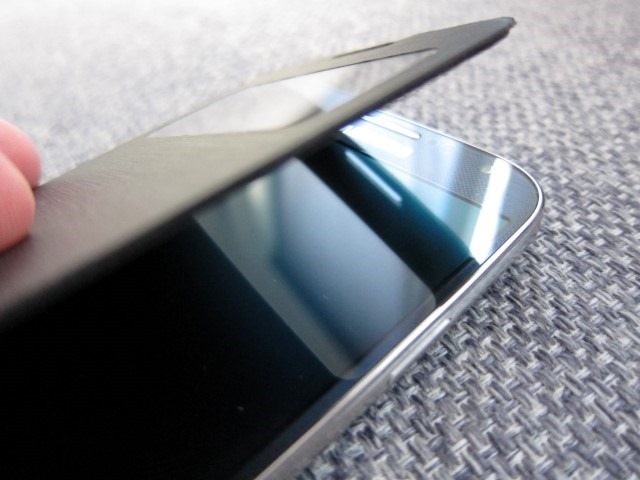 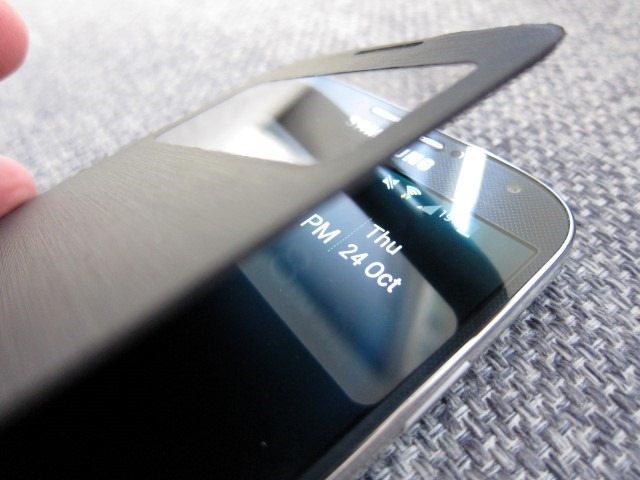 But how does it work? Basically the S4 has a Hall Sensor on the left side of the screen that can sense whether the cover is opened or closed and as a result it can turn a great part of the screen off and only display information in a small square the size of the clear plastic window. As result, you get information at a glance by pressing on the power button or when you’ve just closed the flap, while the rest of the screen is turned off, conserving power. The display will automatically and completely turn off after a while, based the screen time out you’ve set. Basically you get: signal and battery status, messages, missed calls, time/date and music player details. But what’s really cool is that you can accept/reject incoming calls and alarms with a single swipe without ever opening the cover. While the window does display useful information, the flap hides the S4’s handy notification light. As result I’m never actually notified of an event unless it’s a phone call, the alarm unless you have the vibrate or mute turned off. But if you’re like me, you’re phone is always on silent and the vibrating function turned off this can be an issue. If I get a Whatsapp message or an email for example I’m never notified, unless I actually press the power button to see the Whatsapp or email icon. This meant that I had to press the power button several times a day to activate the S-view window just to see if there was something new, instead of seeing a bright light that tells me there’s an event. Without the case I can easily see the notification light from afar, but this case basically disables a very handy and important feature. Samsung should have designed it with a small clear plastic window around the notification light allowing you to still see it. 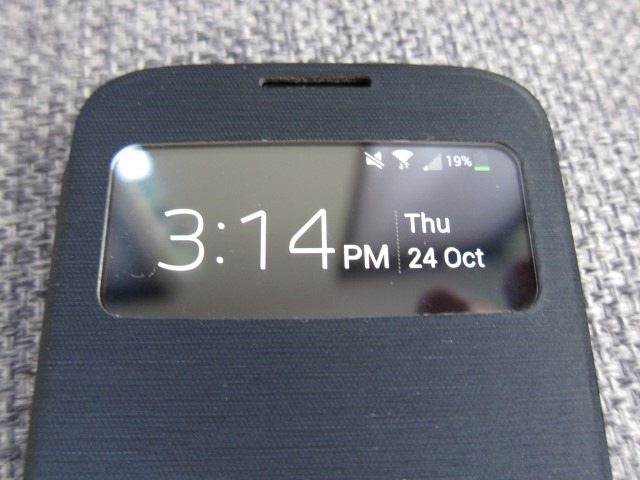 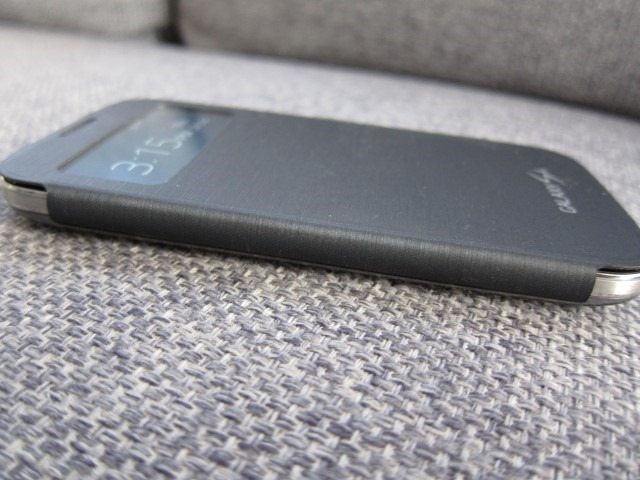 Feature wise, the current state of case and the software function enabled through the phone can be described as useful, but its full potential simply hasn’t been reached. For me at least, this would achieved if I could not only be notified of new email, SMS, Facebook messages and notifications, but also the ability to read these messages and emails. Hopefully Samsung will add these functions with a new software update. 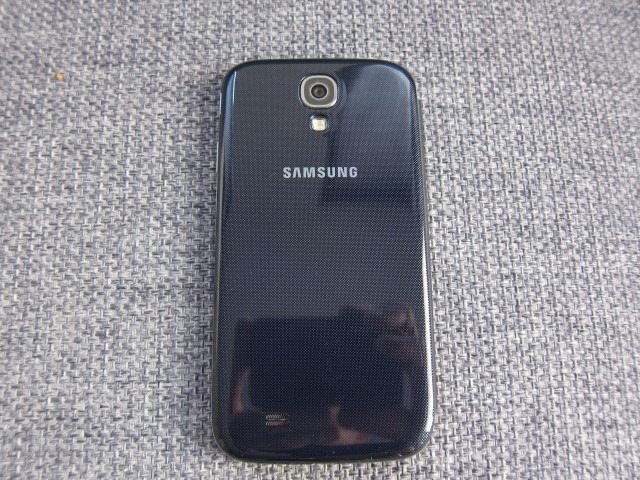 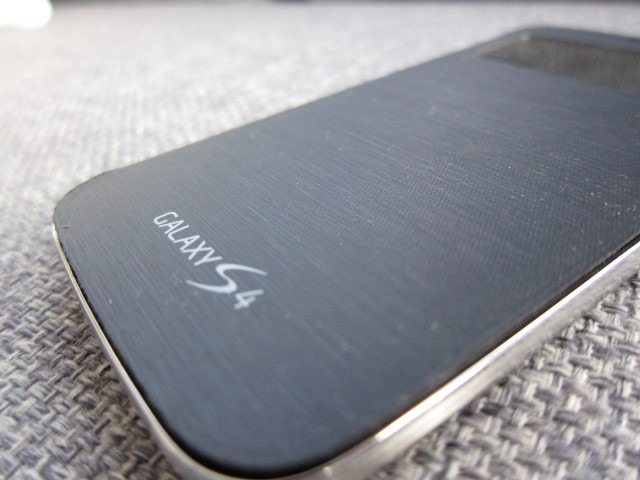 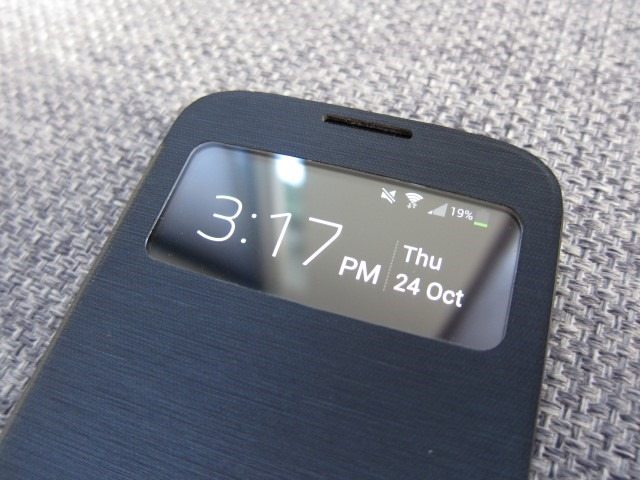 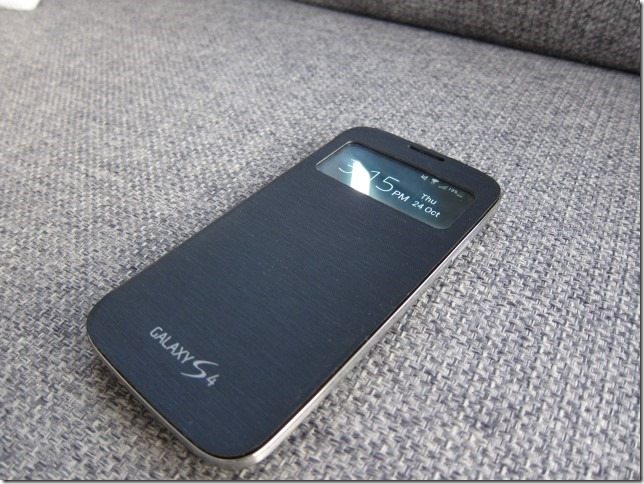 From a design point of view this case looks incredibly nice and elegant keeping the phone’s thin profile, making it one of the best looking cases I’ve ever seen. The clear window looks unique and I’m constantly getting question about it, with people complementing me on how nice it looks. But when comes to actually protecting the device it wouldn’t be my first choice. Simply put, it won’t protect the device from falls where it lands on its sides or dropping it from great heights. It is however effective at protecting the screen from scratches, but even in that case I would still use a screen protector. I once had a Note II with the standard Samsung Flip Cover where small particles got stuck between the screen and the flap, as a result I got fairly deep scratch. The same can be said for the S-View Flip Cover: while it will offer some protection a screen protector is still needed just to be 100% sure. If you’re prone to dropping your phone I would look somewhere else.

Would I recommend the S-View Flip Cover? Definitely! But I feel Samsung can still get more out of the case by adding more functionality through a software update. Just be aware that you will lose the functionality of the notification light and it won’t protect the device from heavy drops. It does however score big when it comes to style. It gets an 9 out of 10.

Shows useful info at a glance

The original back cover is removed and is always protected