With the release of the Tab Pro and Note Pro 12.2, Samsung basically wanted to bring the computer experience to Android tablets. Hardware-wise it had the size (12.2″), the speed (a fast Snapdragon 800 soc) and on the software side, the exceptional HANCOM Office. They didn’t stop there either, adding a proper mouse and full-size keyboard accessory. One key element to the desktop/laptop experience is ofcourse the USB ports and if you’re a bit old school, the LAN port. That’s exactly what Samsung’s USB LAN Hub ET-UP900 brings to the table, completing the PC experience on an Android tablet. 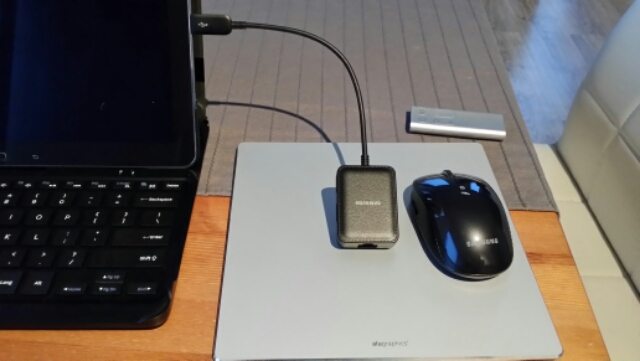 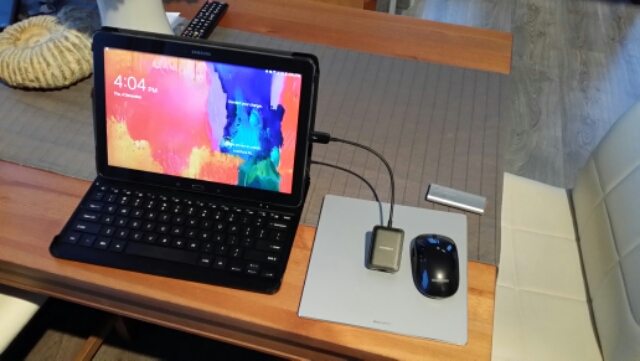 The ET-UP900 as the name suggests brings two full-size USB 2.0 ports ,1 LAN port and is compatible with both the NotePro and the TabPro. With prices varying between 30 to 60 dollars this acessory is on the expensive side, something we’ve come to expect from Sammy’s acccesories. The small black box has two USB ports on the right and on the front side the LAN port. The top side has as expected the Samsung logo and the now standard faux leather look complete with stitching, similar to what we’ve seen on the Note 3 and NotePro. Interestingly, the same design language carries over to the keyboard cover and the mouse, giving it all a nice uniform look. 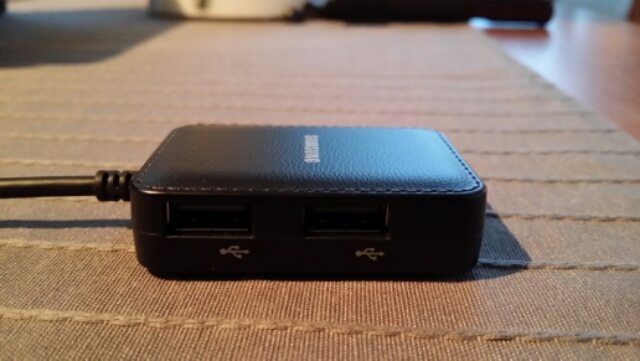 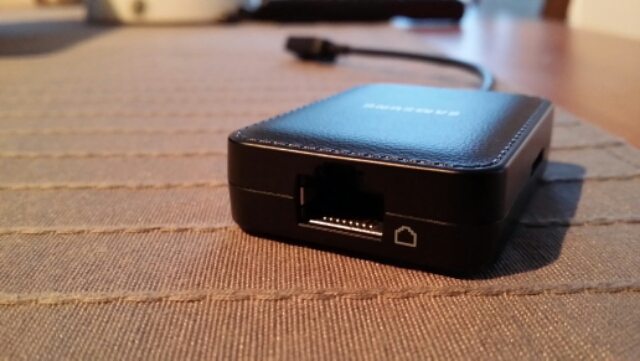 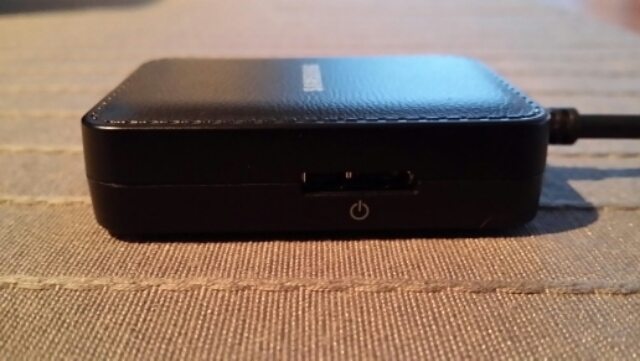 The hub has a 150mm cable (about 5.9 inches) that’s barely adequate. A longer cable or more heft would have helped putting the hub to rest flat on your desk, instead of just dangling on its side, which does take away from the experience and makes it look less professional. On the left side of the ET-UP900, Samsung also added the same wide USB 3.0 power port found on the Note 3 and NotePro. This can be used to charge your tablet or powering  high power USB devices such as hard drives. Strangely Samsung chose to use a standard USB connection for the the connection that goes to the tablet, perhaps a wise decisions as they seem to have aboned the wide USB 3.0 connection on newer devices such as the Note 4. 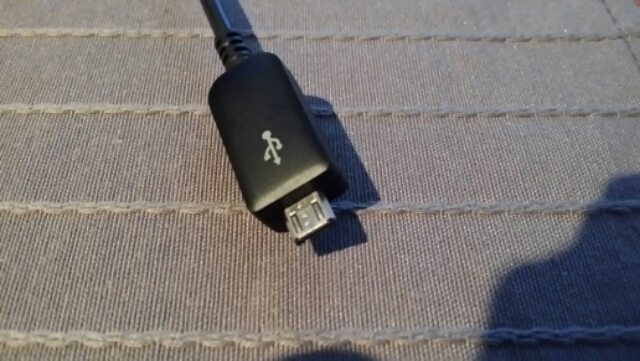 The hub worked flawlessly with both USB drives and thumb drives, providing adquate performance, even with two devices connected at the same time. I was even suprised that it recognized my 2TB harddrive, although connecting the power cable to the hub was necesary as these devices require more juice. I did notice that the hub became warm to the touch with heavy use, indicating that perhaps some processing is done inside the tiny hub. While USB on the PC is a “plug ‘n play” affair, this is not. You’ll need to first connect the devices to the hub and than connect the hub to the tablet. The same can be said for the LAN hub, which didn’t work until I activated it by going to Settings>Connections>More Networks>Ethernet, which isn’t a big deal, but far from the “plug and use” you’d find on a Windows computer. The option to turn it on is also hidden and if you don’t read the manual you’d think that it simply doesn’t work. The LAN isn’t something I would use everyday, even business users will probably be able to use a secure wireless connection, but if you travel a lot to hotels that only offer a wired connection (and there’s still a lot of those around  this can be handy.

Most users that get this accesorry will do so for the two USB ports. Sure it’s handy and definitly not the cheapest, but if you want the full desktop experience on your TabPro and NotePro, this item is a must-have. Just be aware that the experience is far from the typical plug and play you’d expect from a computer. It gets a 9 out of 10.

Pros
Enough juice to power  higher power USB harddrives
Can charge the tablet with accessory in place
Can handle two devices at the same time
Adds to the desktop experience
Handy for travelers that don’t have access to Wi-Fi in hotels.
Compact