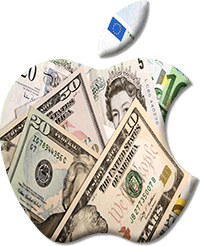 One point missed by many tech pundits is that Apple is only about making money now. Tim Cook is a bean-counter type CEO. Since his installation at Apple there hasn’t been a single industry-leading development. Innovation and taking chances aren’t happening anymore, sadly, at Apple. They haven’t happened for years now. Everything Apple currently makes is a response, or imitation, of it’s competitors. Apple has a fantastic brand and that’s all Tim is protecting and building on.

Google, with Android, is more about innovation and taking risks. It’s also about bringing life-changing technology to more people no matter where they are in the world. Google is involved with many efforts to bring not only phones to people but fast internet to corners of the world that have little to no internet. Google Fiber here in the US. Project Loon in Africa. Their support in SpaceX’s internet satellites. These are world-changing projects.

While Apple’s efforts benefit Apple greatly – the reality is that Google and Android benefit FAR more people. Samsung might be in a bad patch now, but that’s the down side of competition. Look at the successes elsewhere. Motorola, LG, Xiaomi, Blu Products, HTC, Oppo, Meizu, OnePlus, ZTE, Pantech, Huawei and too many more to list here. I’m not prepared to do the math (because I didn’t get into writing tech articles because I love math), but I suspect that the sum total profits of all Android phone manufacturers would put Apple’s bottom line to shame. And how many more people have personally profited individually from having Android in the world vs iOS? These companies all employ many more people than Apple does. The individual standard of living for each of those people working in those companies are increased because of Android.

Apple currently has a bare lead (51% of new phone activations in Christmas 2014 were Apple according to them) in the US but outside the US they are a luxury brand that fewer and fewer people are buying. Android has more then 80% of the world market. The long term prospects aren’t really that good for Apple unless they can return to leading the market in innovation and design.

But the innovations are all coming from Android based manufacturers. YodaPhone with it’s e-Ink display on the back. Blu Products and others with highly advanced state-of-the-art phones that sell for around $200. Samsung with it’s Note Edge showing sleek industrial design and technological advancement. That doesn’t even include all the tiny tech companies in India and China where people think up Android powered devices they sell to a hungry market. Many people don’t realize that the first smartwatches came from China and were based on feature phone OSes. When the hardware got better and cheaper they used Android. Over two years ago! The first tablet computers (other than Windows tablets) weren’t from Apple. They were from China and ran pirate versions of Android hacked to remove the phone features – over a year before Apple or Google officially supported tablets.

Apple is poised to release it’s first smartwatch in April 2015. I strongly expect it will sell well. However there is absolutely nothing in it that isn’t already provided in other smartwatches already on the market – except the Apple name. So it will succeed, but likely only in the US. Android Wear smartwatches, in the meantime, are already available from a handful of manufacturers and is in it’s third software release. Tech pundits largely feel that Apple already made major mistakes by not offering a round face, using overly complex interface controls in the software, and having poorly executed software for the health features.

This won’t be bad for Apple. It’s Apple Watch is expected to be one of the most expensive smartwatches yet. Due to the brand name it will sell widely to existing customers so it will be highly profitable for Apple regardless of the final quality. Which is apparently the sole focus of Apple now.