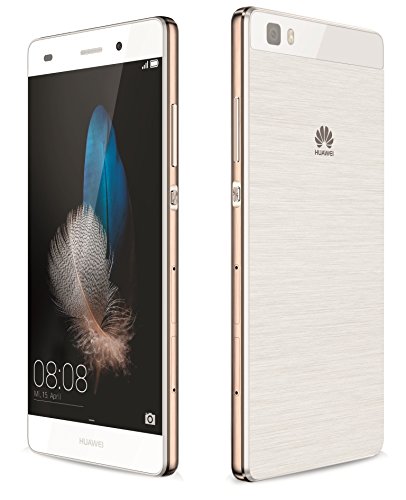 Decent Unlocked Android smartphone that punches above its weight. For just under $250, you get a smartphone not bound by a carrier contract.

Evident from its name, the Huawei P8 Lite is kind of a little brother to the P8. Naturally, being priced lower to the P8, it sacrifices a bit on the specs but at least you don’t have to sign a carrier contract to get it. Let’s take a closer look under the hood.

First and foremost, the moment you unpack the P8 Lite, you get the feeling that this is a light phone and you won’t be mistaken. Unlike its older sibling, the P8 Lite has plastic housing with a metal band so it sheds a lot of cumbersome weight. Thankfully, this does not detract from the overall look. It still feels like a high end phone though – which is unexpected.

It features a blocky form with buttons and ports that share the same placement as in the P8 proper but it does lose out on the beveled chrome edges and matte meta back. Thankfully, the power button has been moved a tad higher to a spot where it is easy to access when holding the phone in one hand orientation. The P8 Lite is thicker in girth and a tad smaller in overall size at around 7.62mm thickness but the 6 inch display sports 720p IPS, which considering its price tag is surprisingly clear. It is protected by a Gorilla Glass 3 screen but also the phone ships with a screen protector so you don’t have to buy it afterwards. Bonus!

The entire package is powered by a 64 Bit Qualcomm Snapdragon 615 processing, 2GB of RAM and on-board storage of 16GB. Additional storage is possible via the microSD card slot but it is limited to only 32GB of extra storage. However, in testing, we were surprised when it handled a 64GB card just fine. Specs wise, the P8 Lite is comparable to many higher priced brands.

As per the specifications, this Huawei release boasts a 13 megapixel sensor on the rear side while a 5MP shooter adorns the front. Of late, Huawei has focused mostly on improving their camera quality and this is evident in the P8 Lite’s impressive shots. Double pressing the volume button launches the camera app and allows you to take a picture in under 2 seconds!

Getting used to the packaged camera software for someone who has never held a Huawei handset previously will involve a bit of a learning curve. Overall though, it is a good software with options for Panorama, HDR, best photo, all focus, watermarks, audio note and general settings. A button lets you quickly shift to the front camera while a droplet button gives you live filters. You also get Beauty mode for selfies and a video mode.

Bottom line, the camera software is packed with latest features and will serve you well but don’t get your hopes high on the final image quality. Nevertheless, considering the small price you pay for this beauty, it does average in the camera department. We felt, low lighting was a problem for the camera unit but day time pictures were at par with other major brands.

Unfortunately, Huawei is too slow in its upgrades in the software department. The P8 Lite for instance ships with 4.4.4 KitKat on top of which runs the custom Huawei EMUI or Emotion UI. You only get the 3.0 version of EMUI not Huawei’s latest release. App icons are all rounded off with all apps on your home screen and no app drawer. The pull down screen is split between notifications and settings shortcuts while the settings are once more split into General and All sections.

If only the software was more fine-tuned or improved over its predecessors, this Huawei would have trumped even its elder sibling. However as things stand, if you don’t mind learning your way through the UI then it has got all the features you would expect in a smartphone from a carrier except it retails for a lot less and is carrier free. A good camera, decent performance, good styling and the option of finance straight from Huawei definitely makes it a good choice.