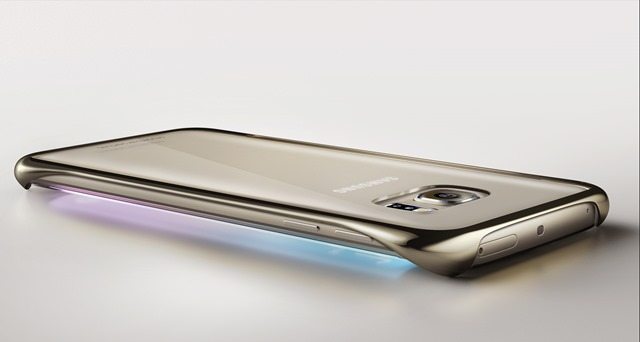 When it comes to official cases, Samsung has many options for the Galaxy S6 Edge. But in the end it all comes down to the fact that those gorgeous edges should be shown and not covered by a case. The official flip cases for example just seem to get in the way, are quite expensive and don’t really offer that much extra protection, except for scratches. Basically they’re stylish, offering basic protection against scratching, no drop protection here either. Of all the cases I’ve tried for the S6 Edge, I always keep coming back to the official Clear Cover Case. If you’d have to get one case for the S6 Edge, this should be it. There’s just one catch. 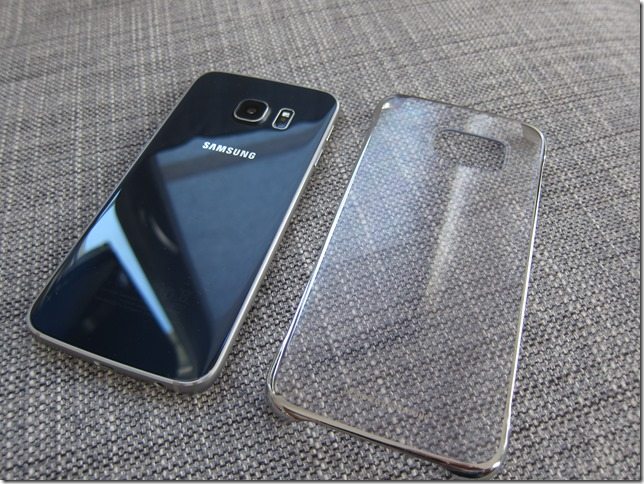 The official Clear Cover Case comes in 5 different accent colors, but as the name suggests, it still first and foremost a clear case. As a result, the main part is clear and it’s only the edges that have different colors. Speaking of the colors, it comes in Silver, Blue, Gold and Green, basically the colors of the S6, except for the Silver obviously. Both the Blue and Green variants simply aren’t done in the right matching shade, which is why they don’t do justice to the Dark Blue and especially Emerald Green S6 Edge. The gold case is undoubtedly the right match for the gold S6, but it’s the silver model that goes well with all the S6 colors. 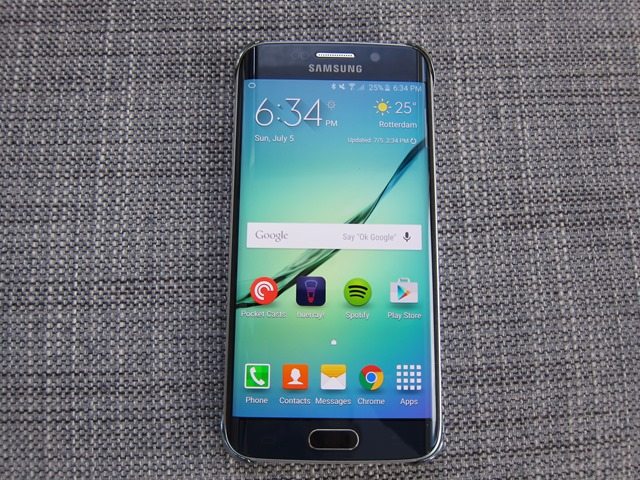 On my Dark Blue S6 Edge for example, the silver variant looks perfect. All color variants of the S6 have this metal edge that goes really well with the case, completely blending with the design of the phone. The effect is so perfect that almost looks like the case disappears. In fact I’ve had people ask me why I don’t use a case! 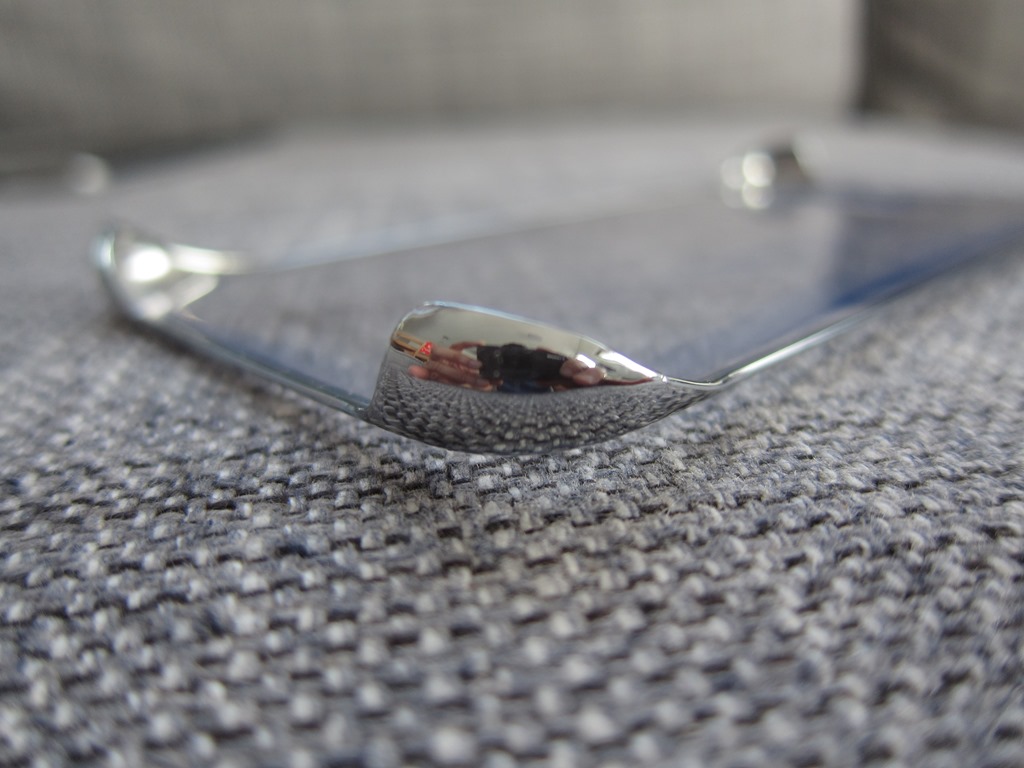 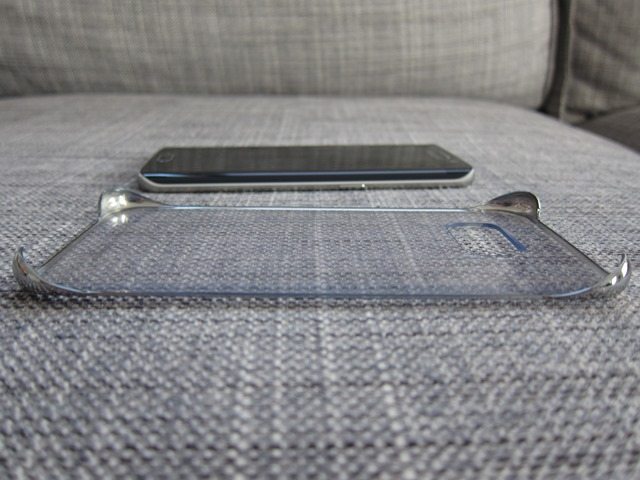 Perhaps the most important feature of this case is that covers the four corners of the device. If you’ve ever dropped  a phone before, you’ll know that if it doesn’t fall flat on the screen, many times it will land on one of these four corners. These raised edge are so subtly and tastefully done that it completely integrates with the design of the phone and almost looking like it should be part of the design, all while protecting these four vulnerable corners. 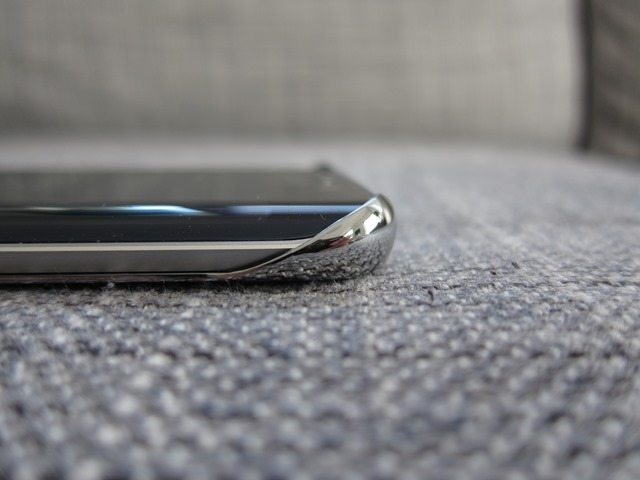 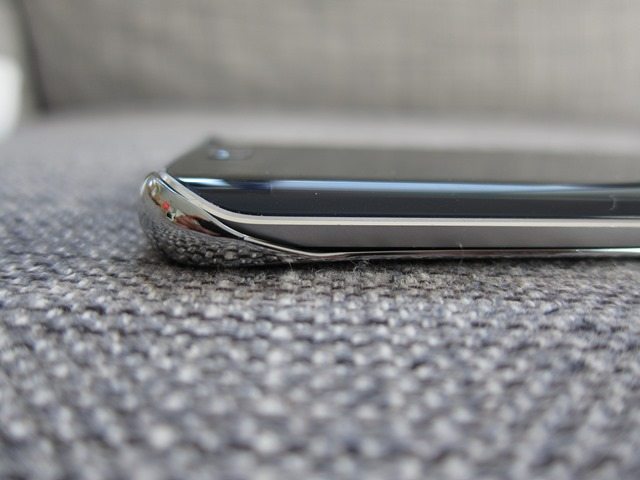 These silvery parts and the case in general enhances the S6’s design. Many cases just end up covering the phone or change the design in way that you’re end up with something so much different than what you originally bought. At least visually. I got so accustomed to how the case looked on the S6, that the a few days later when I saw someone with an S6 Edge, I immediately that something was missing. It simply didn’t look “right” or as least not as good. 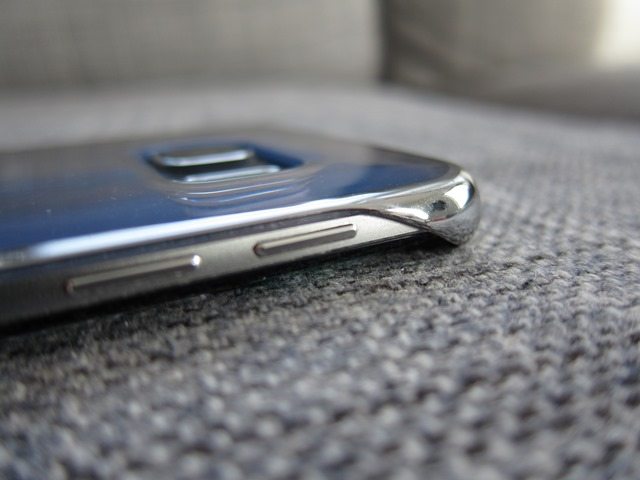 The S6 edge also has these very sharp metal sides that offer little in the form of grip and are uncomfortable when holding it for long periods of time. The case greatly enhances the balance and grip in a way that the phone simply doesn’t feel right without it. Those extra millimeters that are added to the metal edges make a lot of difference. 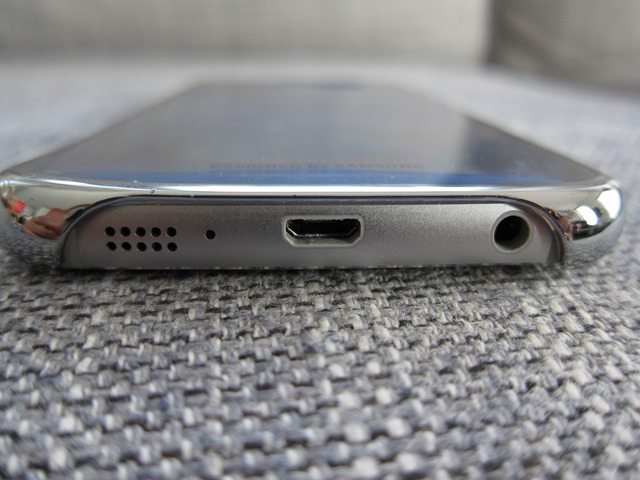 Another notable feature of this case is its ultra slim profile. Around these raised corners, the case leaves all sides exposed, leaving the metal parts vulnerable to scratches. It would have been nice if the metal edges of the phone were also covered by the case, but that would also get in the way of a smooth interaction with the phone’s edges. It’s not ideal, but it’s a good compromise. My S6 Edge has yet to show scratches on these exposed metal part, which is why the designers made the right decision. 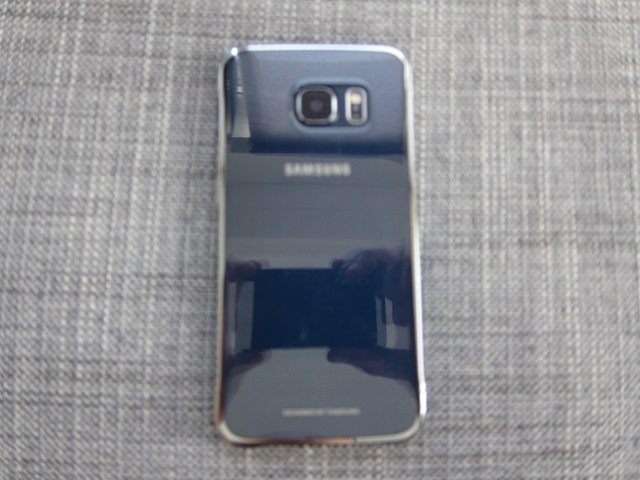 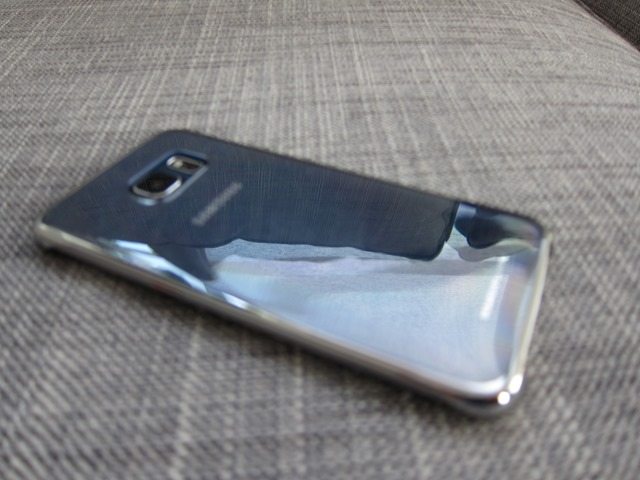 The back is clear, showing the color of the phone, continuing the trend of being as inconspicuous and subtle as possible. The finish glossy but you only notice it in certain light conditions, luckily it also doesn’t show fingerprints easily.  However, the biggest down side to this case is how easily the clear back can and will scratch. While the material is beautiful and feels great in the hand, scratches started showing up within the first two days. 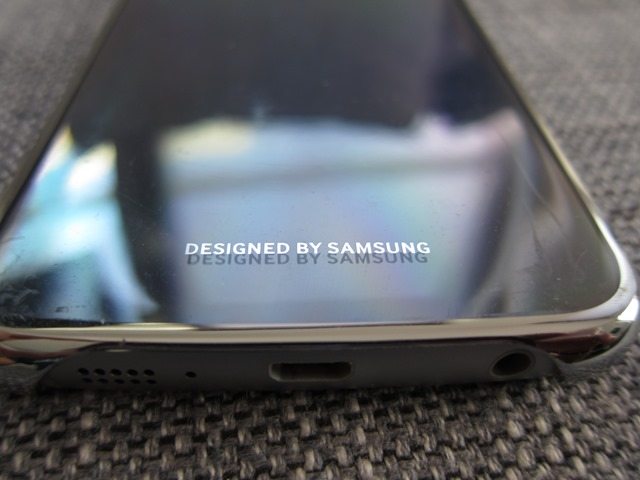 This is was even stranger considering the fact as to how much I baby my phones. But due to the case being clear, these scratches aren’t easily visible. Even so, Samsung should have gone with a material that less prone to scratches. What were they thinking? On the other hand, the case does seem to do its job well, protecting the beautiful glass back from scratches. 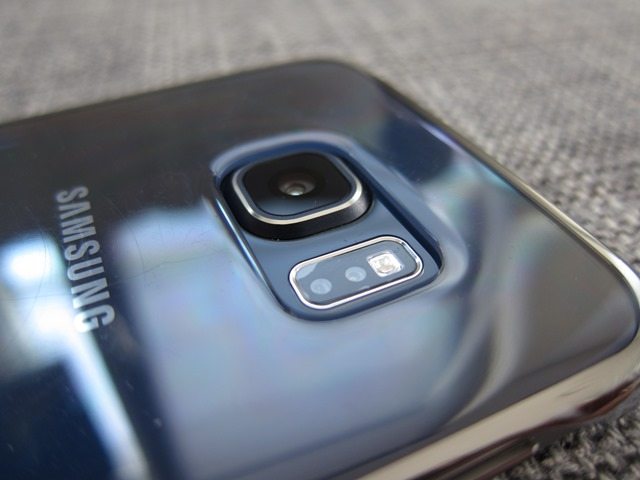 Usually Samsung cases tend to be raised, leaving the camera module sitting slightly recessed behind it. That’s not the case with the Clear Cover case as the exposed camera lens still remains, well exposed. 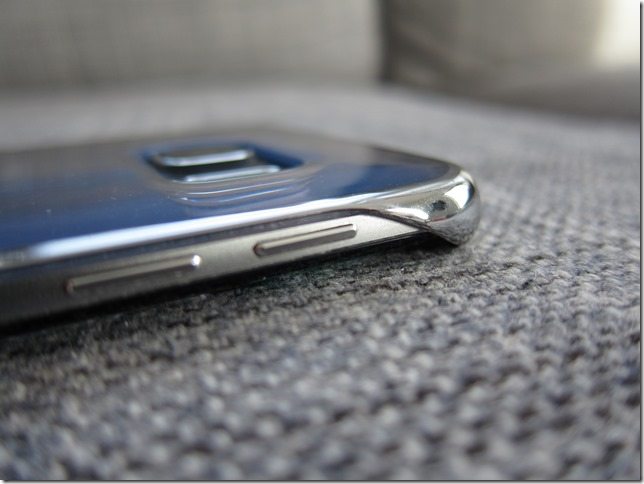 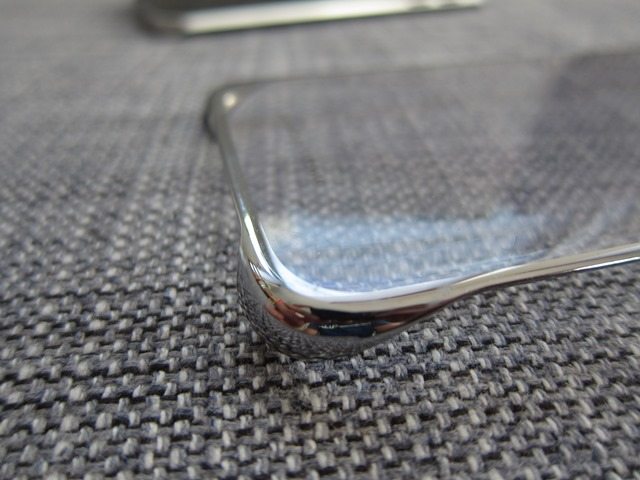 One unexpected design feature are those corners we talked about earlier. They curve towards the screen and slightly stick out. The result is these tiny protrusions that slightly raise the screen from any flat surface when the phone is turned upside down, again protecting the screen from scratches. If the phone also happen to fall on its screen, these protrusions will take the brunt of the fall, all while the screen itself sits slightly elevated. Which brings us to the next point. Unlike a flip case, this case won’t offer much screen protection except for those small overhangs. The S6 has been known to have a screen that scratches very easily. The catch with this case is that a screen protector is a must. 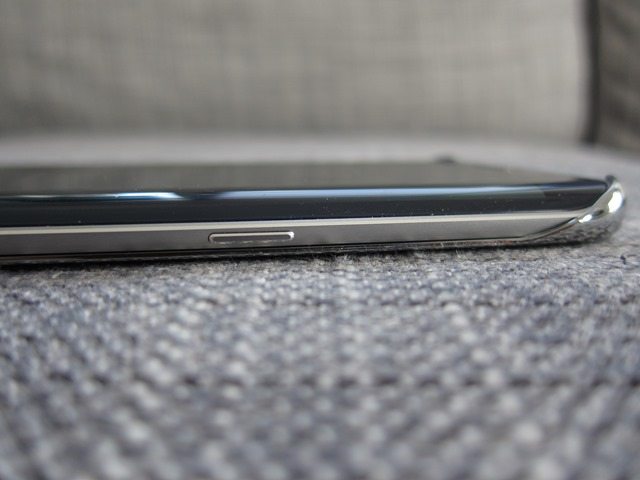 If you have to get one case for the S6 Edge, this should be it. But just don’t forget a screen protector.  It gets an almost perfect 9.9 out of 10.

Protects the back, four corners and slightly raises the screen

Looks great and adds to the S6’s design

Improves grip and makes the phone more comfortable to hold

One a few cases that actually enhances the design of the phone.

A Screen protector is recommended