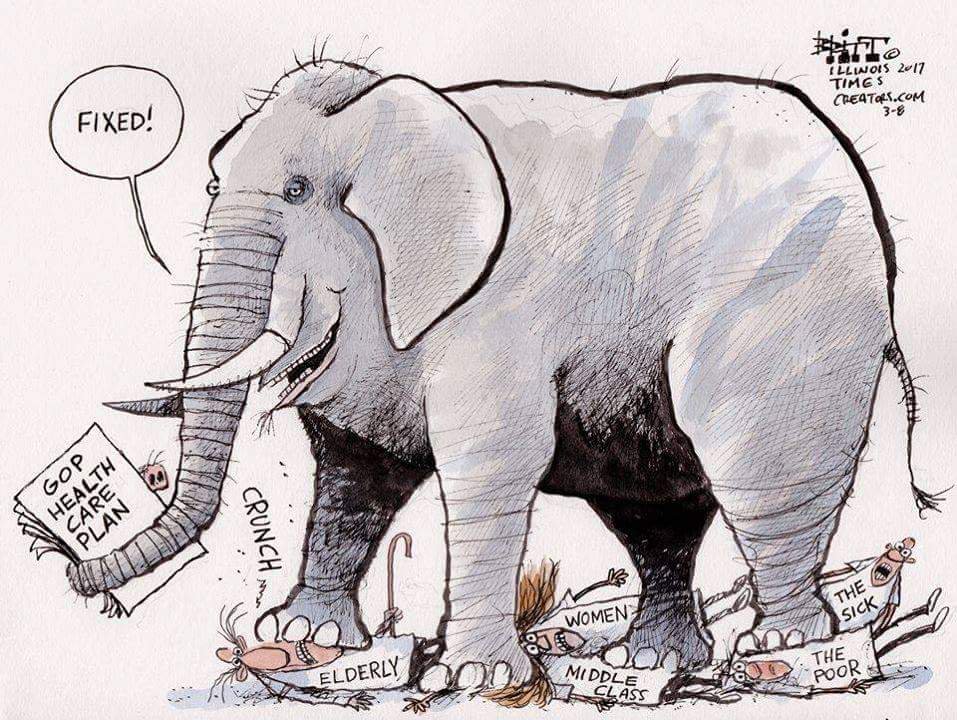 Back in 1949 Chuck Jones directed this animated documentary called “So Much for So Little”. It won an Academy Award in 1950 for Documentary Short Subject.

Imagine THAT!!!
Today, we have idiot politicians like Idaho Rep. Raul Labrador at the LCSC Town Hall – (May 5, 2017) that make moronic comments like,  “Nobody dies because they don’t have access to health care.”

And  – the audience explodes with anger.

I guess Labrador never met anyone who died because they couldn’t afford to go to a doctor and is now DEAD. Well, I have and most people who are living in reality probably do also. We must all know someone with a chronic illness who would be dead without medication and regular visits to a health clinic or doctor

We certainly know some people who might be dead if they didn’t have the opportunity to have an operation. Labrador must be living under a flower pot because he sure has no idea what he’s talking about.
In an Article from 2014 It was reported that “The death rate in Massachusetts dropped significantly after it adopted mandatory health care coverage in 2006”. They calculated that “A national 3 percent decline in mortality among adults under 65 would mean about 17,000 fewer deaths a year.”

Wow. I seriously doubt rich people like Labrador, Ryan and the rest of the idiots in Congress have a single clue what it’s like to be poor. The constant stress, the worry. Juggling what little money you have between food and rent. Going to a doctor is a luxury you can’t even waste time thinking about. Imagine feeling guilty because you would LIKE to buy a magazine or book but don’t think you should spend the money…. I seriously doubt Ryan has EVER had a thought like that inside his very empty and callus head.

Except that in other countries they CAN take the time to think about it. The UK got their Universal Health care around 1948. Australia got it’s Health Care system sometime in the mid 1970’s. Shockingly enough there appears to be LOTS of countries with some form of Universal HealthCare.

I have family and friends living in Europe and they seem reasonably happy with what they have. One friend hurt himself playing some soccer and WITHOUT a THOUGHT just walked into the hospital to get a bit of help. Imagine not having to worry about getting a huge bill you can’t afford? One cousin just had a baby (and it wasn’t easy, either). Her mother has diabetes… They don’t stress over things like that. They can depend on their health care.

When the Affordable Care Act was signed into law we were on our way to Single Payer or something getting close to that. My brother and many other lives were saved because of the ACA. It’s not perfect, but it’s a step in the right direction. Now we have morons who just want to pander to insurance companies and have not one single problem killing people.

Health care should NEVER be a For Profit activity. Like the Government, it should be For the People.

The AARP rips this monstrosity to pieces because it’s inhumane. It’s nothing but a tax break for the rich and a death sentence for the poor. It’s past time to fight back.

I compiled a list of the house members who voted YES on AHCA and whether or not they have upcoming town halls: https://t.co/9jd9unT251

This is a list of the house members who voted YES on AHCA and whether or not they have upcoming town halls. Get yourself there and voice you opposition to their threat to YOUR life.

There’s also a petition to Remove health-care subsidies for Members of Congress and their families. This is what they deserve. Why should WE pay for their health care when they are denying it for the rest of us. They aren’t special.

They are getting the healthcare they are denying everyone else.

They are in bed with insurance companies and think YOUR health should be a matter of profit and not human decency.