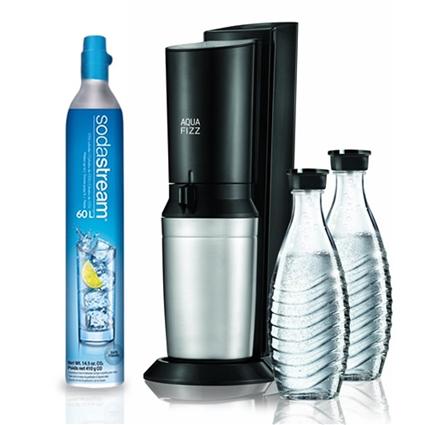 The SodaStream that’s an upgrade!

The SodaStream Aqua Fizz is a new model offered by SodaStream, the company that puts the process of carbonating water into the hands of the home

user. The Aqua Fizz, their latest model, is both a technical and stylized upgrade over previous models. Upon receiving the new SodaStream Aqua Fizz for review, I was caught scratching my head. I mean this thing is something that we’ve had a few models of before. Heck, we even used one of the older models on the day the new Aqua Fizz arrived. How was another model going to be much different? There wasn’t anything really wrong with the prior versions, to begin with. Then, I unboxed the Aqua Fizz and was pleasantly surprised that it had glass soda bottles. I thought to myself, “hey, this is kind of different.” My wife, however… Well, her eyes lit up like a kid on Christmas morning. This was not her normal reaction to a review product. With that, I knew that this SodaStream model was something extraordinarily different than before. The oddly shaped glass carafes, the slick new aluminum encasement, and all the expected benefits of a SodaStream make this a solid improvement over the earlier models. 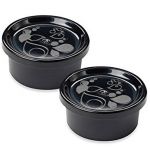 As I mentioned in the opening, the bottles are made of glass. This is a step up, but the use of glass implies several other changes. The first being that the “marker line” for the water is molded rather than painted into place, which is important since, outside of breaking, a glass bottle will far outlast the original plastic bottle. The glass bottle is a bit more of an “I Dream of Jeannie” shape with a long neck and a larger base. This seemingly small change means fewer spills when adding syrup to the carbonated water. The bottle cap has a shape with large grooves on it that allows for a better grip on the top for both closing and opening the bottle. The top is still made of plastic, with a rubber seal inside. For those of us with an existing SodaStream unit, I just spent an entire paragraph about the improvements of a bottle. A BOTTLE!

That was not the biggest change, although our Earth-Saving contingent should already be happy as a lark. No. Look at the picture. Your eyes are not lying to you, there is an aluminum encasement where the bottle is placed. This is not just for aesthetics, oh no. Not even a little bit. This is what finally got my excitement up about the upgrade. This is why I started calling it a SodaStream 2.0 in my house. That aluminum container not only locks the bottle into place, seals the bottle, and prevents messes — it adds something that was missing from every previous iteration of the SodaStream. Silence. You read correctly, silence. It is shockingly quiet to anyone who’s used an older model at all–let alone owned one. There are a heap of reasons I like the SodaStream in general, but, until now, my ears did not agree with me. In fact, the noise of the older models of the SodaStream was so bad we had household rules limiting the times it could be used! Not anymore. The SodaStream Aqua Fizz delivers more than just a nicer look, it is an honest to goodness step up. If you use a SodaStream regularly already, I suggest considering this upgrade. Noise reduction is always a valuable quality of life improvement.

Now, for those of you who have never tried a SodaStream, but still drink soda, sparkling water, or other carbonated refreshments — I’ll let you in on the skinny. The SodaStream, even the other models, are all about a pretty simple idea… Make your own soda, and leave all those cans at the store. That’s it. It sounds really simple, and it is. The problem was, nobody wanted to field that strategy against the likes of Coca-Cola or Pepsi Co. The secret is that the SodaStream system uses a smaller canister of CO2. No really, that’s about it. It’s just one of those things that seem obvious NOW, but nobody before really got traction in getting it to work on a mass-market scale. There are also a few fan-sites out there with ideas, instructions, and general help for SodaStream owners. The product line, including the low-end models, are all fairly well built and easily survives in most households.

Overall, having a SodaStream is not a bad investment, and not all models are as pricey as the SodaStream Aqua Fizz. However, the extra price for the Aqua Fizz unit is well worth it. The glass carafe adds a touch of refinement to the SodaStream, the reduced noise is a great improvement, and it still has all the things that make a SodaStream great. It’s quieter, it looks nicer, and is more rugged than the other models. Look, my wife thumbs her nose at nearly every review item comes to the house (granted, her interests do not include android anything), and she was in love with this thing immediately. The SodaStream Aqua Fizz is an absolute upgrade to an already great product.

Still here? Okay, there are a couple of other things that deserve to be mentioned. Just a couple of notes about being Earth-Friendly and the only real drawback of this model.

You’ll need CO2, and SodaStream has their own proprietary canisters of CO2. (Yes, I know about the lifehackers concerning this topic.) You’ll also need syrup, and SodaStream has their own bottles of that as well. (Shush, lifehackers, I know, I know.) Keep in mind that the canisters are refillable, and at a discount at most brick-and-mortar retailers. From the environmental side of things, there is a lot less waste going to the landfills from households with a SodaStream as opposed to those that do not (but still drink soft drinks). For those that aren’t as eco-concerned as their neighbors, a benefit is still involved… Less crap to carry in after a trip to the grocery store. Finally, a household can have many flavors of soda, or flavored water, available without taking up all of the fridge-estate either.

The Aqua Fizz model really only has one drawback, and that applies only to first time users. This starter kit does not come with the usual selection of test syrups; although, it does come with a fresh bottle of CO2. If you’re not already using a SodaStream, you should consider picking up a bottle or two of syrup or water-flavoring. By not including the flavoring samples, one can only conclude that this model was intended for existing SodaStream owners. Still, this is only a small drawback for a fantastic upgrade.