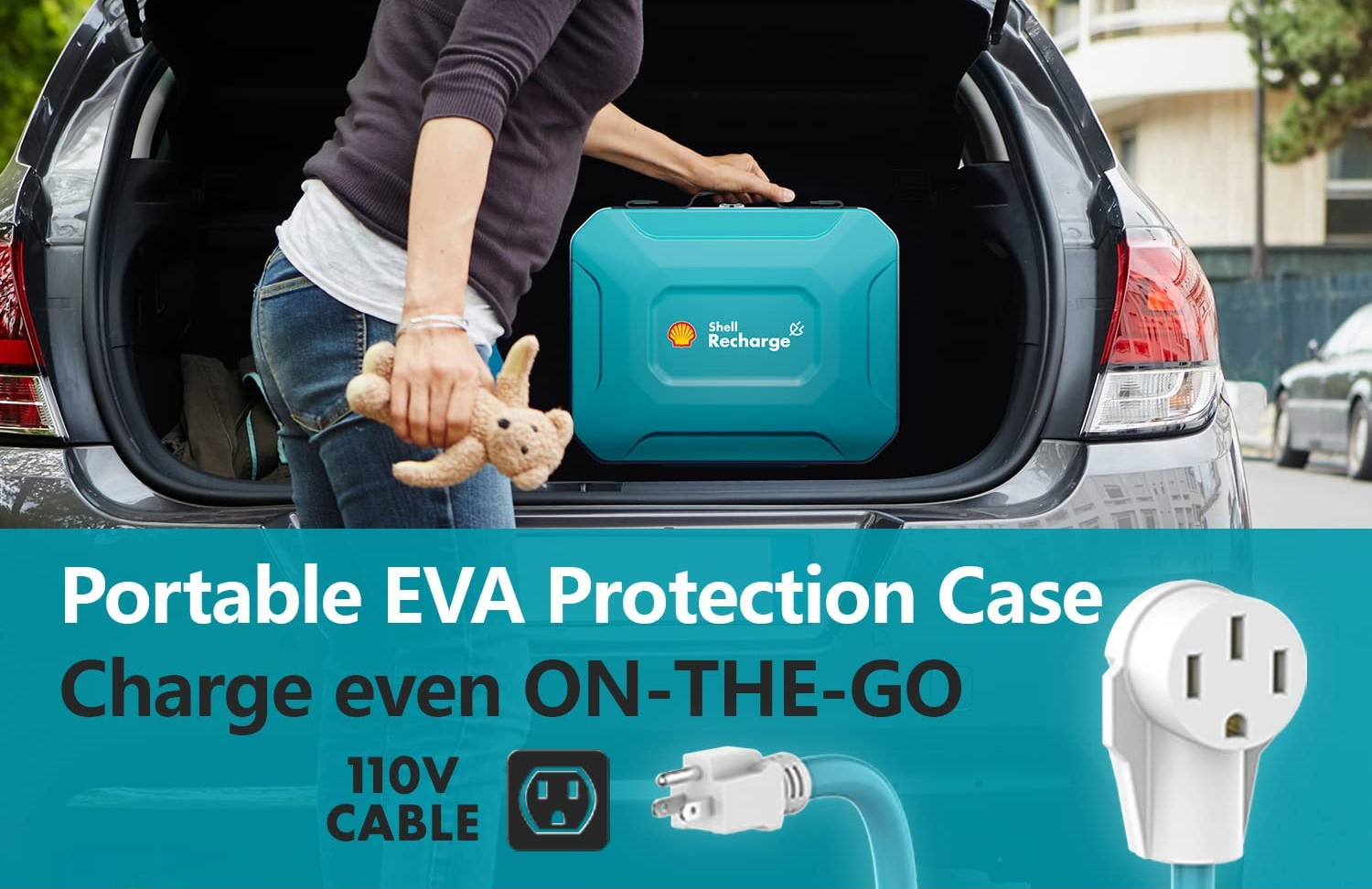 Shell EV Charge Home and Away

Seriously, who would have thought of Shell when shopping for an EV charger? Yes, that Shell—the oil giant company with gas stations all over the United States. Surprisingly, however, they’re slowly guiding their business toward what most of us think of as the future of electricity.

Shell makes both a 32-amp and a 40-amp version of their charging station. Since the Home Charge Station is priced competitively for what it can do, we decided to put it through its paces and see how it stacks up against other EV home chargers on the market. While it is listed as an “EV Home Charging Station,” what sets it apart is that it is portable.

Because this is a portable charger, there is no need to install the Shell Home Charge Sation. If you want to install it, a keyhole opens on the back of the gadget, which is preferable to letting it hang by the plug.

Both unit versions are dual-voltage and come with a NEMA 14-50 socket and a NEMA 5-15 converter to allow 120v Level 1 charging from a standard domestic outlet. It does not come with a connection holster or cable management system, so you’ll need to look into a third-party solution. While this is a little bit of a drawback, cable management systems and holsters are readily available on Amazon and other stores.

The Shell Home Charge Station can deliver up to 7.7 kW in 32-amp mode and 9.6 kW in 40-amp mode. Shell states that at full power, you may add up to 40 miles of range per hour of charging, depending on the efficiency of your EV.

However, we had some difficulty attempting to use an authentic J1772 to Tesla adapter with the Home Charge Sation—locking into place. Instead, we had to use a third-party Lectron Tesla adaptor, which was somewhat thinner and managed to slide on and lock into place. We did find one EV that had real issues with Home Charge Sation, the Wrangler 4XE; the device is just incompatible with the Jeep Wrangler. This is surprising since the concept of portability would be a big selling point for a Jeep owner.

A strange thing about the Home Charge Station is that it doesn’t have any audible sound when the connector is correctly attached to a vehicle charging port or an adapter. The device was set to charge at 16 amps by default on Level 1 charging, which is too much. It quickly went down to 12 amps, so the product’s S-PROTECT does it’s job. Still, it can be a little concerning to see such a high amperage reporting initially.

It’s worth noting that the company claims their cable is 30 feet long, although it isn’t, at least not according to the same criteria as other providers. Other manufacturers take the charging wire from the charger’s base to the J1772 connector, but Shell takes it from the NEMA 14-50 plug. The Home Charge Station’s cord is 25.5 feet long when measured from the charger’s base.

This time, we ran four tests to evaluate how the Shell Home Charge Station would fare in standard real-world settings so that you could compare it to other chargers on the market. Our results were a little bit of a mixed bag, but overall satisfactory for the price point of the unit.

We dropped the Shell Home Charge Station from around five feet in the air to the ground five times to see how it would react to falling during regular use. After that, the machine powered up without a hitch, and despite our rough handling, it seemed to weather the beating.

We usually provide the cables and connectors of the units we evaluate. When we performed the extreme pull test on the NEMA 14-50 cable, we were successful in getting the outer jacket to came off. The pull test was using excessive force which eventually exposed the wires, but the conclusion is that repetitive use should not be an issue.

The Shell Home Charge Sation has an IP 66 waterproof rating, equivalent to a NEMA 4 rating. That means it can be installed outside and has extra protection against heavy rain or snow. We spray the casing down from all angles in our extreme weather test. After cleaning and plugging in the item, the Home Charge Sation powered on and began charging without a hitch.

The Deep Freeze Test for Cables

We placed the Shell EV Charge Station in a commercial ice cream freezer for 13 hours to see how the charging cable would react to extreme cold. When we took the EV Charge Station back out of the freezer, the temperature was -9.6° F (-23° C), and we were disappointed to learn that the cable was so stiff that it was difficult to use. Thus, we find that It is not suitable for use in colder outdoor climates.

Shell also offers smart charging features like a schedule timer and adjustable current mode that allow you to be more cost-effective with your charging, or just charge for as long as possible to maximize battery life. You can also set a timer to only charge when electricity is cheapest—that way, you can also work around a budget.

The display screen on the EV Charge Station is really nice for a charger at this price; a feature not commonly found on budget friendly charging units. It displays temperature of the system, line voltage, the amount of time on charge, current power usage, and total KWh used. This is something previously only found on the more expensive units.

The Shell EV Charge Station is portable, so you can bring it along on your travels and use it anywhere there’s an electrical socket (whether that be at home or while traveling). The protective case that comes with this charger is waterproof and dustproof so it’s ready for any weather!

Overall, Shell EV Charge Station is a good device that performs well, with the purchase of a few accessories. Except for Jeep Wrangler 4XE owners, this is a recommended buy. Although we have linked the item a few times in this article, we have been really impressed with the price/usefulness of this product, and will once again provide a link to the Amazon Page. 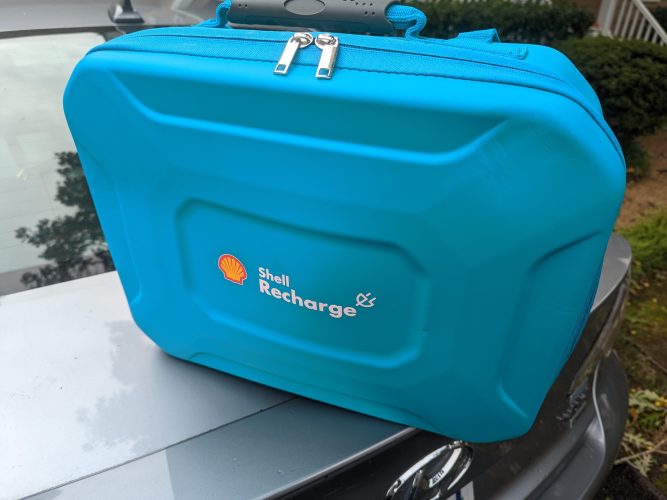