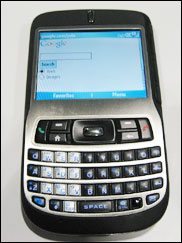 T-Mobile Dash is getting close to release

The HTC S620, an exciting new alternative to the Treo 700 line and Blackberry phones, will be sold as the T-Mobile Dash in the U.S. This is a Smartphone that is getting a lot of press and is creating a lot of buzz. Read on for more specs and pictures. The Dash looks different than many Smartphones. The case looks to be made from a rubbery sort of material.

Pricing is not yet knows, but the median guess seems to be near the $300 price point. That puts the ‘Dash’ in the competitive category of the Treo line and the Motorola Q.

Of course it’s the form factor that jumps out. The S620/Dash is supposed to be smaller than the Motorola Q and will dwarf the Treo line.

The keyboard looks to be very impressive. HTC has gone with square keys which look harder to press than the taller oval shaped keys the Q uses. Those who have done hands on reviews, however, seem to like the feel.

HTC has built in some unique logic that which eliminates the need to push the ‘shift’ or ‘alt’ kind of button. On this model, when you hold down a letter key, you’ll get the alternate option.

The Dash will be billed as a business device, even though T-Mobile is a consumer-oriented carrier. The Dash should make for an interesting competition in the highly competitive Smartphone market. The Dash should be available in mid October.