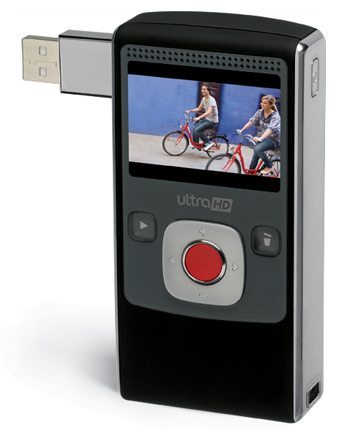 Not too long ago we reviewed Flip’s MiniHD video recorder. Recently Flip released a new version of their Ultra line and now include HD video recording with it as well.

In this new market is there a reason to choose one of these top performers over the other? If you owned or used a Flip Ultra then the UltraHD is a clear upgrade for you. Better video, better white balance, all around better.

If you’re comparing the UltraHD to Flip’s own MinoHD the differences are less clear. In fact we simply wonder why Flip put out two devices that are so similar and yet have a fairly similar price point?

I’ll let you know right now, I don’t know the answer. However I do know that both cameras are excellent.

The biggest differences are that the UltraHD offers a slightly larger field of view in it’s lens and the UltraHD also uses standard and replaceable batteries. You can also customize the case with different colored faceplates for all that matters. It’s also a bit larger all around when compared to the MinoHD.

There are differences in the white balances and exposure but all I can tell you is that unless I’m looking at footage from both I don’t really notice these differences.

Flip really started this revolution in flash-based video recording and they’ve remained one of the strongest players. The reason is that they’ve kept everything enormously simple and easy. One button turns it one, another button records and another button plays. What else do you need? I know from personal experience that I could do more, but my family doesn’t seem to miss any of the advanced controls from my older video cameras. Plus they love how easy it is (in Windows Vista at least) to make a DVD from this footage. Several class projects have gotten my kids VERY good grades.

You won’t make any mistake in buying a Flip UltraHD and if you choose the MinoHD – you didn’t make a mistake there either. I think that’s the best thing I can tell you about their cameras.