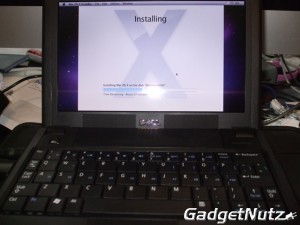 Several months ago, I took a shot at building a Hackintosh out of a Dell Mini 9 netbook.

One of the biggest problems I ran into was the choice of the wrong SSD card (Crucial) and an excessive boot time, which lead to the whole thing being rather slow and IMHO, unusable for anything except the occasional browsing and/or e-mail on the run.

While these are the very things you’d think about using a netbook for, when I had the opportunity, I picked up a second-hand Macbook Pro and found the Mini 9 a good home with a good friend.

About a month ago now with the help of a good friend, I ran across a great opportunity to pick up the “business” version of the Mini 9 in refurbed form, the “Dell Vostro A90“. The A90 is identical to the Mini 9, save that it’s all black, and seems to feel a little more sturdily built. The model I got came with a gigabyte of RAM and an 8 Gigabyte STEC Solid State Disk (SSD) card.

UPDATE: As of the time of this writing, it looks like Dell might have actually discontinued the A90, as it’s not on their web site, but you can still pick them up in their Outlet store at http://delloutlet.com. I can’t confirm whether or not they’re discontinued, but if not, they sure do make them hard to find on the Dell web site. 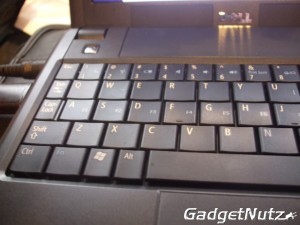 What I quickly found out however is that an 8 gigabyte SSD card isn’t big enough to install Snow Leopard on, even if you strip out every option that is available on the install routine.

Vostro A90 tiny keyboardTo that end, I picked up a 32 gigabyte RunCore SSD card (80mb read/40mb write as opposed to 70/15 for the old Crucial card) off of eBay and just finished with installing my legitimate copies of Snow Leopard and iLife. All I can say is “what a difference 9 months and the right SSD card makes..”

Way back in March, I used Gizmodo’s multiple CD-Rom method of installing Leopard (10.5) on the Cherry Red Dell Mini 9. This time, I used MechDrew’s single USB stick method, which meant that I didn’t have to deal with boot commands, or learning to hack the command line for all sorts of little tricks and boot options.

So far, this little beasty boots within a minute or so (no slower than my 27? iMac), and seems to be — for all intents and purposes — about as peppy as the original Intel Core2Single processor mac Mini. Even with 1 gigabyte of RAM, programs seem to launch without any problem and so far, I haven’t found ANYTHING that doesn’t work exactly the way a Mac Mini or iMac would.

Even the camera in Photobooth works!

All in all, unless things change, this should remain to be a suitable carry box for exactly what a netbook does best.

Now let me get to the bad.

In the end, I find myself completely with mixed emotions here. I am still unabashedly Apple’s bitch. I have an iPod, an iPhone, an iMac, and now this. In the end, I’d prefer Apple hardware because I trust it more. At this time however, I’m just a slave to my own needs and requirements.