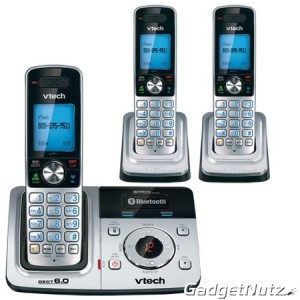 VTech’s New Phone System is What Your Home Needs

With all the advances in mobile phone technology it’s easy to forget that you more than likely have a phone system at home as well. Technology in home telephones hasn’t stood still and VTech’s new DS6321-3 phone system represents the current state of the art quite nicely. With phone styling slightly influenced by the mobile phone market, a digital answering machine, and three cordless handsets this is all that the average home needs. 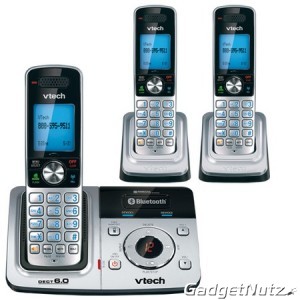 The first feature of this phone system woth noting is the use of (Digital Enhanced Cordless Telecommunications) DECT 6.0 technologies. Technically this is a 3G specification and was originally developed for home and corporate commnications systems in Europe. When brought to the US the transmission frequency was changed, but otherwise the specification remained essentially the same. It’s a (Voice over Internet Protocol) VoIP technology that provides the clearest digital signal you could ask for in your home phone. The range is also quite impressive for a home system allowing operation to nearly 300 feet from the base station. (your range will vary depending on walls/etc.)

VTech have also done something really amazing – they’ve used Bluetooth technologies so that it can download your mobile phone’s contact list (up to 6000 entries from up to four phones!) and even allow you to answer and make calls with your mobile phone from the VTech handsets! Just pair your phones (up to two at one time) with the VTech and leave them near the base station and you can use your VTech phone system as a fancy Bluetooth handset. In this manner you won’t even really need a landline for your home and yet still get the flexibility of a cordless home phone system combined with your mobile phone. You can even use a Bluetooth headset with the DS6321-3 and put down the handset while on a landline call.

The phone system also works as an intercom between handsets. The simple-to-use menu allows you to call any other handset directly. This is a feature I often wished for before these phones replaced our older models.

Another nice feature is the digital answering machine. Our old phone systems had one of these as well (in fact I think the same voice is used for voice prompts!) and it supports up to 14 minutes of recording.

While the system comes with three handsets it will support up to twelve handsets total and can transfer calls or conference calls between handsets. Other key features include an extra large LCD with blue backlighting for easy viewing, speaker phone operation on each handset and caller ID/call waiting.

The VTech DS6321-3 phone system is everything you’ll need for a home (or even small office) phone system. Clear calls, all the features you could want, and landline/mobile convergence.

The only negatives I could think of would be that I think the End Call and Connect Cellular buttons should swap position and they should put an extra select button in the middle of the dpad like many mobile phones and remote controls do. But heck, these are trifling issues at most.