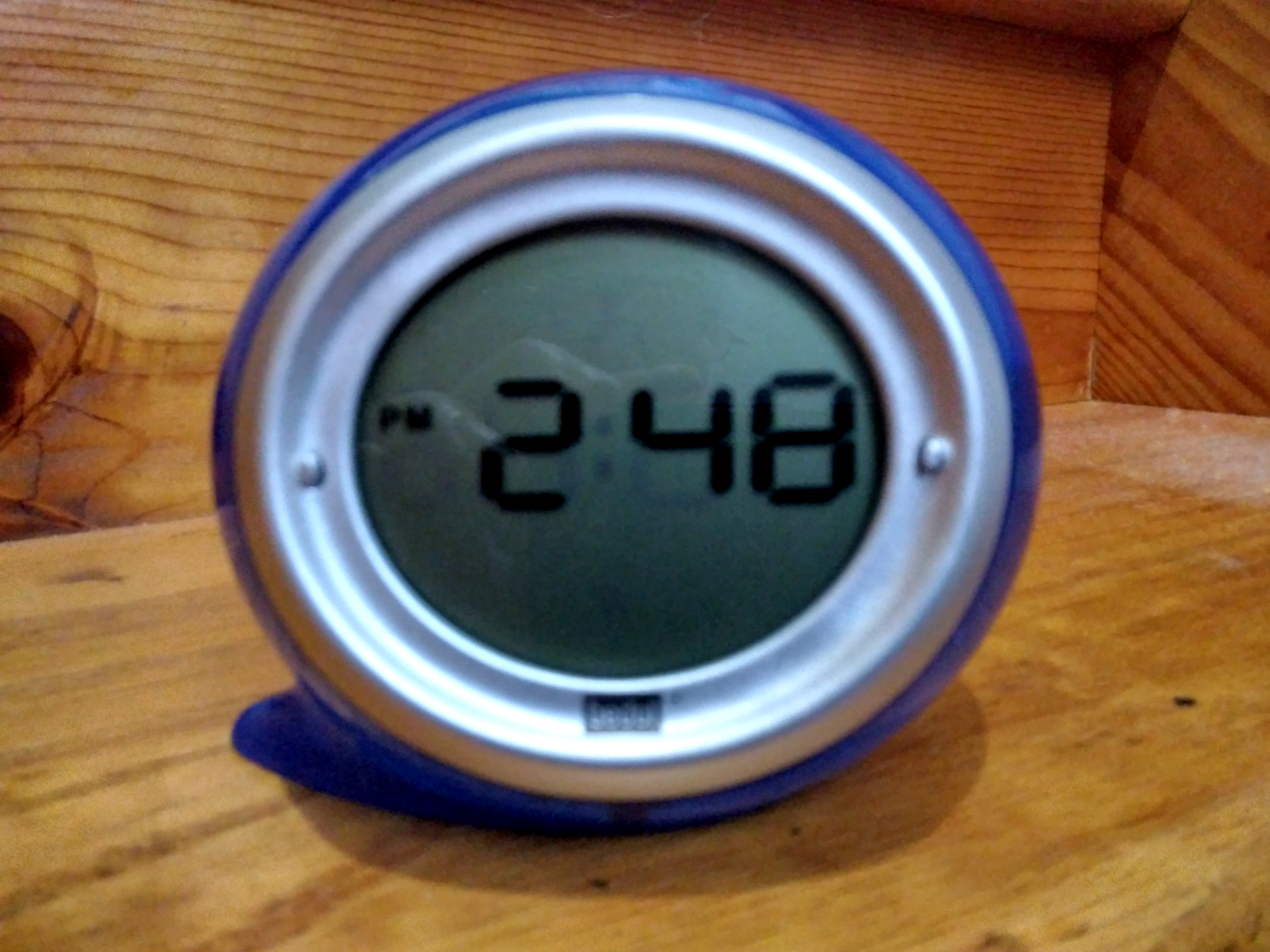 Dive in and Get your Water Clock

Bedol has come out with an interesting idea. Instead of using batteries to power ones clock, pour some water in it!  Well, I received their blue SQUIRT ALARM Clock. I’m not sure what is squiring, but I guess we’ll find that out later.

This is me filling the clock with tap water, as instructed. I’m just using a bottle to pour it in, it’s not bottled water. It may be difficult to see, there are lines on the clock body which show the minimum and maximum amount of water. There are also two chambers which should be filled about equally with water. According to the instructions I don’t need to change the water for about six to twelve months.

Once I added the water the clock immediately shows a time. There’s instructions for setting up the correct time using those two small buttons on either side of the clock face. You can change the clock from a 12 hour to 24 hour display. And you can have two types of alarms. One is set to go off every day at the same time. The other kind is an alarm every hour. For now I’m going to see how the alarm works at waking me tomorrow morning.

Here is the clock setting off it’s alarm. You know it’s going to go off because the Alarm ON symbol it shown at the top of the clock face. The alarms may not “work” as soon as you turn them on because, as the instructions indicate:  “Depending on the chemical make-up of your water, the clock might take longer to build up a potential difference between the two electrodes”. They suggest letting the clock sit for a day or so.

The Alarm for every hour only “beeps” once, so unless you are in a very quiet room and right next to the clock you probably won’t hear it. The daily alarm “beeps” for 30 seconds, but it also isn’t very loud. Unless you are a light sleeper I’m not sure this is useful as one’s only “wake up” alarm. However, it could be useful during the day if one needs an alarm for other activities.

As you can see on the web site, Bedol offers various models and colors. 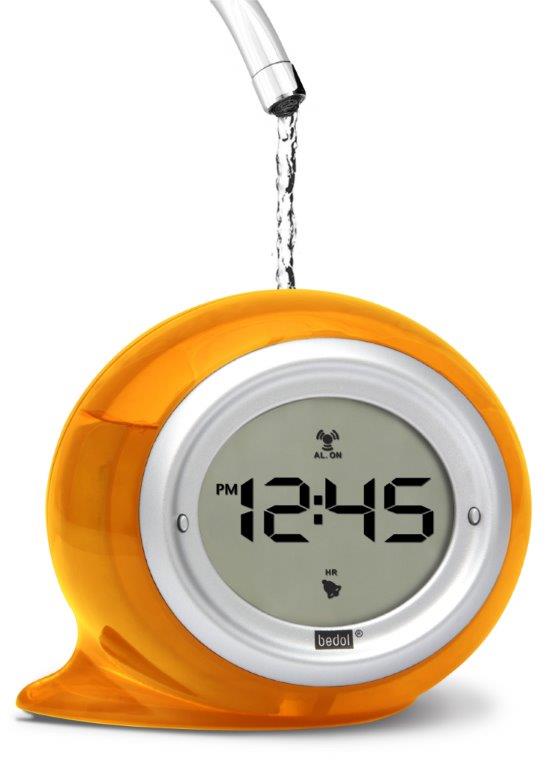 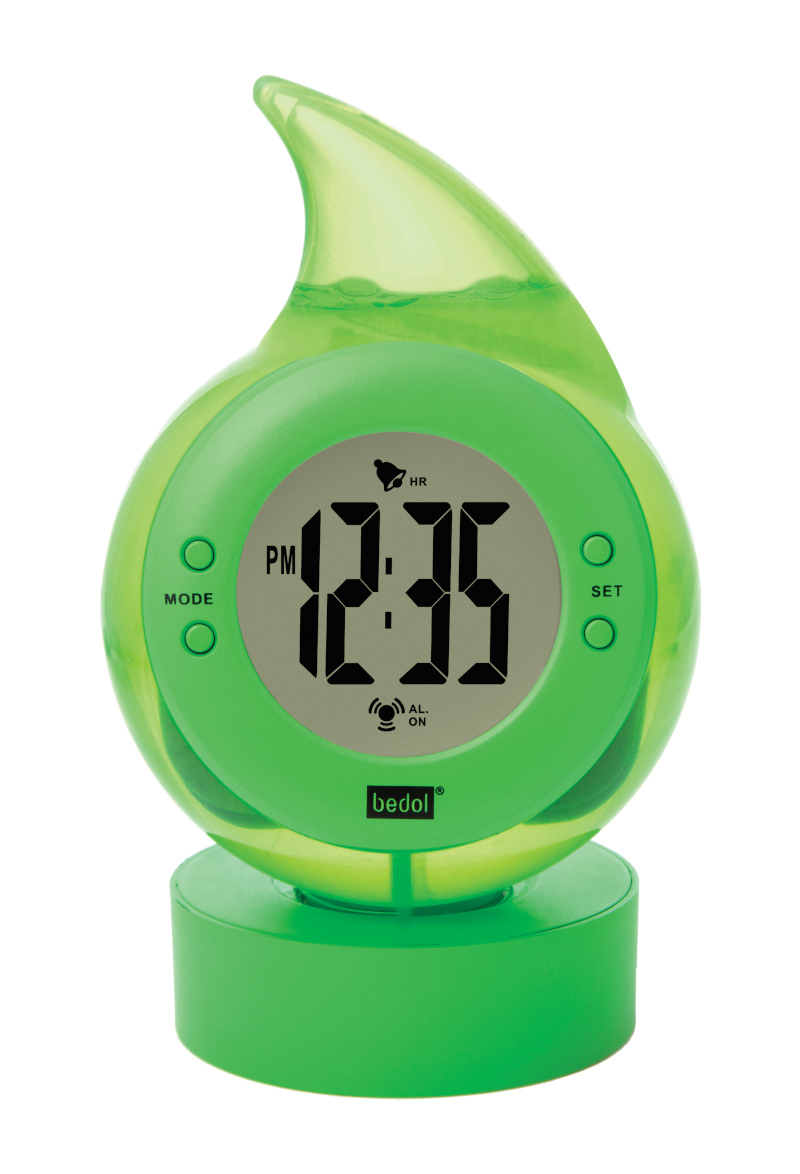 So, you won’t need batteries because the plates in the clock are the batteries while the water acts as the electrolyte. What’s the maintenance on this clock? Depending on the quality of the tap water in your area you only have to change the water when the display appears to fade. They also let you know that the water may accumulate “a milky white” appearance. This may not happen to my clock for months or years, but if/when it does I may also give the plates a quick wipe with a cotton swab. Then I’ll refill with new water. But I happen to live in an area with exceptionally clean water, so, who knows. In any case it’s a cute idea and useful. I still don’t know why it’s called “squirt”. Maybe because I squirted the water into the clock? The mysteries of the water clock……