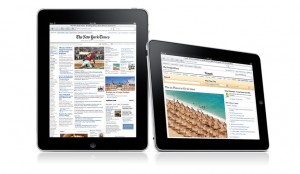 Apple Announces iPad and Nothing Else 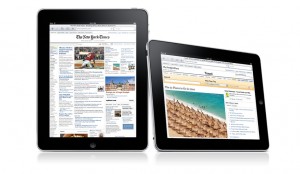 Apple today introduced iPad, a their latest revolutionary device for browsing the web, reading and sending email, enjoying photos, watching videos, playing games, reading e-books, and much more. Its high-resolution Multi-Touch display lets you interact with content — including 12 innovative new apps designed especially for iPad and almost all of the 140,000 apps available on the App Store. At just 0.5 inches thick and 1.5 pounds, iPad is thinner and lighter than any laptop or notebook. iPad will be available in March starting at the breakthrough price of just $499

That’s not bad. But where is iPhone OS 4? Where are iPhones for T-Mobile, Verizon and Sprint? (seriously. T-mobile iPhone would be a years worth of presents in one for me). So this was just a release/announcement for the new iPad which did get leaked.

Well – no. While I’m pleased and I think Apple can finally make tablet computing functional for the masses, there are some issues. They made a good move in building on the iPhone and maintaining backwards compatibility to it.  But the device itself isn’t quite as complete as it could’ve been.

Why no cameras? Why, oh why, are they putting yet another device only on the infamous AT&T network? (within the US) Why no memory expansion – c’mon, you can’t claim you couldn’t make it fit this time! Why no USB connectors? Why no microphone?

It’s also a touch too square and not inherently widescreen. I know the bezel needs to be there but couldn’t they put less bezel on the sides and a little more on the top and bottom to make it look a little sexier? What about HDMI output as well? This would’ve made a nice Apple TV/Boxee/TiVo killer as well.

No hardware buttons/touch case. I know for reading on this I would’ve REALLY liked to have had some buttons with a little feedback for advancing through books. Game authors would’ve loved some physical buttons too.

It also looks too much like the iPhone and why only speakers on one side? This isn’t a Bose tablet so we know we’re only going to get a mono sound even if they’re outputting both channels.

You know, no microphone means no voice control/input. Score an ongoing win for Google Nexus One.  (Correction: they didn’t announce the mic but it’s listed in the specs)

Where is the multitasking? I’ve got a jailbroken iPhone 2G running Backgrounder and Proswitcher and it multitasks very well and we’re talking at best half the speed of the iPad. I don’t want to hear that White Lie about multitasking hurts battery life. Bull. Using your device drains the battery. Whether it’s one app or fifty. Besides, when Apple made this claim they conveniently forgot to mention that many of the built-in apps on the iPhone do multitask. Safari, Mail, etc are still running after you run them the first time. That’s why they restart so quickly.

Flash is missing (from the world’s greatest web device no less!) but I count that as just a ‘missing right now’ feature. Still, it’s stupid.

Oh hell yeah! Ignoring the issues above, what they did on here they did right. Typical Apple, damn their creative souls. eBooks (er, iBooks) look really really good. I hope this app ends up on the iPhone as well. iWork is the best tablet office suite around, but Apple better be keeping an eye on similar apps on the Cloud. They’re getting better and better and work everywhere. Desktop and tablet. The interface improvements are very intuitive and logical and attractive. It’s a perfect marriage of design, affordability and real world application.

Yeah. I got at least one last worry. Flash memory. 10,000 write cycles approximately. This device is likely to be used for a lot longer than your cellphone so the inevitable death of your flash memory might become an issue. Won’t it? Will it?