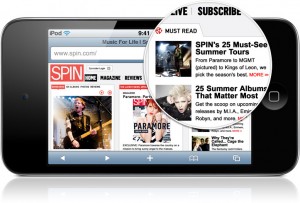 For the people who were at the 1964 New York Worlds Fair and marveled at the idea of seeing who you were talking to, the iPod touch takes that to the next level. Video conferencing has arrived and it’s in your hand.
Phone calls with video are possible because the iPod touch has two cameras, one in front for the video conferencing, one in back for snapping pics. And the view has been improved by Retina display. Which is basically by scrunching each pixel smaller they can make More pixels. Like 326 pixels per inch. This leaves the user with a very sharp display. The 960-by-640 Retina display is impressive.
The camera in the back can record in HD. Use iMovie app available at the App Store for just $4.99 to EDIT your HD moves right in the iPod touch adding transitions, music and photos to your footage.
Tons of games and apps to add to your iPod…. 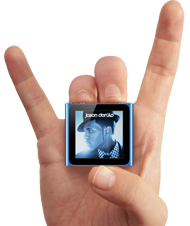 The new iPod nano puts a touch screen in a Very small package. It looks so small I’d be afraid to accidentally swallow it. har har. But this is the easiest way to carry your music, an FM radio in 8GB or 16GB sizes with a 24 hour battery capacity. Just clip it on a sleeve or pocket (with a screen that flips and rotates to let you see it conveniently). You can program the audio to be stereo or mono, change the screen contrast for easier viewing. I’m impressed with the VoiceOver feature. This is a gesture-based screen reader. Touch the screen to hear a description of the item under your finger, then double-tap, drag, or flick to control iPod nano. 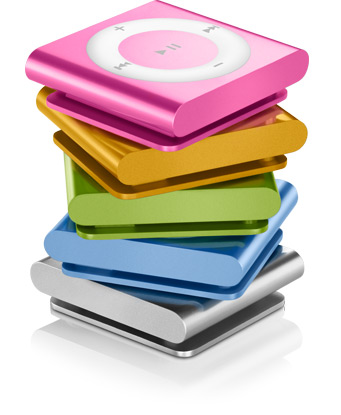 The new iPod shuffle has 2GB of storage, 15 hours of battery life, is clip On and comes in five colors.
If you want to know the title or the artist of a song you are listening, press the new VoiceOver button on top of your iPod shuffle, and it tells you. You can even use VoiceOver to hear the names of playlists and switch between them. And if your battery needs charging, VoiceOver tells you that, too.

Apple TV is a service to rent movies and TV shows. Just plug the little Apple TV box into your widescreen TV using an HDMI cable. Turn on, watch TV.