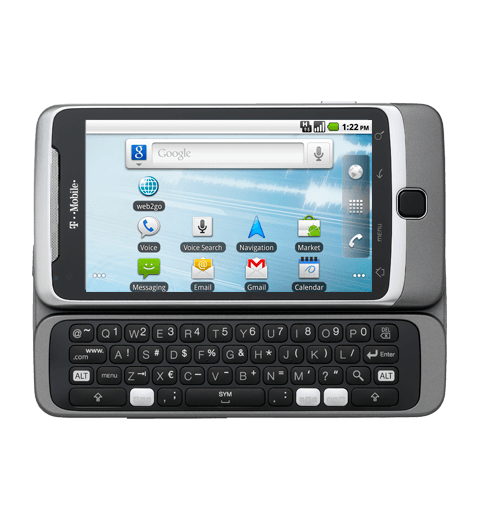 Speak to me: G2 Phone with Google Voice

I have a couple of disclaimers to make here.

The first is that I’ve never had a smartphone before. A few moderately bright phones, sure, but I’ve never had one of these hand-held multi-media computers before. Two weeks is not nearly enough time to properly appreciate a device like this.

Then there’s the obligatory disclaimer that T-Mobile loaned me this unit completely free of charge, and that my comments here are solely my own and not provided by T-Mobile. Well, unless I put them into quotations, of course. The gist of it is that I’m a reviewer, not T-Mobile’s mouthpiece. I probably should also mention that for the last five years, I’ve been a T-Mobile pay-as-you-go customer, and I’m not going to get a rate reduction or some other compensation for this review. (Although I wish they’d let me keep the phone; I’ve gotten rather fond of it. Guess I’ll have to buy one of my own.)

Let me start out by saying that having a G2 phone on a 4G network tends to confuse me a bit; couldn’t they have called it something else? For the record, “4G” is “fourth generation” networking, and I have no idea what “G2” is supposed to stand for. Maybe it’s “generation two” of the Android operating system?

The G2 with Google (to use its full name) has all the bells and whistles I would expect from an Android computer-that-thinks-it’s-a-phone. Google, Google Earth, Google Goggles (not just a phrase in baby-talk), Google Voice, Google SkyMap, Google Translate, Gmail . . . Okay, it’s heavily weighted towards Google applications; is that a surprise? Worry not, it also has Twitter, Facebook, a clever shopping app, GPS-assisted navigation, web browsing, maps, financial market tracking, news and weather apps, the Quickoffice suite, YouTube, WiFi and Bluetooth access . . . And if the included applications aren’t enough to suit you, you can always download some.

So, nothing unexpected there. Impressive, but not unexpected.

How about the hardware? Well, it’s capable of running on T-Mobile’s 4G network at up to 14.4 Mbps (Your mileage will vary depending on network availability in your area, traffic on the network, reception . . . all of the usual variables.). I was never able to test it at full speed, but I got what I felt was a respectable 5.0 Mbps reading from speedtest.net even in this rural area.

Much of the functionality is accessed through the touch screen, which means fewer physical buttons to accidentally bump. (A roommate of mine nearly always accidentally hung up his phone when pulling it out of his pocket because of the way the buttons were arranged on the sides of the phone.) There’s a small but serviceable fold out keyboard, which I find easier to type with than the touch screen keyboard.

I found it attractive in a generic the-whole-surface-is-a-screen way that many phones have. It’s somewhat larger and heavier than my existing cell, but not enough to complain about. I would definitely want to buy or make myself a holster to put it in, as it does not come with one.

The five megapixel camera has autofocus, digital zoom, an LED flash and can double as an HD video camera. You can expand (up to 32 GB) or swap out your memory via a microSD card, which is located under the replaceable battery. That’s inconvenient for fast swapping, but good from a physical security viewpoint, as it’s harder for someone to grab the memory chip without you knowing about it. The “internal memory” for the phone is 4GB.

The AC adapter consists of a small “wall-wart” with a USB port, and a separate USB to micro USB cable, so where ever you can find a USB power source, you can charge. Charging only takes a couple of hours on the “wall-wart”, and the battery lasts for days in stand-by mode. If you use the GPS device a lot, expect your battery to last for about five hours. The very nature of GPS operation requires a lot of power, so bring an adapter or use the GPS sparingly.

Speaking of the GPS, I’ve always wanted a GPS navigator for my car. If I buy one of these phones, I won’t need it. A clear if synthesized female voice gives me turn by turn directions while showing my position on a map. I can mute the voice if I find it annoying, and I can also get text directions.

My fiancee’ is a self-proclaimed “map geek” who also does anthropological work out in the field from time to time. So, she liked the mapping functions and the ability to use the GPS with Google Earth.

Also, there are a variety of applications out there (some of them free) that allow you to “geo-tag” any photos you take with the GPS coordinates of where you took them. (If you’re familiar with digital photo formats, the information is stored in the EXIF portion of the file. EXIF readers are readily available on the net.)

The voice recognition worked fairly well, despite the fact that I’m a bit mush-mouthed. I found that it was much easier to get it to send text messages and dial a number by voice if the target already existed in my contacts list. I never succeeded in using voice alone to send text or dial a number if the contact did not already exist. Using voice recognition for the web search, GPS and Google Earth applications sometimes caused some humorous mis-matches, but I was usually able to correct it. Voice to text in text messaging seemed to work very well.

All in all, I want one. Perhaps I’m easily impressed because this is my first smartphone, but I’d rate it nine out of ten. I especially liked the fact you could handle it without accidentally hanging up, a serious short-coming on my roommate’s phonoe.