On January 6th, T-Mobile issued a press release that their 4G network, which currently serves approximately 200 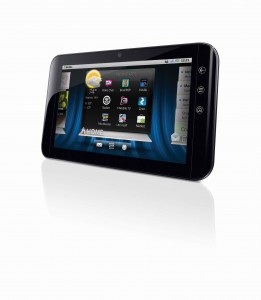 million people (and growing), will soon double its download speeds. They also announced new data-hungry devices designed to drink deeply of this new stream, such as the new 4G tablet, the Dell Streak 7 (pictured).

“In 2010, we delivered on our ambitious goal to become America’s largest 4G network, and this year our customers will be able to experience speeds equivalent to home broadband while on the go,” said T-Mobile’s CEO and President, Phillip Humm. “We’ll continue to focus on fueling the adoption of mobile data, by offering innovative and affordable smartphones and tablets, as well as aggressive data plan pricing and rich and compelling data services.”

The cutting-edge download speed was demonstrated today by company representatives using a T-Mobile laptop stick developed by ZTE, capable of delivering peak download speeds of up to 42 Mbps and slated to launch in the first half of 2011. By doubling the speed of its 4G network, T-Mobile will offer its customers an unprecedented wireless experience, fueled by improved performance in the use of rich media applications, including creating and sharing mobile content, streaming video, and participating in multi-player gaming and videoconferencing.

“We are pleased to support T-Mobile as it continues to deploy and develop its 4G network, which today is delivering next-generation speeds and performance to hundreds of millions of customers,” said Angel Ruiz, president and CEO, Ericsson North America. “We are confident that HSPA+ will continue to offer a viable and cost-effective alternative to LTE and WiMAX, providing a comparable 4G experience to customers for the foreseeable future. And, with a strong and growing ecosystem of network equipment and handsets, we anticipate that HSPA+ can develop into one of the most advanced technology platforms in the industry.”

“Consumers are increasingly embracing the benefits of smartphones, with 80 percent of U.S. mobile customers wanting a smartphone, and as many as 100 million of them not yet having one,” said Cole Brodman, chief marketing officer, T-Mobile USA. “Our compelling offering of affordable broadband devices and consumer-friendly data plan pricing will enable customers to step up to mobile data and 4G, and our customers will not pay a toll to ride on our 4G superhighway.”