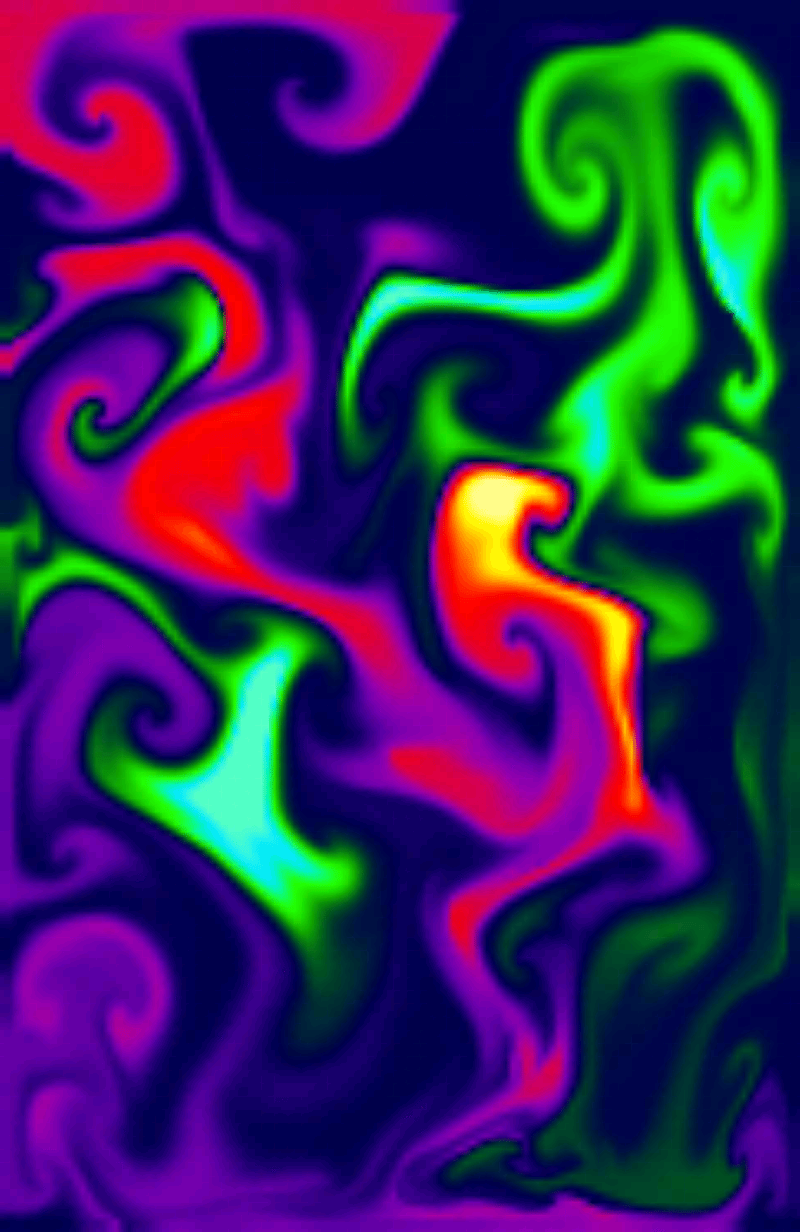 Will I get Kidnapped for my XOOM?

So, Motorola / Verizon are letting loose on the public their version of a Tablet they call XOOM. It’s Google’s first Android Honeycomb tablet. Just smaller and lighter than most netbooks it has great potential. Right now one issue is the SD memory card slot is not operational. I’ve already experienced one system upgrade but it didn’t include adding SD functionality. It’s not as if there isn’t plenty of storage on the device itself – 32 GB. My main concern was how to get images off the device. I found a solution which I’ll go into later. What it does have: GPS, WiFi, Bluetooth, can run B&N Nook AND Kindle software, HDMI-out, rear-facing 5 MP camera that records 720p video, a 1280×800 widescreen; 10.1-inch display. This weekend there was a flash 10.2 update which automatically arrived over the air.

If one is unfamiliar with touch screens it does take a short time of practice to ‘get it’, but once you know where the Back, Home and Workspaces gadgets are (bottom left) it becomes second nature. I’m also familiar with Linux so the feel of the XOOM seems responsive, fast and comfortable. Moving the App icons around the screens is fairly easy. Without any instruction I figured out you hold your figure on the icon you wish to move long enough to see a slight glow around it – move it to or near where you wish it to be. A grid will sort of appear and the icon will snap to the nearest ‘box’. Moving an icon to the next Workspace is like making it ‘jump’ over the edge, if you get what I mean. Once on the next workspace you can then continue Moving the icon to the exact location in that space. If you have un-installed an app and the icon is still on your screen just move it to the upper right and throw it in the trash can. The word Delete should appear. It’s quite easy to keep your screens customized and tidy.

A fairly straightforward operation: Point, play with setting, click. One thing I love is the way bigger screen which makes it much easier to see what I am focusing on. people with older eyes will appreciate what I mean.
I took several pictures of a bouquet of flowers my mother received for her birthday. The original is 2048 x 1536 and was photographed under a regular light. I cropped a section and saved as png to keep the quality. Looks good. 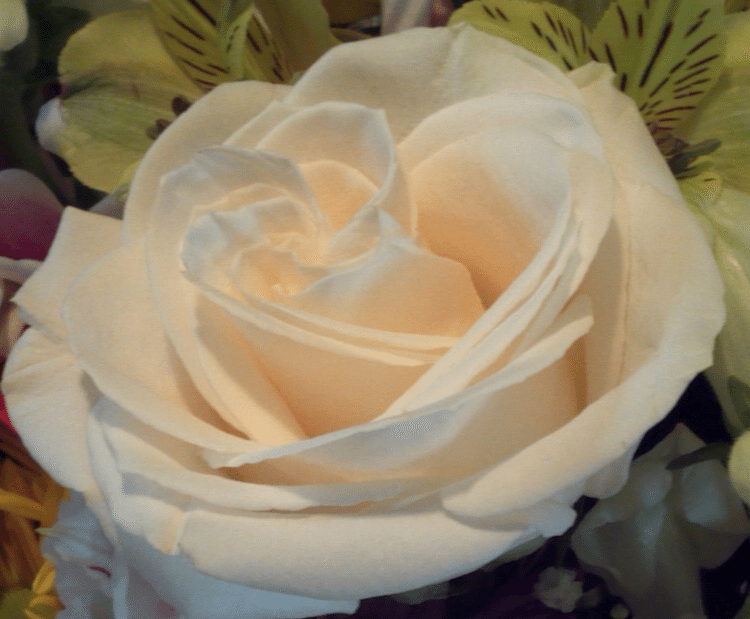 As expected it’s easy to set up. Once you have paired it with another device or computer it’s quite seamless to operate. I paired it with my laptop in order to transfer images because right now this is the easiest way to transfer files. I went to the Gallery which is where the camera image are stored. View an image (selecting it) and at the top right of the screen are icons. The three prong icon brings up 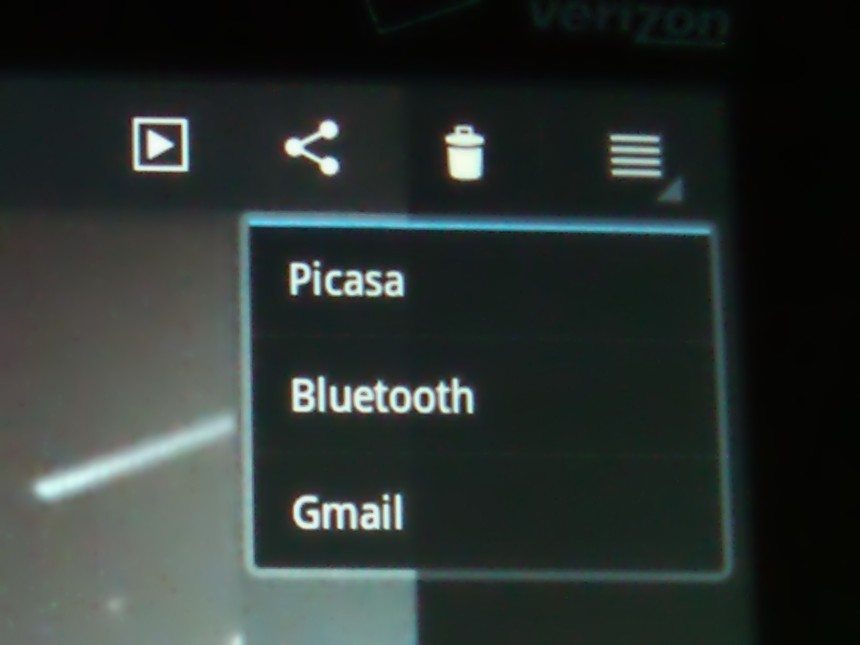 You can send the image to Picasa if you have an account, Bluetooth and Gmail, Tap on the Bluetooth a window pops up the device list: 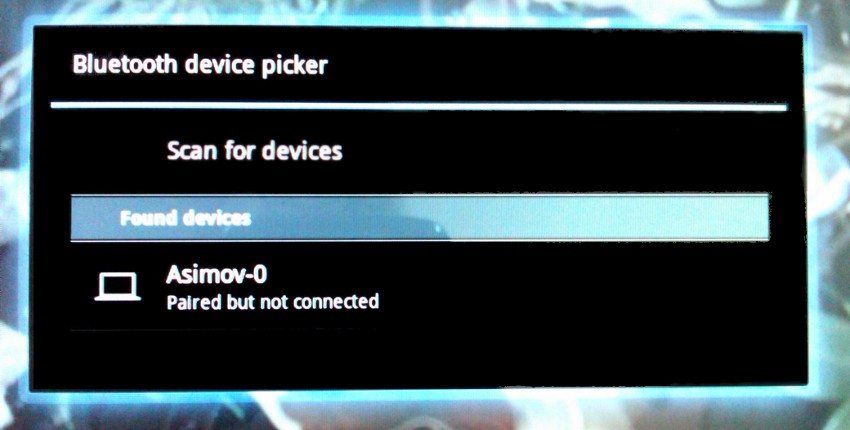 My laptop shows up – I tap on that and the picture is on it’s way. My laptop acknowledges receipt of the image. I found I could quickly go through a list of images without having to wait for the previous one to upload. In other words, the Tablet is very responsive, no sluggishness at all. I’m already a fan of Bluetooth and the XOOM performs quite well.

I did try to send a picture TO the Xoom and had to try about three times because you have to be FAST to click on the pop up window to acknowledge receipt of the file on the XOOM. That’s slightly annoying but not a huge problem. Once you realize it’s a Test Of Speed you do your best to play along. I’m sure all those kids with their fast little fingers will do fine.

One of the first things I played with was using the Android Store to get some APPs. I downloaded Goggle Earth, Sky Map, Skype, Facebook various paint apps, and animated wallpapers.

and then adobe lets me know there’s no support for the XOOM. AT least not yet. What you have to do is go to the Android Store and download Adobe Flash Player 10.2
Once that is on the XOOM logging into your Facebook using the browser account lets you use FB normally.

In any case, there’s no lack of entertainment on this XOOM

The HIT of this device is Fleya, which simulates real-time fluid dynamics. The new multitouch feature (which arrived with Saturdays’ automatic upgrade) means that the program responds to Any fingers swiping the screen. Sometimes the reaction seem less than immediate but the images are so fascinating to watch as they evolve. I was visiting a friends place and her daughter (college graduate) was hypnotized by this app, Who isn’t? She spent what seemed like hours rubbing her fingers violently over the screen. The new upgrade also lets me save images, which I did and have placed here on flicker.

Some android devices report problems but this app worked perfectly on the XOOM. I predict that THIS is what will sell the device more than almost anything else. I was afraid my friends would kidnap me so they could keep the XOOM. Well, almost.
The developer explains here some of the settings here which is interesting. I mean it’s not just wavy stuff floating around. It’s Science.

More info about the XOOM with this video.

Another article to follow dealing with Skype, video and other XOOM adventures……