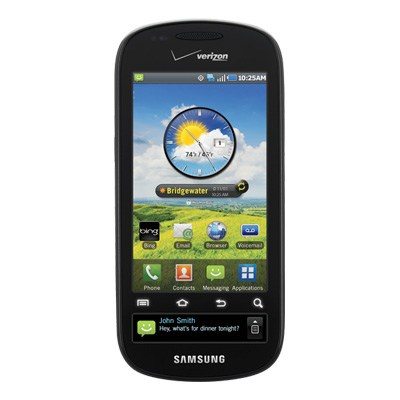 Samsung expands its Galaxy with the Continuum

I have a couple of standardized disclaimers to make here.

The first is that this is exactly my second smartphone review, (also involving the Android OS) and I must say that I’m already developing preferences. One of those preferences is for a hardware keyboard.

Then there’s the obligatory disclaimer that Verizon Wireless loaned me this unit completely free of charge, and that my comments here are solely my own and not provided by Verizon Wireless. The gist of it is that I’m a reviewer, not Verizon Wireless’s mouthpiece. I probably should also mention that for the last five years, I’ve been a T-Mobile pay-as-you-go customer, and I’m not planning on switching services any time soon, even if they let me keep the phone.

Samsung’s Galaxy Continuum is a more modest phone than my previous review. As a result, it has fewer apps on board, but I’m already learning that certain apps are going to be common to many smartphones. A navigation program that can access the GPS, Bluetooth capability, WiFi access and also the ability to act as a broadband modem for several devices as a WiFi hotspot, music playing software, a camera program that can also record video, YouTube, Facebook, news, weather, file access and management. Browser, email, voice mail, and a couple of games, and everything you’d expect on an “merely” bright phone like address book, calendar, calculator, clock and so forth.

How about the hardware? One of my favorite pieces, a hardware keyboard, is not there. I cannot seem to get the hang of the touchscreen keyboard (especially if I’m a passenger in a car, even on a smooth road), and my typo rate goes up considerably. So does my blood pressure. Out here in the boonies, we don’t have all the latest network improvements, but we do have 3G, and speedtest.net showed a comfortable 5.0Mbbs download speed, just like my previous review phone.

The rest of the hardware is a 5 megapixel camera with autofocus and LED flash, 3.4” touchscreen with AMOLEDs (Active Matrix Organic Light-Emitting Diodes), and a smaller AMOLED “ticker” display for that news-ticker information you need the moment you pick up the phone. This one had an 8GB SD card and 2GB of internal storage, with a 1GHz processor consulting a 512 MB ROM running the show. As is common, the SD memory is expandable to 32 GB.

The ticker display is programmable from the built-in apps, so you can do weather, RSS feeds, email announcements and the like. Whether third-party apps can also use it is less clear. Unless ticker displays become a common feature, I wouldn’t expect many ticker-aware apps from third parties. It uses “grip sensors” to activate the ticker display the moment you pick it up (unless, like me, you keep picking it up by the wrong end first). Thus, even before you’ve unlocked the keyboard, you can see what’s important to you.

I’ve already gushed over the USB a/c adapter concept in my previous smartphone review, so I’ll simply say that the a/c adapters should always have been cross-compatible, and now, it appears that they are.

Despite the toll taken on the battery charge, I’m a big fan of GPS systems, and the Continuum is equipped with the hardware and software to use GPS. I’m less a fan of Verizon’s Navigator, which unlike Google Maps, does not seem to believe my address exists, even with the aid of GPS. Yeah, I live in the boonies at the end of about a thousand feet of dirt road, but that address has existed for at least a decade. (Well, the local phone company and the local cable company are a little uncertain about us, too, so maybe I should cut Navigator some slack. But it’s still annoying.)

Because my fiancee’ is an anthropologist who does field work, I share her fascination with the ability to geo-tag photos. I am finding, however, that not all phones are created equal in this area. Some Android-equipped phones allow you to geo-tag an image as simply as changing a setting in your camera preferences. Sometimes, you have to get a third-party app to geo-tag your images.

The Continuum doesn’t offer the ability to geo-tag in the camera preferences at all, and I’m having some problems finding an app that tags the image by using the EXIF image metadata. I have looked at several apps that will show me on a map where my pictures were taken when I can manage to get the data into the EXIF metadata, but after trying several apps, I cannot seem to get reliably tagged information. I don’t know if that’s my fault or the phone’s, but this is another area where I’m a bit disappointed.

Voice recognition does not seem to be my friend when browsing or dialing numbers. It works fairly well in texting, and it seems to be willing to deal with people in my contact list. I’m a bit mush-mouthed, so the fault may be mine. Text to speech conversion is fairly effective, with only a few mistakes here and there.

I definitely like the voice Caller ID function, although it seems to replace the ring tone entirely. If you’re a little hard of hearing, or the phone is muffled in your pocket, you might want to consider sticking with a ring tone, which can be louder and easier to hear even in noisier environments.

I’d give it about an eight. It’s a competent work horse that can be had for a relatively low price with a contract and lower than the MSRP even without a contract if you shop around. Don’t forget to get a holster for it.

(SAR stands for Specific Absorption Rate which is the unit of measurement for the amount of RF energy absorbed by the body when using a mobile phone.)