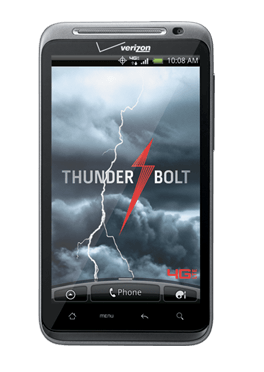 HTC and Verizon Wireless jointly put out a press release on the recently released Thunderbolt smartphone.

Sounding as much like a commercial as a press release, they are nothing if not enthusiastic about the new device.

Read their release below:

With this much power, speed and Android™ awesomeness, it’s not your dream phone. It’s the one after that.

Download movies, e-books, games, music and more in seconds. Pop out the kickstand, turn up the surround sound and enjoy hours of entertainment on the hi-res 4.3″ screen.

With an 8MP camera, LED flash, in-camera effects and a 720p HD camcorder, you can capture every moment in picture-perfect resolution.  And with 4G uploads, you can unleash it instantly, for all your friends to see.

Built-in DLNA connectivity takes all the music, movies and photos on your phone and beams them up wirelessly to your flatscreen.

Launch a mobile hotspot and just like that, your phone turns into a wireless router, providing a Wi-Fi™ connection and the power of 4G for up to five devices.

The wait is over.

With a 1GHz Snapdragon Processor and the power of Verizon’s new 4G network, you can say goodbye to the loading bar.  And with the new instant-boot feature, you can say hello, faster than ever before.