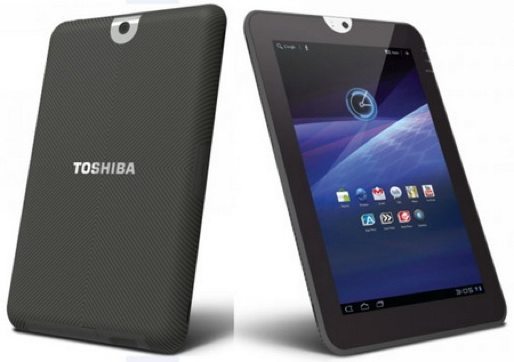 Fast as any other Honeycomb Tablet you’ll find! The Toshiba Thrive

The tug of war for devising the supreme tablets infused with the best in technologies has been seen to be getting tougher and tougher. After witnessing an array of feature-loaded tablets from manufacturers worldwide, we now have the new 10-inch Toshiba Thrive which touts to be just as speedy as any other Honeycomb tablet in the market. Though slightly late in stiffening the competition, the company however lays claims to revamp the tablet interaction with a whole new approach.

Featuring a high resolution 10-inch LED-backlit display, the performance-oriented device emerges to be just perfect for watching movies, reading books, surfing the web, or playing interesting games. For enhanced versatility and legibility, the integrated adaptive display technology enables users to bring adjustments to its brightness and contrast according to the surrounding light conditions.

Tagged with an affordable price point, the device comes equipped with full SD card slot and support for HDMI and USB. However, the device’s thickness may appear as a disappointment to consumers who prefer piggybacking a lightweight device on their trips. In terms of design, Thrive houses a slip-resistant, rubberized surface and renders users with a choice to personalize their tablet’s appearance with six vibrant colors.

Apart from this, the stylish tablet comes equipped with stereo speakers and impressive custom sound enhancements to render an immersive user experience. With this one around, users can seamlessly watch their time-gripping flicks, listen to favorite music, and bring games to life in a way never experienced before. The performance-driven device also accommodates several sensors such as gyroscope and accelerometer. Users can simply tilt the tablet into a portrait or landscape format by utilizing its integrated capability of a full 360 degrees of rotation. The feature-packed device boasts of Toshiba-branded file manager and Resolution+ software. Weighing around 1.6 pounds, the tablet also reveals a 3.5mm headphone jack and a docking port for its video and audio accessories.

About the author: Amanda Kidd is a blogger who is fond of writing on tech help and most expensive gadgets. She is all into computers and in recent times she learnt a lot about software downloads and android on windows mobile. These days she is busy in writing on social media.