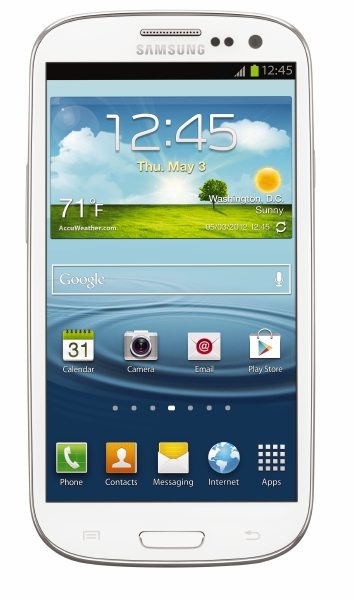 U.S. consumers on five major service providers will now be able to own the highly anticipated Samsung Galaxy S® III. Galaxy S III, optimized for peak performance on the nation’s fastest 4G LTE and HSPA+ 42 networks, will be launching with AT&T, Sprint, T-Mobile, Verizon Wireless and U.S. Cellular starting in June. Exact pricing and retail availability will be announced by each of the five carriers in the coming weeks.

“The U.S. launch of the Galaxy S III is the most anticipated launch of the year. As promised, we are delivering the ‘next big thing’ for U.S. customers and across all major carriers,” said Dale Sohn, president of Samsung Telecommunications America. “Galaxy S III introduces new technological innovation and takes sharing to the next level.”

With the Galaxy S III, Samsung is setting a new standard for smartphones. This device was designed to be lightweight, durable and powerful. The Galaxy S III weighs 4.7 ounces and is 8.6 millimeters thin, making it lighter and sleeker than other leading smartphones, including several competitor models with smaller displays. The brilliant 4.8 inch display extends to an ultra-thin bezel to maximize the viewing area. The Galaxy S III delivers impressive processing power to allow more applications to be accessible simultaneously.

The Galaxy S III goes far beyond content consumption to content sharing. Continuing its history of innovation, Samsung has simplified how consumers share content and control the device with a single touch, through enhanced gesture technology or the simple movement of the eyes.

The content sharing experience on the Galaxy S III addresses the sharing needs of consumers, whether it’s sharing and editing a presentation with a large group in real-time, sending digital images to several other smartphones at the same time or transferring large files within seconds from one phone to another. Further, these sharing experiences are simple and require little, if any, set-up.

The Galaxy S III introduces the next evolution of Samsung’s content sharing service with AllShare® Play. This service automatically notifies the Galaxy S III to Samsung HDTVs, mobile tablets, laptops and other consumer electronic devices on the same network that are ready to receive video files. Users can also remotely access files from devices on other networks. 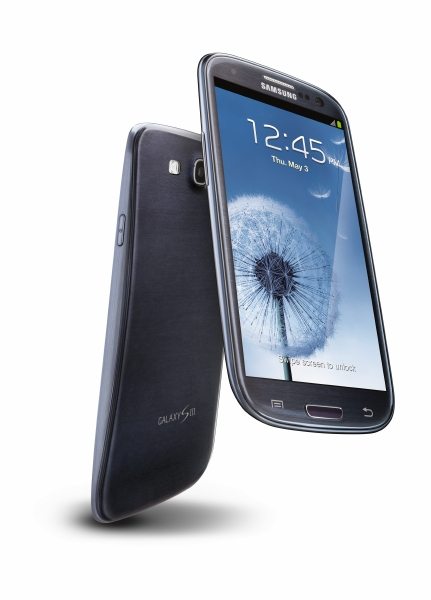 With AllShare Group Cast on the Galaxy S III and a Wi-Fi network, users can share and collaborate on documents, presentations or images in real-time with multiple friends or co-workers’ without loading the file separately.

With Share Shot, become the official photographer for a group of friends. There’s no need to send photos and video via email, MMS or a USB drive. Users can quickly and seamlessly share pictures taken with the Galaxy S III’s 8 megapixel camera to other phones from up to 200 feet away. Once the Galaxy S III is synched with chosen devices, the pictures are automatically shared.

S-Beam is an industry first, providing fast, easy transfer of large files, such as videos and documents, with a single touch of the Galaxy S III without needing a Wi-Fi connection or cell signal. A 1GB movie file can be shared as quickly as three minutes and a 10MB music file can be transferred in seconds by simply touching another GALAXY S III phone. 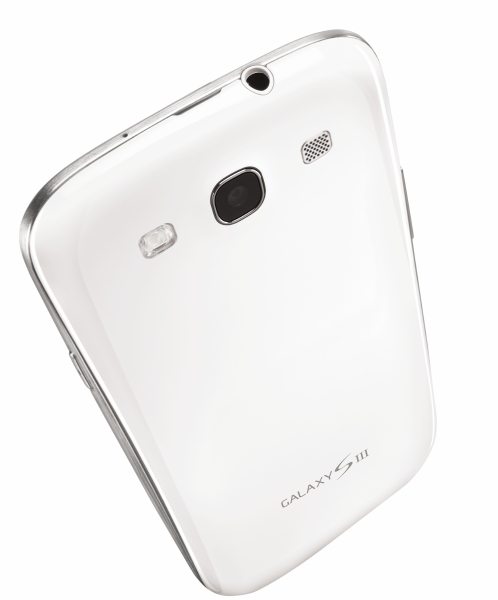 – The S-Voice™ feature on the Galaxy S III offers much more than just asking and answering questions. S-Voice allows users to control the applications and services used most with words instead of touch. Use S-Voice to turn the volume up or down on the music player, answer or reject incoming calls, shut off or choose to snooze the alarm clock, or take a picture by saying “smile” or “cheese.”

– Smart Stay puts the “smart” in smartphones. With Smart Stay, the Galaxy S III tracks the user’s eye to ensure the device screen is always on while you’re looking at it. By knowing when you are looking at the screen, it doesn’t dim the backlight or timeout to an idle screen.

– Motion simplifies and short cuts many common functions including converting a text message to a call by simply raising the phone to the ear, tapping the top of the phone to go to the top of an email and list of emails or contacts, and alerting to missed call or text message.

– The capabilities of the Galaxy S III’s 8 megapixel camera are far beyond point and shoot. Burst Shot captures still pictures at a rapid-fire pace at three images per second with zero shutter lag; and Best Shot recommends the best picture to keep based on colors, lighting and clarity. The Galaxy S III shoots and plays back 1080p HD quality video with a backside illuminated sensor that improves performance in low light environments, and provides the ability to capture a photo during videoing

– Watching video while downloading a large file or service is seamless with Pop Up Play. Pop Up Play allows you to watch any side-loaded video content while operating any application in full-screen, background view at the same time. Video running on Pop Up Play can be moved anywhere on top of the full screen, much like picture-in-picture capabilities on large screen TVs.

The Galaxy S III, which comes in Marble White and Pebble Blue, is powered by a removable 2100 mAh battery for extended use on a single charge. Users can store large libraries of photos, videos and music onboard the Galaxy S III with expandable memory to compliment the standard 16GB or 32GB of onboard storage.

“The Galaxy S III is the most innovative smartphone on the market today. It is an industry first to see five major carriers align behind the launch of a single device virtually simultaneously,” said Todd Pendleton, Chief Marketing Officer for Samsung Telecommunications America. “To support the immense excitement for the Galaxy S III we will execute our biggest marketing campaign ever. Consumers won’t be able to miss why this device is the must-have smartphone.”