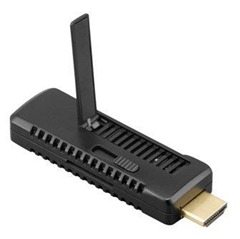 DVR on a stick! The iPazzport Mini-TV Dongle

The people over at EFO Gadgets (http://efo.buy-lowest.com) have done it again and are distributing a compelling and inexpensive gadget produced by iPazzport (www.ipazzport.com) that is a must-have for Android fans and developers. It’s a complete Android 4.0 (ICS) device the size of a large USB flash drive.

The goal of this the Mini-TV is, as the name suggests, to provide an Android-powered Smart TV device similar to a Roku and in it’s way it is also similar to the Google TV devices and to a lesser extent the Nexus Q. You use the Mini-TV to stream video from the internet or from video files you store on the Mini-TV itself.

The Mini-TV plugs directly into an HDMI port on your TV which is where it gets it’s display. In my testing I found it worked flawlessly at all HDTV resolutions I output without any latency or frame skipping. The actual output resolution seems fixed at 720p however.

I loaded several movies I had in 720p and 1080p resolution and the playback was as good as I could ask for.  The Mini-TV comes with it’s own video player but I also found that other video players, such as the excellent Moboplayer installed from the Google Play app store, worked fine as well.

Android 4.0, also known as Ice Cream Sandwich/ICS, is the operating system for the Mini-TV and it considers the Mini-TV to be a tablet.  Albeit one without an actual touch screen. That would be totally cool, but impractical at this time.

Everything in the OS works as it should. EFO have created solid drivers for their hardware and added nice options like being about to output sound through your TV or sound can be directed back to the RF remote to play on it’s tiny speaker or through a headphone jack.  The RF remote also supports a microphone for voice commands over your MiniTV.

There are some minor changes/additions to the interface. The status bar at the bottom now includes volume controls and a power/suspend button.

Device support isn’t bad either – they support keyboards, mice, USB hubs, USB memory sticks and even webcams. Use Skype for video conferencing on a stick. 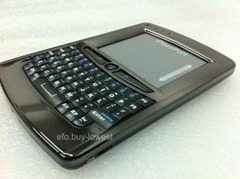 The only real weakness is the mini-keyboard/glidepad supplied. Mostly because these are not to my liking. I would prefer something more like a standard remote control with the added headphone and microphone jack. However since the keyboard is interfaced via the USB port all I had to do was swap the RF dongle with one for a standard RF mouse (Logitech in my case although it also worked with a Bluetooth dongle/mouse I tried as well).  The mouse was far better for me. A nice simple input that easily let me control everything.

This is really a cool device. Hackers have already been loading Ubuntu Linux on them, but a full Android ICS release with Google Play store access is far better in my opinion. The price is also a steal. $69.99 for the Mini-TV stick and keyboard with all needed cables!