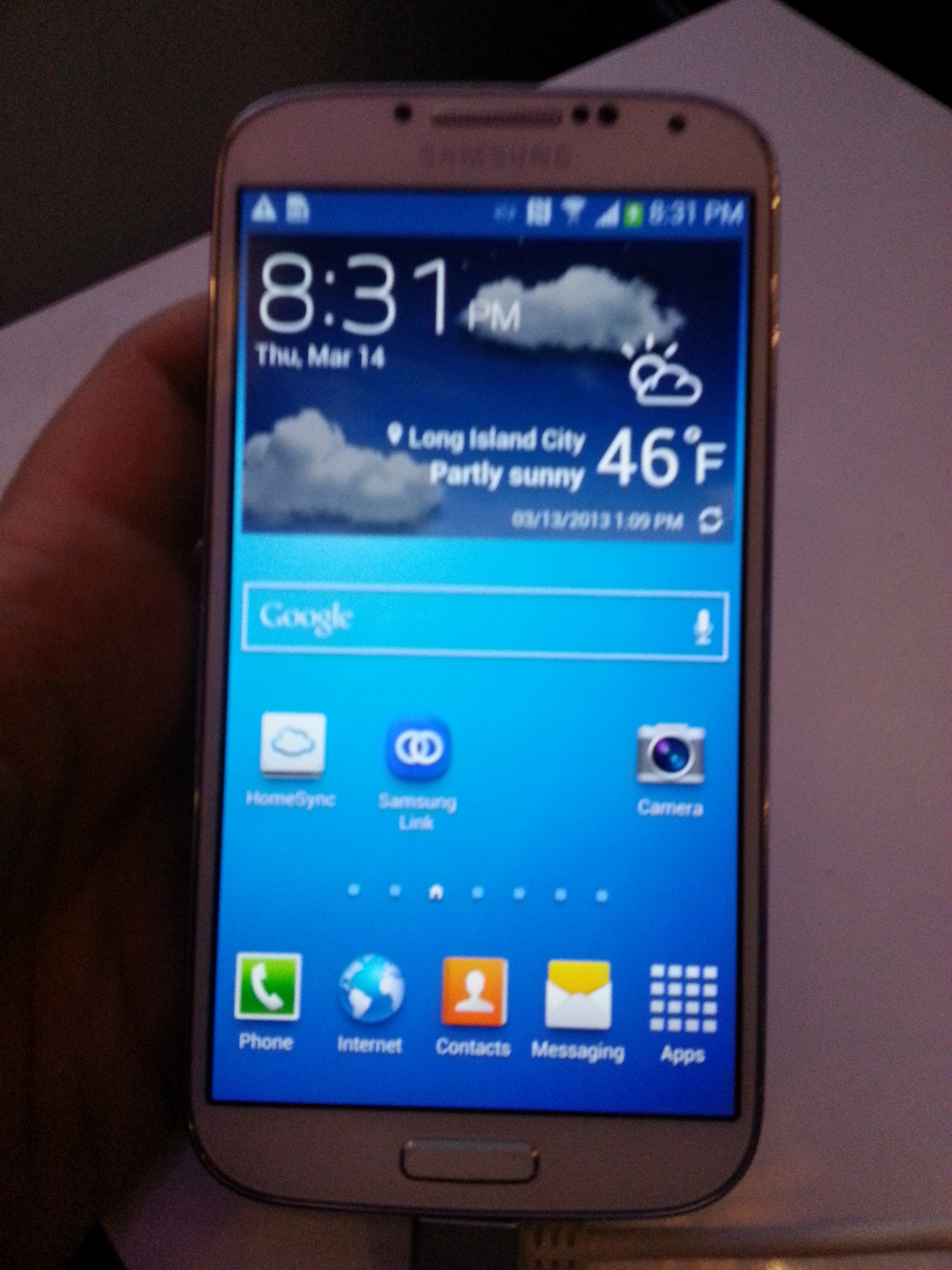 Tonight was quite the unveiling! I’ve been to several Samsung events and they seem to just get bigger and more spectacular. I have no idea how they are going to top this one. We headed to Rockefeller Center and then down the street to Radio City Music Hall. Those of us in the “media” were waiting outside clogging up the sidewalks until they let us in. What a mob!

Once inside we were greeted with liquid refreshments and the historical stage with lit up with the Unpacked logo flying about waiting for the main floor show.

Once we were all in our seats we did get a full orchestra and actors, dancers and stories. We got the Full Treatment. I was quite entertained. The main point was that Samsung designed this phone to be a companion to the customer. Physically interacting with the user in a more natural fashion and offering features that solve real world problems. For years smart phones do much more than just let you make calls. The Samsung S 4 becomes an indispensably secretary and digital companion. The entire Radio City Music Hall show demonstrated each of these features in a series of skits.

After the show we were able to see some of the Samsung S 4’s in person. This wasn’t easy as the place was mobbed and it seemed as if everyone was trying to get to the exhibited phones. Anyway, when I did steal a moment to check out the S 4 I was impressed by the speed and fast responsiveness. It’s smaller than the Samsung Note2 but close to the Samsung S lll. I even checked out the the new Notification list. Even with way too short a time to properly examine this it appears that the Settings have been reorganized to be easier to navigate. From this screen I could go directly to any feature for further editing and tweeking by tapping on the button.

And the Dual Camera mode. This where you can have both the back and front cameras captured on screen simultaneously. This works in both still and video. Very impressive. The main camera is giant 13 megapixels (WOW!) and the front facing camera is a decent 2 megapixels. You can alter the shape of the “postage stamp” thumbnail of the alternate camera image (heart shaped, round, etc.). This feature is definitely something that needs lots of time to play with. It’s a fantastic development because it makes everyone involved – those viewed and the viewer be all included in the action photographed.

This phone comes with Bluetooth 4.0 and IR LED for remote control of other devices like your TV. IR is generally found on tablets. I wish I had time to play with the adding audio to a still image. That sounds quite interesting! Not to mention the Drama Shots which can take multiple shots in seconds and then composite them all together. I love the translation feature. This works with about 10 languages right now and that’s probably enough for most travelers but this is the future. Once again Star Trek has shown the way – We now have the Universal Translator in 2013. It works from Text to Speech and Speech to Text so it’s not Quite trekkie-like, but it can work well enough to find your way around a new city.

The Samsung S 4 has Airview using only your finger. This feature was previously only available on the Note2 with it’s S Pen. This I was able to test out and yes, hovering at just the right distance over a picture in the Gallery will pop up a larger thumbnail, however when your finger gets too close the whole picture pops into view. Swiping the edge of your palm across the screen Will move from one image to another but, yes, you have to practice a bit to learn where the sensor is to trigger it. It doesn’t take long, however. It just isn’t hard to do. The phone is supposed to be “glove friendly”. I didn’t get to test that with a glove on but if it’s using the sensor sensitivity then it should work the way I was already using it.

I’m also intrigued by S Health which can use accessories such as S band to monitor vitals and keep track of your body statistics for examination. There’s also sensors to measure Temperature and Humidity. So, now this phone is becoming the Star Trek Tri-quarter!

There are other features like Home Sync which one connects to a one terabyte device. Here you share your media with other devices and your family. Story Album reorganizes your photos by the location of a series of images or the same date they were taken. Add a cover image plus easy Uploading to social services like Facebook and one sees how clever and useful this feature is. S Voice Drive connects to your car via Bluetooth and helps you navigate around town. This includes hands-free phone calls and responding to messages while you drive, keeping everyone safe on the road. The KNOX feature keeps the business information on your phone separate from your personal data. This keeps your data secure and safe.

Samsung is determined to keep advancing their product and this is another in a great line. How will they top this??

some extra pictures around and in the Event: