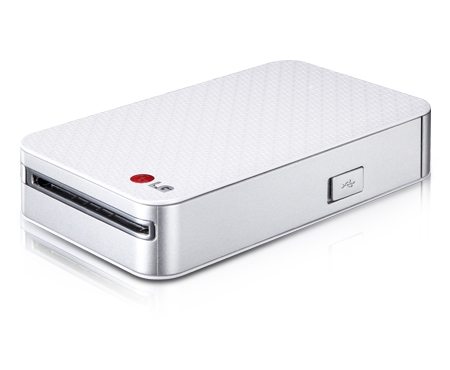 While I was at the LG G2 Event they were giving out the LG Pocket Photo device. And while I don’t have an LG phone (at least at the moment) I do have a Samsung S4, so I figured I’d test out this nifty little printer with that the S4. After all, I just had to download the app LG Pocket Photo to use the printer with any android smart phone.

The Pocket Photo printer reminds me of a Polaroid camera of my youth. Take a picture and watch your photo spits out the bottom of the camera in a few moments. The difference is that the LG Pocket Photo can communicate with almost any Android phone capable of NFC and Bluetooth and any iPhone that can use Bluetooth. That means it’s compatible with Android version 2.2 (Froyo) and above plus iOS version 5.1 and above.

QR codes have been conveniently placed on the printer box and the Manuel so iPhone and Android owners can download their respective apps immediately.

The LG Pocket Photo is slightly bigger than most Android phones and thicker, of course. (120.9 x 72.4 x 24.0 mm) It comes in pink, silver, and orange. It’s quite adorable actually. It’s not made for “serious” printing jobs but rather fun and convenient ways to share information. And that’s because you can add more than just a photo!

After starting up the app you can look over your albums to choose a picture or take a picture on the spot. You can zoom in and move any part of the original photo around to exactly where you want it within the Printing Frame.  The photo I took of my Astronaut Barbie is much larger but I picked the part I wanted to use for this experiment. I moved it just where I wanted it. You can also rotate the image. It’s easy as pie.

Below is a screengrab of the app as I choose among the filters. Aside from the standard “sharpen”, “saturation” and so on there’s some others like “sketch” (that’s the one shown here), “paper”, “rainbow” and so on.

I’ve added a decorative frame. Most are of the usual theme like graduation, birthday, invitation, thanks and so on. If you are at a gathering you can commemorate it using this printer. Take a photo of some of the folks, add a frame and some contact info. Voila! Pass around your ersatz business card.

If there’s an important Event coming up here’s one easy way to remind people. Access the settings for a “d-day” sticker. It shows how many days from Now that the event will occur. In this case it’s 215 days from my Grandfather’s birthday.

And here you see the “D-215” added. And where you see it says “hello pocket”, that’s called a “memo”. You can add any phrase in a variety of colors and even the date.

There’s a variety of alternative combinations for making copies on the one small sheet of ZINK paper.
Pick the one that makes sense for you. After it prints just cut it up and hand them out.

QR codes can be added – includes phone number, email address, name, a video.
or upload an already existing code to paste onto the photo

Here’s the added QR code. (Printed version on the left, App seen on the right)
Yes, the printed version has a bit more yellow than the on screen view but it’s fairly close.
And reading the QR code from the printed card works very well in several Apps that I tried them in.

When you’re ready to print just tap the little printer icon and depending on what you chose in your settings either the NFC or Bluetooth will send the data to the printer. Each print is a 2×3-inch photo. That’s just slightly smaller than your basic business card.

Each Zink package has one “smart sheet” and ten Zink photo papers. You place all of them in the printer with the “smart sheet” on the bottom. The LG Pocket Photo printer heats up the dye crystals that are embedded inside the Zink paper. This transforms a change in colors accordingly to the information within the photo.
Here the printer is spitting out the Zink “smart sheet” before it prints my first photo. It appears that you only need to include this “smart sheet” once for every 10 zink sheets. Although if you are experiencing printing problems, I’d hold onto the sheet Just In Case.

While designing your “photo” you can upload/share it to whatever community or app (like dropbox) you happen to be connected to. I sent this one to picasa. But included in the list is email, S Memo, Skype, G+ Hangouts, Group Play, Drive, Bluetooth, etc.

This Pocket Printer is So easy to operate. And that’s a good thing because if you are walking around with this printer In Your Pocket and whip it out for a quicky it better be easy. The LG Pocket Photo comes with the normal USB cable and AC adapter to charge the battery. One charge should let you print about 25 photos so unless you are planning to go crazy you can carry just the printer (in your pocket). The settings let you decide when the printer turns itself off when not in use so it doesn’t waste it’s energy. This is a great way to customize special business cards for certain events or special people.