Each time this Korean tech leviathan has produced a masterpiece, it has always managed to capture the imagination of the public but after the sober performance of the Galaxy S4, it was imperative to pump out a successor quickly to overcome the immense disappointment. Thankfully, Samsung has managed to offer just enough to regain its title as the, “Revolutionary of the smartphone industry”.

Unlike the Galaxy S4, similar in form and size to its predecessor, the S5 gives every impression of being a better built, sleeker looking and sexier superphone of 2014. A bright and big screen, splendid camera quality and loads of features make it distinct and cutting edge.

Let’s take a quick look at what the Galaxy S5 brings to the table. Note that some of the features may vary depending on the region of purchase.

Either you love Samsung’s design or hate it. Fact is the Galaxy S5 continues on the design DNA perfected by Samsung and, hence do not expect much of a change here. One glance at the S5 and you know that it is Samsung proprietary. One change though noticeable in the styling includes the plastic back with a dimpled polycarbonate finish. It is still a removable back cover that can be exchanged for after-market styling. Thankfully though, the S5 significantly reduces the use of plastic overall and hence it feels a little less brittle. The S5 boasts of a three line chrome bezel that adds a distinct feel to it and with the micro-USB port having its own chrome flap.

According to Samsung, the S5 was designed to retain the patented style of the Galaxy series while ensuring its water resistant claims and this is why no interface is left exposed.

What more can you ask from a superphone of 2014? A large impressive screen of 5.1 inches, Super AMOLED Full HD display and a superior clarity even under sunlight – that’s what you get with the Samsung Galaxy S5. While only slightly bigger in screen size from the S4, it does help having Super AMOLED display for greater angular viewing and sharper crisper images.

Even though the full HD resolution of the S5 offers 432ppi, it is astonishing to note that the S4 had a 441ppi depth. Nevertheless, when compared side-by-side, the S5’s AMOLED display with Full HD leaves a lasting impression, which the S4 even under the best lighting conditions fails to match. Colors are so much brighter than before and vibrant – one can in fact notice subtle color differences under bright sunlight!

The Samsung Galaxy S5 continues to boast of the dynamic brightness and display setting mode that automatically adapts the screen color, vibrancy and brightness with contrast to ensure proper viewing under all conditions. Be it sunlight, home viewing or dim light – never again squint your eyes. The only phone that beats the S5 in terms of screen clarity is the LG G2 with its larger screen and better contrast in a smaller body. Nevertheless, the S5 is an absolute stunner.

Always known for their responsive cameras, Samsung has yet another surprise with the S5. The auto-focus on the 16 MP back camera is the fastest that we have yet seen. Unlike other smartphones where you need to wait at least a second or so before capturing a perfect snapshot, the S5 manages to grasp moving subjects in a matter of milliseconds with perfect focus. Add to this the selective focus allowing you to blur the background or foreground as you please for added effects. Such kind of responsiveness and performance is usually anticipated from a DSLR but never a camera phone. Although a few frames do come out lacking in clarity, the overall performance of the S5 is at par with that seen in the iPhone 5S and at times it seems more vivid and crisper. 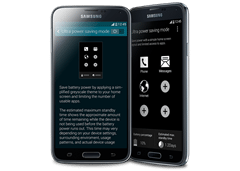 While the battery is a sober 2800mAh, lower than competing superphones of 2014, the Ultra Power Saving mode is a new inclusion. You can turn this feature on at any time regardless of battery power and the moment it switches on the phone extends battery life by at least 3 to 4 times. How does it manage to achieve such impressive results with just 2800mAh? Naturally, expect some loss in performance and usability. The OS is stripped down with only the bare essentials running in the background. Add to this the fact that you can only get a few of the essential apps operating leading you to belive that the S5 is an inferior phone on Ultra Power Saving mode. The truth however is that sometimes having the ability to extend use of the phone is more important than having full access to its apps and features. For example when away on a hike or camping trip it is better to have some battery left after the trip rather than having full access to the phone. Without the Ultra Power Saving mode though, expect no more than 12 hours of average usage.

One more thing, unlike the new generation of smartphones from HTC and others, Samsung continues to offer a swappable battery with the S5. We are fans of phones with removable batteries as we believe this helps prolong the life of a smartphone by a couple of years because the very first thing to lose its vitality is the battery. In fact, this is our biggest complaint with the HTC One M8!

Quite frankly, the Galaxy S5 is the first Samsung phone to boast a truly user friendly interface of the Android. TouchWiz on the S5 is less clustered and more responsive than ever before. Addressing the concerns of waning Samsung proponents about the TouchWiz’s propensity to hog system resources, Samsung has managed to strip down the hardware intensive nature of its interface while retaining the same usability as before.

While not as well crafted as the iOS, the S5 with its Google Edition of the KitKat is nothing short of true brilliance. The tweaked icons provide a refreshing and simple look with a cleaner appearance and the elimination of bloatware, extra apps from the factory version helps enhance the performance of the S5 straight out of the box.

The greatest interface addition is “My Magazine”, which is quite similar to the BlinkFeed of HTC although Samsung’s offering is powered by Flipboard. It provides calendar appointments, particular RSS feeds and morning news. My Magazine is less intrusive and sweeter to use while having the ability to shutdown from the settings.

Unfortunately, even with all these user enhancements, the Samsung S5 does tend to leave a slightly overwhelming feeling in our gut. The settings are over stocked with options and learning what each one does takes a little getting used to. Thankfully, all gesture controls feature plenty of options and are tucked away in a single section.

Let’s now take a look at the brand new innovations featured in the Samsung Galaxy S5.

Maybe it is the 801 2.5 GHz Quad core processor from Snapdragon or the TouchWiz tweaks, the Samsung Galaxy S5 manages to improve on the overall performance significantly compared to its predecessors. While the S4 left a lot to desire considering the hardware improvements over the S3, the S5 however brings out the raw power present under the hood.

The home screen and TouchWiz interface is fluent and smooth such that playing games and multitasking doesn’t create any lag. In fact, we believe that its fluidity is comparable to the HTC One M8. When a phone can playback a 4K video while running Facebook in multiple windows without any lag, it is safe to say that the performance is top notch. Alarmingly though, when benchmark tests are performed, the Galaxy S5 doesn’t top it all and in fact it scores less than the LG G2, Z Ultra and even the Note 3. Then again, benchmarks don’t always show the reality of performance on a day-to-day basis.

Coming to the connectivity, the Samsung S5 has the best hardware possible. In benchmark tests, it scores an amazing 779.0m/s which is right at the top of its competitors. This basically means that you will experience blazing fast speeds on the S5 as opposed to any other phone regardless of the network or signal strength. In fact, with a 4G sim, the Galaxy S5 couples together both the 4G network connection and Wi-Fi to boost overall download speeds. We aren’t sure of any other smartphone in the market that manages to do this successfully and without failing downloads even once!

Unlike the S4, the Galaxy S5 provides plenty of things to brag about. A superb camera, impressive and immersive Full HD screen, multi-window functionality with blazing fast speeds and a fingerprint scanner are just a few to be proud of. However, we feel it is the tweaked interface and faster performance of the phone that deserves all the applause. We are a total fan of the Samsung Galaxy design and believe maintaining it in the S5 will help Samsung build a cult following and while it doesn’t match head to head with the HTC One M8 in a few areas, it is stylish, sleek and a joy to use.

True innovations come from inspirations and improvements that no one else notices. Samsung has brought in a new design that looks great, feels awesome and cuts down the flab around the corners without sacrificing on performance. A better screen, improved battery life, superior fitness apps and features coupled with a stunning camera performance leave no doubt in our minds that this is the best phone from Samsung till now!