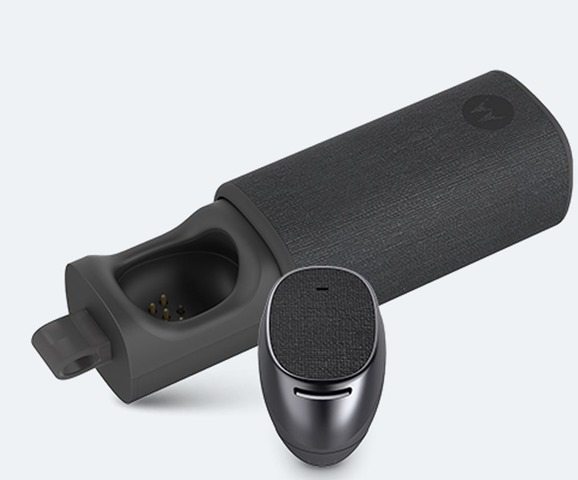 Talk Time4 Moto Hint: up to 3.3 hours Moto Hint and Charging Case: up to 10 hours 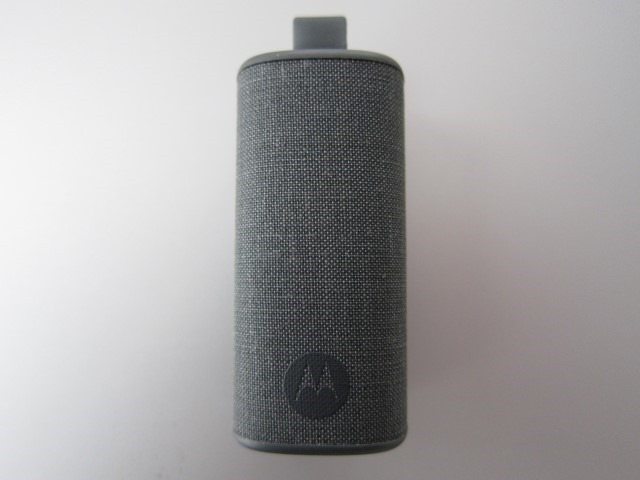 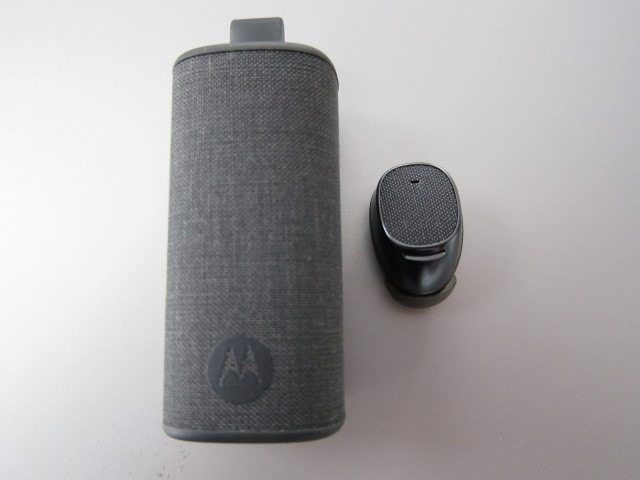 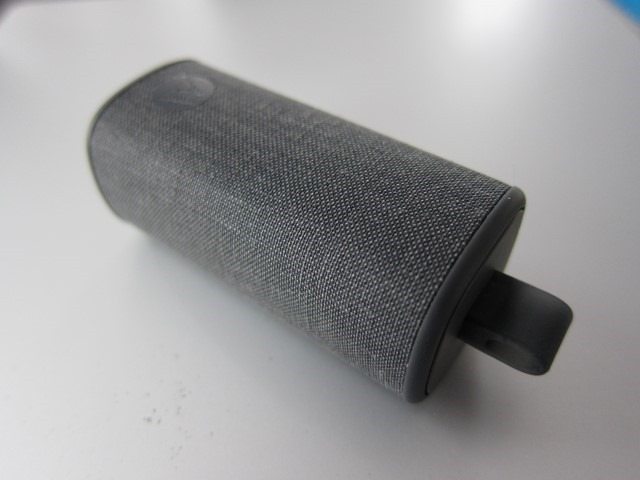 The Hint is at its core, still firmly a Bluetooth headset that connects to your devices using Bluetooth 3.0 + EDR. But what separates it from other more traditional headset, is it diminutive dimensions, capacitive touch enabled controls, its “smart” functionality and futuristic looking charging case.

The Hint is marketed as a “smart” headset, basically a combination of various features, like IR sensors which automatically connect the headset when you put in your ear and turns off when you take out, voice controls to answer or ignore calls, its voice alerts that announces things like how much battery life is left when you put it on or that it’s in pairing mode/connected, its voice menu with prompts to enable or disable certain features without the use of  an app/display and its integration with Motorola’s own Google Now-like “Moto Voice”. Tapping the capacitive button also activate Google Now and on iOS it uses Siri. Generally, a device is considered “smart” when it can connect interactively and autonomously work (with other devices). Artificial Intelligence and the ability to change how a device works (with apps) can also be added to the list. In this sense the Hint can be considered “smart” due to its ability to freely perform certain features (like automatically connecting and disconnecting) and interaction with the user via voice controls (declining calls.) I love the fact the Motorola decided to keep things simple and go with a “voice menu” instead of having another app to install to customize it features. This is done by holding the Call/Voice Touch button for about 8 seconds. The headset will to start go through all the available options and whether they are enabled or disabled. A quick touch on the button will either disable or enable that feature. Brilliant and simple. 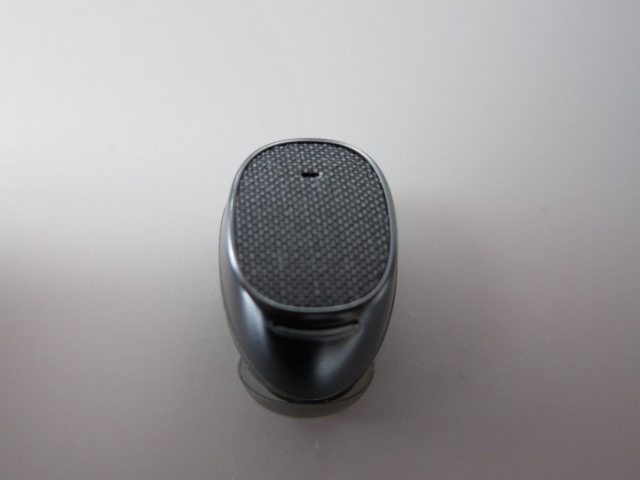 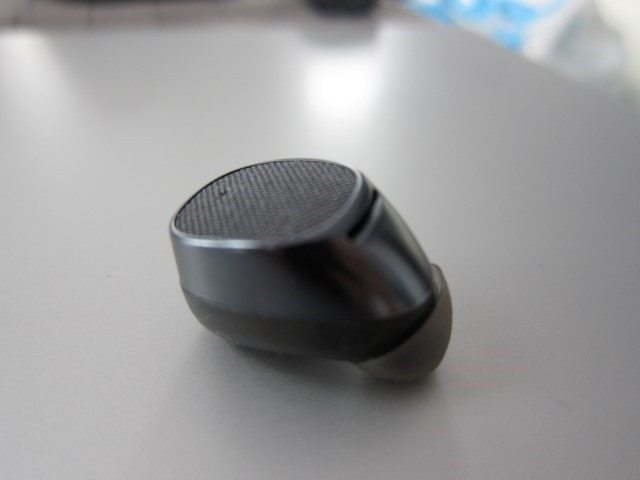 Design-wise it’s tiny, probably the smallest headset I’ve ever seen, leading some to believe that it’s a hearing aid, rather than a headset. Its tear drop shape and incredibly light weight make it comfortable for long calls. While this is one of its strongest characteristics, it’s also one of its weaker points as it also makes it much easier to drop. And indeed the headset is so small that on several occasions I’ve almost dropped it. It also doesn’t help that certain material used are quite a bit slippery. 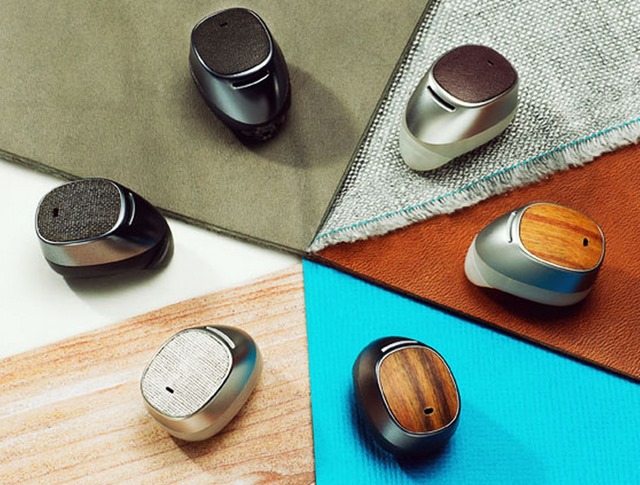 The Hint comes in several colors: Dark canvas, light canvas, which are both some kind of a cloth material, walnut, bamboo, brown and black leather. The charging case itself comes in either dark or light canvas, the same cloth-like material found on some models, but we would have liked to see matching leather, walnut and bamboo charging cases. Worth noting, is that only the small touch capacitive surface is done using the materials mentioned above. Integrated into the touch enabled  are is where you’ll find one of the two built-in mics. The rest of the headset remains unchanged no matter which material you go for, except for the color. 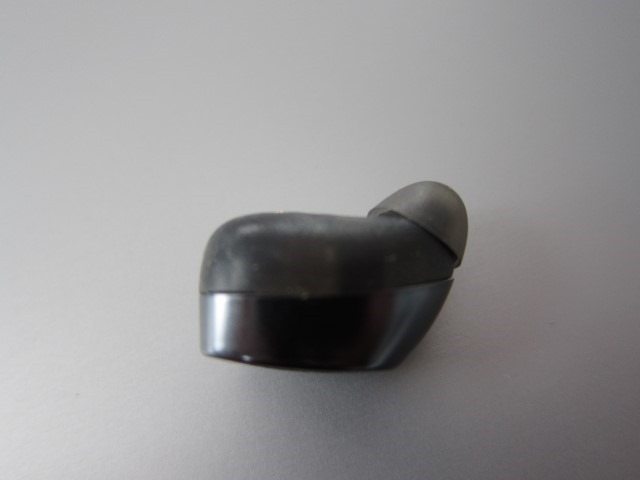 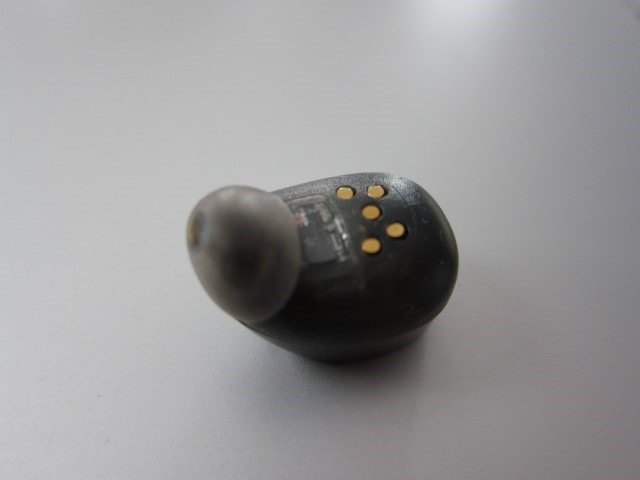 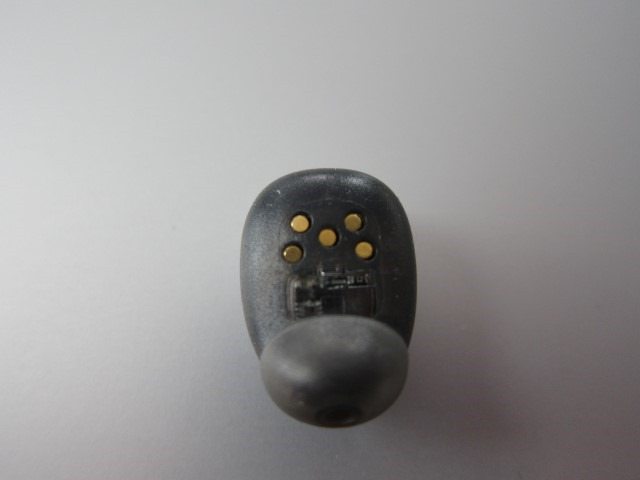 Below the touch capacitive surface, a very slippery metal is used, while the rest of the headset uses a sticky rubbery gel-like material. The second mic can be found on this metal section. The headset uses a removable tip and comes with 3 tip sizes. Luckily these are removable and washable, but the rubbery gel-like material is not. To make matters even worse, this area collects dust and dirt, will require frequent cleaning and simply isn’t as durable. While it’s understandable that Motorola chose this material for the added grip, it’s much less easier to clean.  Grip should have been achieved by making changes to the overall shape, all while going for an easier to clean material like polyurethane. Below the headset you can find the 5 charging contacts that allows it to charge once inside in the cradle. 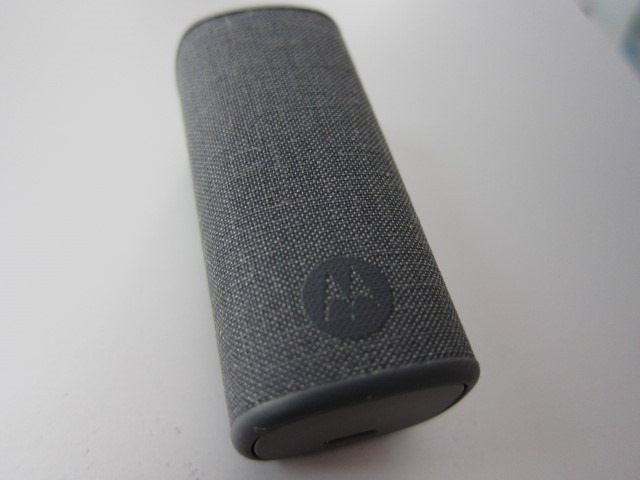 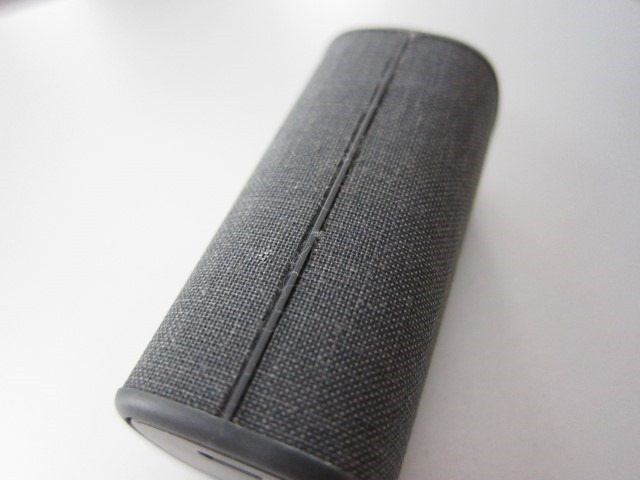 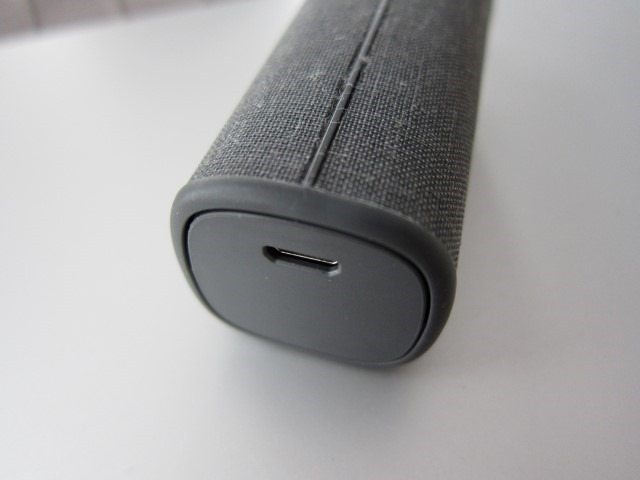 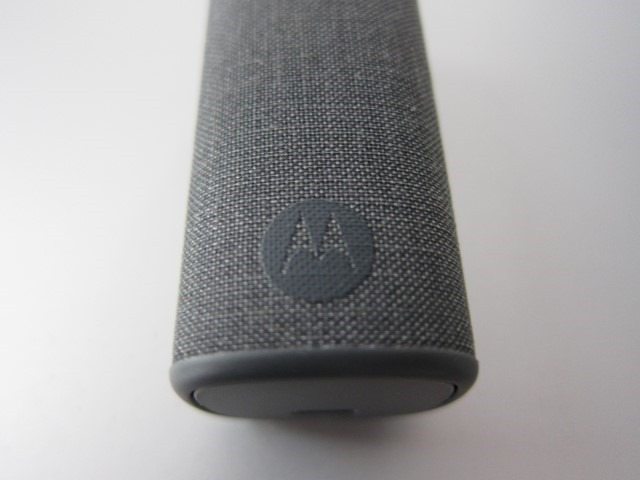 The cradle is this small cylinder that has a slide-out part where the Hint can be placed. What makes the case special is the inclusion of built-in a rechargeable battery that can charge the Hint when it’s inside case.  Slide the drawer back in with the Hint in place and the integrated loop has a built-in white light that slowly starts to pulse, indicating that the headset is charging. The idea is simple and yet effective, allowing the headset which admittedly has a lower talk time of about 3.3 hours to be extended by up to 10 hours or about 3 full charges from the cases. The case itself is small enough to easily be taken with you. While you can keep it in your ear, dropping in the case also means always having a fully charged hint, obviously on the condition that the case has enough charge.  On the bottom of the case there’s a microUSB port through which it can be charged. By the moving the charging connection and duties, the Hint can be made as small as possible, lacking any microUSB ports where dirt can accumulate. Motorola has included a microUSB cable, but no charger which is something you’d expect from a $130 headset. 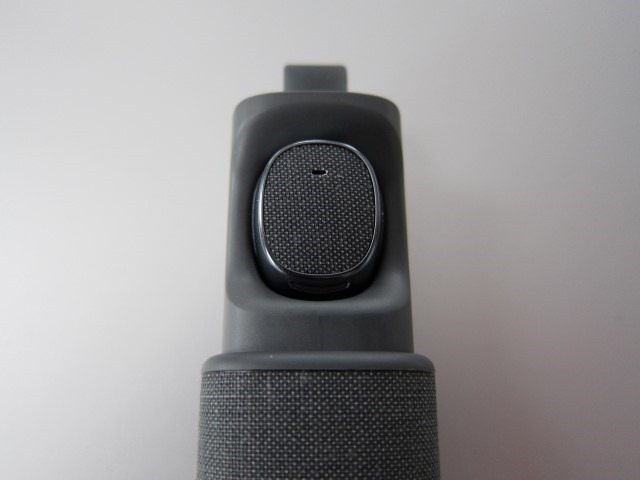 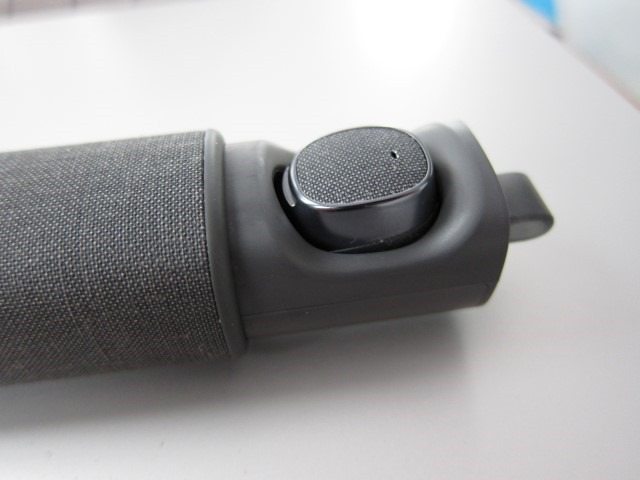 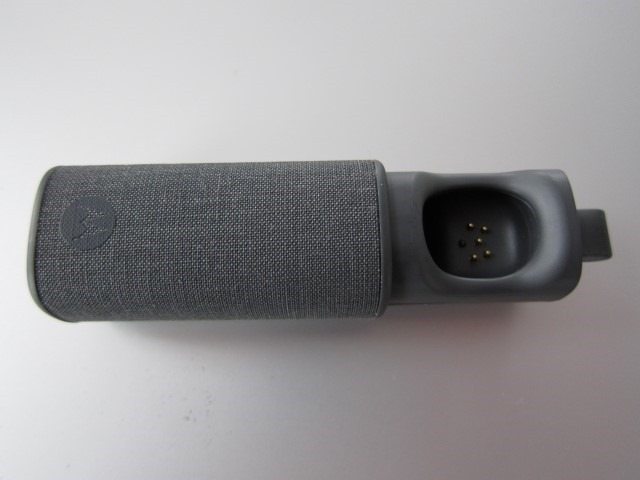 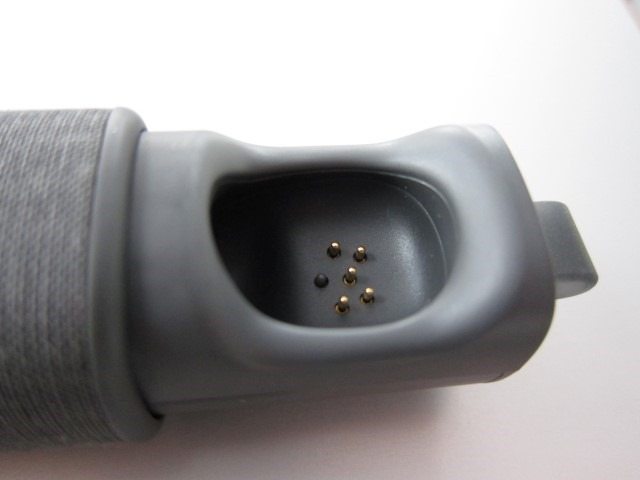 The system can be charged by charging the case separately and later on charging the headset by placing it in the case. It’s also possible to charge both at the same by placing the headset inside the case while charging the case. In both cases, the integrated loop will slowly pulse a white light to indicate charging. In both cases the light will light up a solid white to indicate that, depending on the case, whether the case is fully charged or that both are fully charged. The headset will also briefly flash a white light when being a removed from the case to indicate that it has enough charge. The entire system could have been done without all these flashing light, but I’m happy they did. It just adds a level of sophistication and elegance to the entire system and it simply looks good. There’s something special about seeing the case on your desk with its pulsing white light. 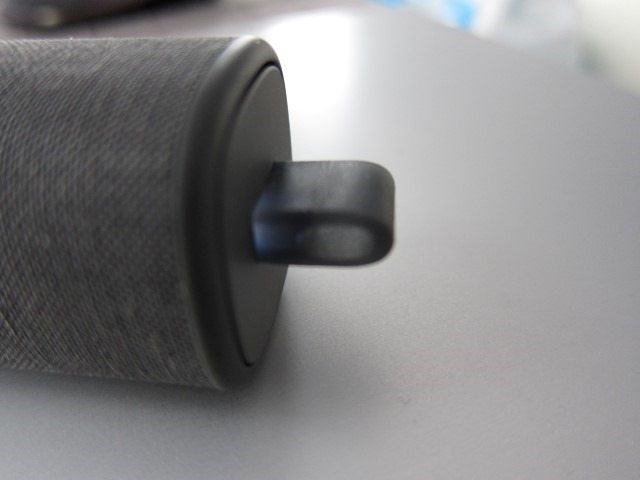 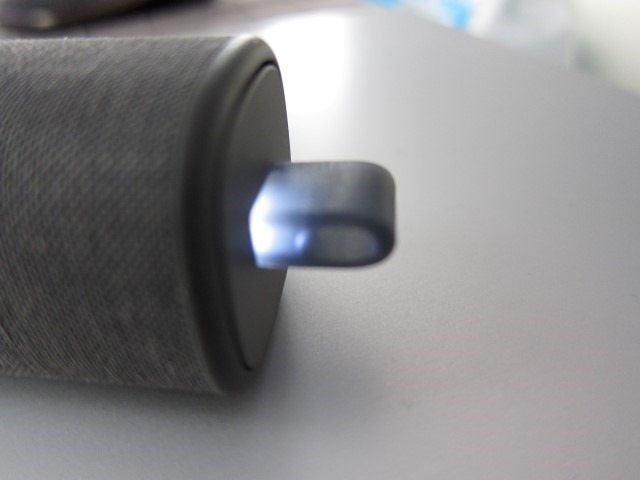 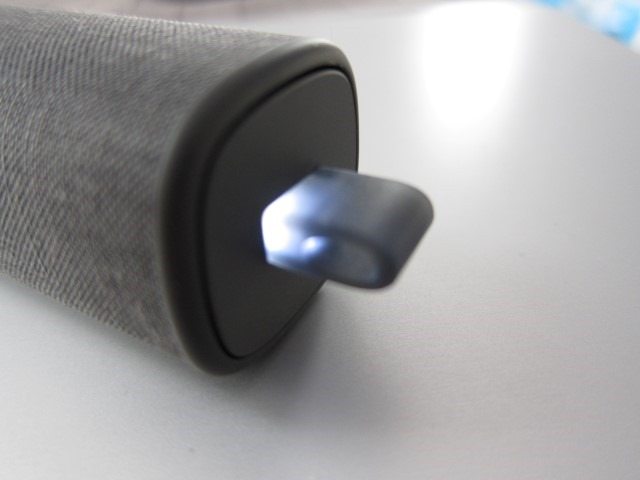 Seeing the tiny Moto Hint for the first, I didn’t expect much in terms of audio quality, volume and range. But surprisingly, audio quality was excellent, with lots of volume and voices being convincingly reproduced. Only larger headsets several times the size of the Hint, like the Jabra Motion and the Plantronics Voyager sounded better, besting it in added bass, but that’s a very small detail for such huge difference in size. Other than this, it’s surprising that something so small can even come close to headsets of this size. Expecting to raise the volume close to the max, I actually had to lower the volume as the tiny headset had plenty of volume on tap. Callers reported my voice sounding excellent with background, wind and echo being canceled out. Motorola does offer the option to turn off noise cancelation through a pass through audio mode that allows ambient sound to be played through headset, but will reduce battery life in the process. The Bluetooth range was good, but nothing special, slightly above what you’d expect from most headsets. 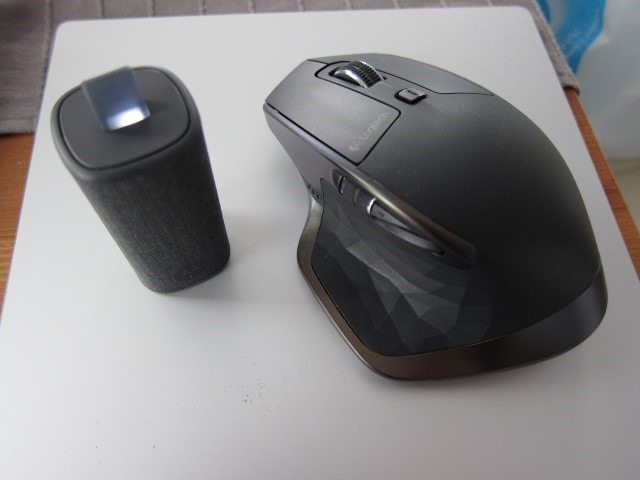 The Hint has everything I want from a headset, small, great audio quality and when paired with the case, great battery life. It’s smart features are a nice bonus too. On the other it’s so small that you can easily drop it or loose it, they should have included a charger the gel-like material isn’t the best choice, but all of this doesn’t stop the Moto Hint from being the best Bluetooth headset currently available. As a result it get 10 out of 10.

The case is stylish and portable and can charge the headset 3 times.

Long battery life with case for such a small headset