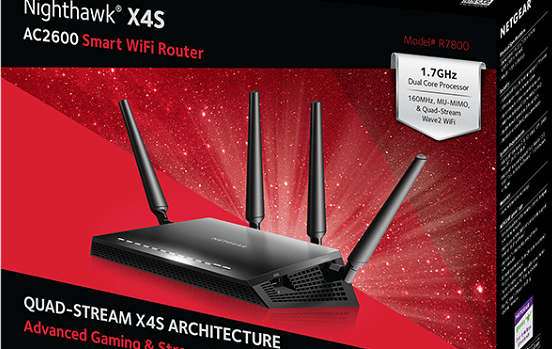 Sometimes when we do a review, it’s value oriented; sometimes, It’s just something quirky and new.  This is not one of those times.

This is a review of Netgear’s monstrously over-powered router, a Nitrus oxide charged workhorse of a router that is designed to be the backbone of any modern home-network. The Nighthawk X4S hits a grand-slam with the router interface, has the horsepower, and performs solidly over long periods of time. Before tearing into the meat of the review, it has to be stated (regardless of the packaging) that this thing is not just some toy. At the end of the day, the Nighthawk X4S compares to the Ram Express pickup, or the Chevy Z71 pickup, they look like toys but they’re still trucks that are designed, in principal, to perform a job. In much the same way, Netgear’s Nighthawk series of WiFi routers may appear to be detached from some over-sized Gundam model, but it is a serious router that does it’s job day after day, hour after hour. Routers are usually operating hidden from view, and when we have to make some adjustment to the network, it’s the interface provided on our PC’s instead of the slick market-researched plastic box.

[zee_container class=”turquoise” id=”dcboxcontent”]The Nighthawk X4S is a dual band wireless router, which means it supports both legacy 2.4GHz networks and the newer 5GHz networks. This feature is especially important in offices and apartments where multiple wireless networks, or even cordless phones, may create “background noise.” Always use 5GHz networks if your devices are capable of it.  This Router allows both bands to be utilized at the same time.[/zee_container]

The Nighthawk X4S uses the tried and true browser interface (Also available is the Netgear Genie App), and why shouldn’t it? A web-browser interface is standard for a reason, it just works. In fact, I believe that the whole interface is about getting the usability down to the featurelist. We’ve all dealt with many routers over the years, wired and wireless, where the designer tried to over-simplify the interface for a four-year-old. You know, the interfaces that are so simplified that if forces the owner/user to replace the OEM with something they found at GitHub. I’m happy to report that the included interface with the AC2600 Nighthawk X45 is solid, with no pretense of a Fisher-Price dashboard. Although, that Netgear Genie App is great with a list of features of it’s own; including it’s own unique interface.

ReadyShare: Connect a USB device to one of the two provided ports, and have access to the files as a network drive.  There are two ports provided with the AC2600 model, and connection is automatic.  You can change the “Share Name” from the routerlogin.net interface, set read/write access, and are provided with a “Safely Remove USB Device” button. Even a standard ROKU player’s built in media player can find photos, music, and videos on your network device, provided they are in the correct format.

What they do for the not-so technically inclined is a set up that can be likened to a guided tour. This leaves more time for those 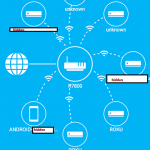 important questions about set-up, like “what was the password I wanted to use again?” Once it’s up and running the first time, the owner can all but forget about the router.  Still, like the truck comparison, what’s the point if you don’t haul or tow something? If you don’t set up ReadySHARE, let alone WiFi printing or your own FTP repository, you’ll be missing out on some really cool features.  Each of the other features are easy to control via the routerlogin.net interface (or NETGEAR genie); because, a good control panel is needed when you have the this much power.

[zee_container class=”turquoise” id=”dcboxcontent”]NETGEAR genie: An app for both iPhone and Android that allows for management of your home network.  This is free from the appstore(s).[/zee_container]

At 1.7 GHz, dual core, Netgear’s Nighthawk X4S AC2600 is simply beast-mode.  With four high-performance external antennas, this thing looks as if it belongs on a sci-fi movie set or removed from some Gundam model kit, but those antennas have a logic behind them — allowing for better connectivity with it’s built in “Quad Stream Technology.  (That means those antennas aren’t there for their looks, they have a logical connection inside the router itself.) I’ve mentioned “Beastmode” a time or two; well, I don’t mean the processing power, though it does have plent. I am referring to “Beamforming,” a related technology to the multiple inputs and outputs for wireless networking (see sidebar). In practical terms, even with slower internet speeds this router can stream videos from NetFlix and the network drive simultaneously while allowing a no-lag gaming environment.

Beamforming: the term given to Spatial Filtering, that applies specifically to directional signal transmission.  What this does is to determine the directions between two devices to intensify the signals between them.  This in effect creates a better signal connection between the two devices.

Speaking of performing well over a period of time, the device, Nighthawk X4S AC2600, has not even had a hiccup in the months that we utilized this under test conditions. I have almost always come up with at least a couple of negatives when writing reviews. I hate surprises, so attempts are made to find anything that could be an annoyance to a user.  In the end, I have failed to make this device not perform. I can’t really find a way to expand this section without lighting the device on fire, physically hitting it with a hammer, or some other nonsense.  It has worked flawlessly, and each time I thought it was a problem it was my ISP instead.  The Nighthawk by Netgear is just a solid device.

[zee_container class=”turquoise” id=”dcboxcontent”]Beastmode: Not technical at all, it is actually a term used in gaming to signify that something is of the greatest power available in a given game. In other words, the Nighthawk series of routers by Netgear is about as good as it can get with current technology for home wireless routers. This reference is important because this router is of interest to the gaming communities.[/zee_container]

Considering it’s speed, the technologies involved, and how well suited it is for both streaming and gaming, it’s no wonder this thing comes with a larger than normal price-tag.  This is simply a higher end product, and has a price tag to match.  You would expect any WiFi router above the $200 mark to be impressive, and you would be correct.  This thing is very impressive, it can pump out 2600MB/s between both bands and has built in Dynamic QoS. No really, look this thing up on any reseller website.  The list of features on this thing is huge.  If you are in the market for a router, what you should really know about this device is that it delivers and that it does so consistently. The Nighthawk series of routers by Netgear are the very definition of beast.

Thanks to Wikipedia contributors for some of the definitions used in this review.