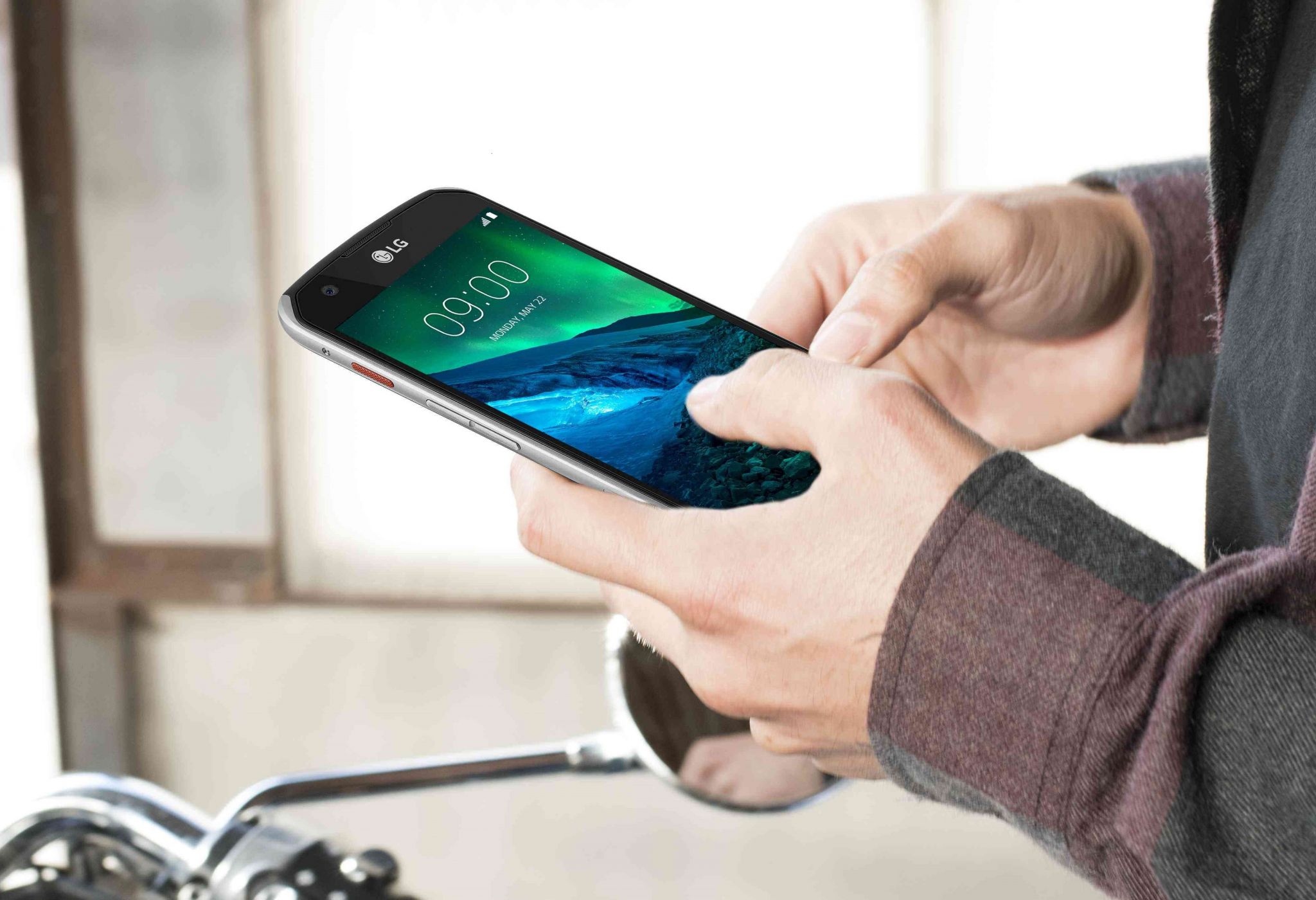 Durability in a stylish wrapper 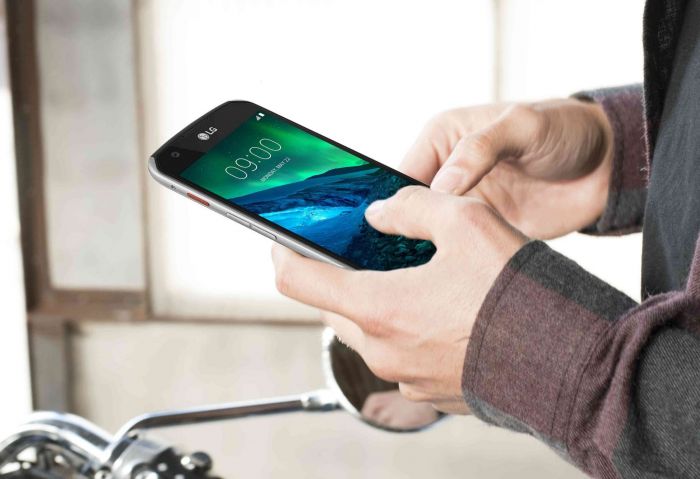 For some, phones are fashion items –  aesthetics winning out over functionality.  For others, phones are tools –  robust durability taking the day.

The LG X Venture walks the line between those worlds.  Its slim form and stylish steel bezels quietly disguise its rugged internals and solid steel frame.

While ruggedized phones have been around for years, they have often been bulky, ugly affairs that could easily be mistaken for last decade’s personal digital assistants.

The Venture has IP68 duѕt аnd wаtеr rеѕіѕtаnсе.  That’s the maximum level of dust resistance measured in the IP scale and the penultimate level of water ingress prevention.  The Venture also features MIL-STD 810G ѕhосk-рrооf tеѕt сеrtіfісаtіоn. The Venture nicely hides these strengths in a package that is only a handful of millimeters thicker than the latest premium smartphones.

Testing the rugged nature of a phone that’s designed to work in extremes isn’t easy.  Our typical plan with new phones is to place them in a case from the moment they’re received.  For the LG X Venture, we purposefully decided against encasing the phone in order to experience how well (or poorly) it could survive day-to-day hazards. 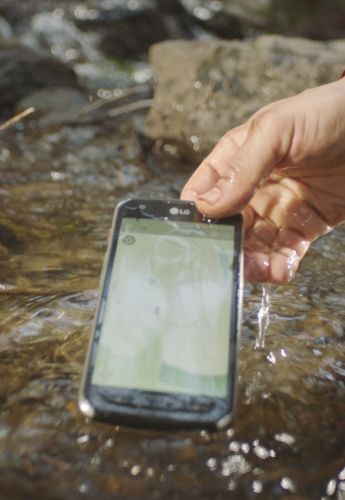 To test water resistance, we gave it a thorough dunking in a swimming pool while recording video.  As expected, the phone continued to function properly. It recorded both video and audio while under water.  The only evidence of the submerged swim being that the external speaker sounded wonky for a few minutes after its swim. After the water had shaken out, the audio returned to sounding just as it had prior to the dunking.  Since that time, the phone has shown no effect from water immersion.

We’ve taken the phone to the beach, to incredibly humid areas, and on long hikes.  We’ve let small children run around with it, perhaps one of the hardest test there are.

Prior ruggedized devices we’ve tested have implored users install stoppers and plugs in the charging and headphone jacks to prevent water incursion.  The LG X venture requires none of that.  It’s water and dust proof out of the box, no plugs necessary.

We feel drop test are best performed in highly controlled and absolutely repeatable environments.  Drop testing is also quite expensive.  For each of those reasons, GadgetNutz doesn’t typically subject phones to drop tests, but we made an exception in this case – albeit accidentally.

After taking a tumble of roughly 1.5 meters onto pavement and landing on one of the steel corners, the LG X Venture survived with complete functionality and a pristine screen.  Only when analyzed under magnification could a tiny scratch be seen on the corner of the stainless steel frame where the impact occurred.   While this was a highly un-scientific and anecdotal test, we feel the LG X Venture survived a drop that could easily have killed a lesser phone.

The LG X Venture doesn’t have a typical glass, metal, or plastic backing.  It features a grippy, black, textured, rubber-like back surface.  This makes the backing  appear so though might be removable, it’s not.   While the texture allows an easier grip on the phone, it’s also quite smooth so it’s best to take care when placing it on any surface that tilts. 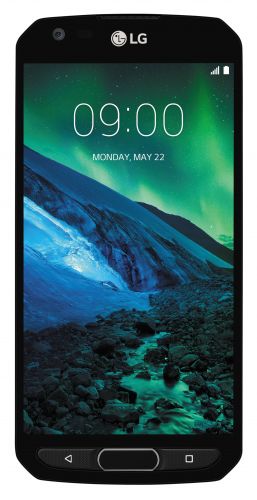 The front of the phone features traditional, physical home, back, and menu buttons.  The home button includes a fingerprint scanner.  We were impressed by the speed and functionality of the fingerprint sensor, though wish it were centered on the back of the phone like other LG models.  A long press on the hold button opens Google Assistant.

Standard 3.5mm headphone jack and micro-USB charging port are found on the bottom of the device, while the top of the devices is absent of any ports.  On the right side, there is only the power button.  The left side features a two volume buttons and the bright orange QuickButton.   The left side also has the smoothly recessed SIM card / Micro-SD card tray.  It requires a paperclip or sim-tray tool to open, and is protected against water and dust ingress like the rest of the phone.

The bright orange QuickButton may at first seem extraneous, but we’ve truly come to rely on its added functionality.

As shipped, a tap of the QuickButton launches LG’s Outdoor Essentials application.  This brings up quick access to weather, compass, flashlight, and step counters.  But what makes the QuickButton especially useful is that its actions can be fully and easily customized.  There are three ways in which the QuickButton can be activated, a single press, a double press, or a long press.  Each of those actions can be easily and quickly customized to launch any Android application.  Our favored customization is a single press to launch the camera, two presses to launch Maps, and a long press to bring up the flashlight.

Thе LG X Vеnturе іѕ rеlеаѕеd with Andrоіd 7.0 Nоugаt.  There have been suggestions that an Android Oreo update may be coming, but as yet no confirmation from LG.  Since receiving the unit, LG has sent a September 2017 security patch.  LG has committed to provide security updates for its Android devices.  Monthly updates like this are great to see, and frankly are a must have for modern Android devices.

LG UX 5.0+ іѕ іnсludеd.  It’s a rather heavy overlay on the Android ecosystem.  More experienced Android users will want to disable the simple user interface that ships out of the box.  Fortunately, it can be easily disabled in the system settings.

There are the usual assortment of carrier applications and pre-loaded apps from companies like Facebook and Amazon.  As is becoming more common, most of these apps can be disabled in the system settings if a user wishes.  After disabling a few of the built-in apps, the only applications using any appreciable memory were the necessary system services and the apps we installed ourselves.

We’ve found the camera to be more than capable of everyday photo duties.  Even though it lacks hardware-based active image stabilization, it does take respectable handheld night photos.  Included are a few unedited and un-retouched photos taken with the LG X Venture.  Some in bright daylight, some in overcast conditions, some are night shots taken under streetlights.

The night photos would certainly be sharper were they taken on a tripod or with the phone propped on a table.  They weren’t.  They were taken in a standard handheld fashion.  Due to this, have a certain artistic look.  The Venture’s cameras can’t compete with the night photo abilities of phones at three times its price, but it can capture great memories.  As with many photo tools, a good composition can make up for many qualitative differences.

One of the standout features of the X Venture is the massive, 4,100mAh battery.  No, the battery is not user replaceable, but try finding a modern phone whose battery is.  For us, this battery can power Google Maps at full brightness on the dashboard of a car for 10+ hours.  It almost never runs out of juice before the day is done, even with the heaviest of use.

While we’d prefer a USB type C charging port, USB micro-b is still by far the most popular charger and cable combination in the world.

The Venture’s processor is the Qualcomm Snapdragon™ 435.  We didn’t fell in any way hampered by the processor,  we would prefer this phone have 3GB+ of RAM rather than the included 2GB.  While there are few to no individual applications that make use of anywhere near 2GB of RAM, when running multiple large apps at once, the Venture will tend to unload the background apps more frequently than phones with greater RAM.

The LG X Venture is available in the US from AT&T for as little as $11 per month with 0% interest, or a one time purchase of $329.  Other offers are available.  https://www.att.com/cellphones/lg/x-venture.html#

Aftermarket phone cases that prevent drops, dust, and water ingress are large, bulky, and ugly.  Even with the best of protective cases, it often doesn’t make sense to take a super premium phone on an outdoor adventure or to a job site.  Raging rapids or heavy equipment can mean the end of any device.  The LG X Venture is a phone that caters to these markets, and does it with style.

It’s fast enough for most common Android tasks.  It has a capable camera, processor, and with micro-SD expansion, more storage than most could reasonably need.  The phone is every bit as dustproof, waterproof, and shockproof as any phone on the market and is offered at an affordable price.

We can recommend the LG X Venture to any who find themselves in the market for a durable phone and are tired of having to place them in cases that double the phone’s size.

Supports microSD card up to 2 TB**

* Actual time may vary depending on network connectivity and application use.