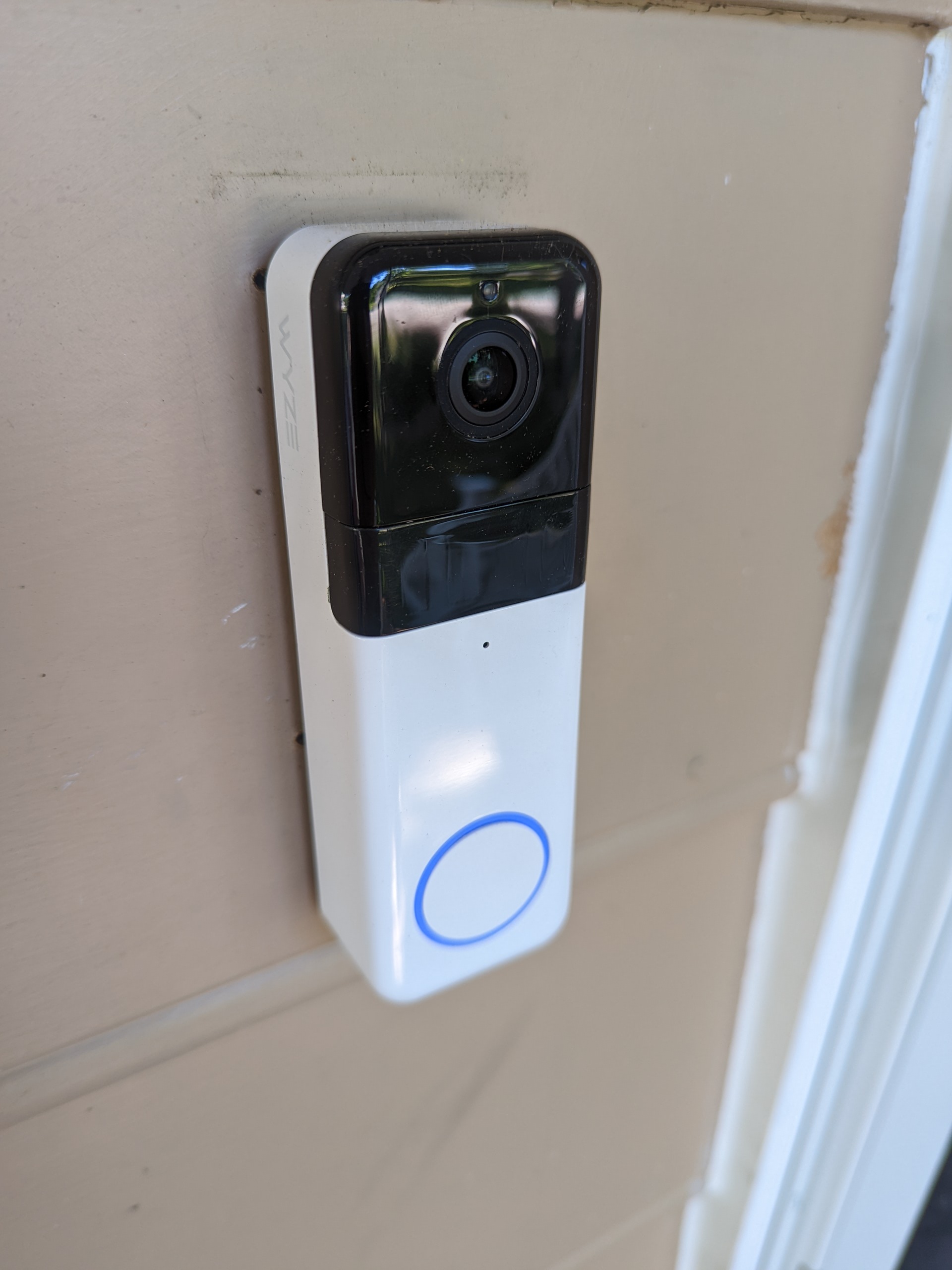 The Wyze Video Doorbell Pro enhances the company’s original, lower-priced video doorbell with a better design, higher-resolution camera, and the best AI on the market. Its most prominent feature is a wire-free (battery-powered) option for households without existing doorbell wiring.

The doorbell is small, well-constructed, and feels substantial. It is packaged with an indoor chime and mounting hardware for the front of your home or apartment.

Wyze Video Doorbell Pro is less expensive than most competing doorbells at just over $90. However, the price tag is only half the tale. A subscription is required to access many of its best features, increasing the total ownership cost. Fortunately, Wyze is also cheaper than its competition in this area as well, costing only $2 a month (when purchased annually) for the advanced features. You can elect to just use it for the live features without extra cost though! Wyze’s website advertises a 30-second installation time for the Video Doorbell Pro; utilizing the accompanying 3M strip for a wireless install will be much quicker. Battery charging, firmware updates, and app installation are required to get started, although Wyze has significantly shortened the installation procedure. Wyze are masters of the easy installation and this doorbell is no exception.

Once the buzzer and chime are operational, using them is simple. When someone touches the button, the bundled plug-in device and the phone emit a pleasant, loud chime and you can configure this to any of the included chimes you desire.

You also receive fast notifications if someone approaches your house but does not ring the doorbell, such as a delivery person. In testing, we found this to be significantly faster than Ring Doorbell Pro and the Google Nest Doorbell.

After launching the live broadcast, you can communicate with the visitor or delivery person via two-way conversation. I tested the doorbell extensively and was astonished to find that it consistently would capture any person before they even reached my porch.

The AI features also identify if the camera has detected a person, a pet, a vehicle, a package, or even all of the above!

The impressive about Wyze is that despite its low price, it boasts several luxury characteristics, such as a 1:1 aspect ratio and a horizontal and vertical field of view of 150 degrees. That means you have a crystal-clear picture of a package left below the buzzer and a crystal-clear image of your visitor. In my case, I can see the floor of the porch, the entire porch from side to side, and even the ceiling. Not counting the sidewalk and yard.

While the resolution of 1,440 by 1,440 pixels was not as good as I would have wanted at greater distances, it served its purpose. The camera’s high dynamic range prevents loss of clarity in areas of shade adjacent to areas of direct sunshine. I can’t quite read a license plate 25 feet away, but I can read the plates on the cars in my driveway.

The night vision is also quite good. Not Wyze Cam V3 good, but far better than the Ring doorbell I replaced this with.

Wyze offers one of the best free cloud storage solutions out of the box. You will receive free storage for 12-second clips on a rolling 14-day basis. In addition, there is a five-minute break between recordings. No, it’s not impregnable security, but it’s more than most large businesses provide for free.

If you subscribe to Wyze’s $2-per-month cloud storage service, the cooldown period is eliminated, and you are provided 14 days of rolling storage for clips of any length. It also adds more intelligent notifications that differentiate between people, animals, vehicles, and deliveries.

In summary, this is a must-have video doorbell.

Wyze addresses several of the performance issues that plagued its first video doorbell. But the Pro isn’t perfect:

The 1:1 aspect ratio’s fish-eye appearance is another very minor irritation. Sure, it’s fantastic to have such a wide field of view. Still, the image distortion at the corners isn’t as appealing as on more expensive video doorbells with comparable areas of view, such as the Arlo Essential or Ring Pro 2.

None of these shortcomings come even close to being deal-breakers, but they prevent the video doorbell from utterly dominating its rivals.

If you’re interested in wireless video doorbells, this is one of the best options available and has the best value.