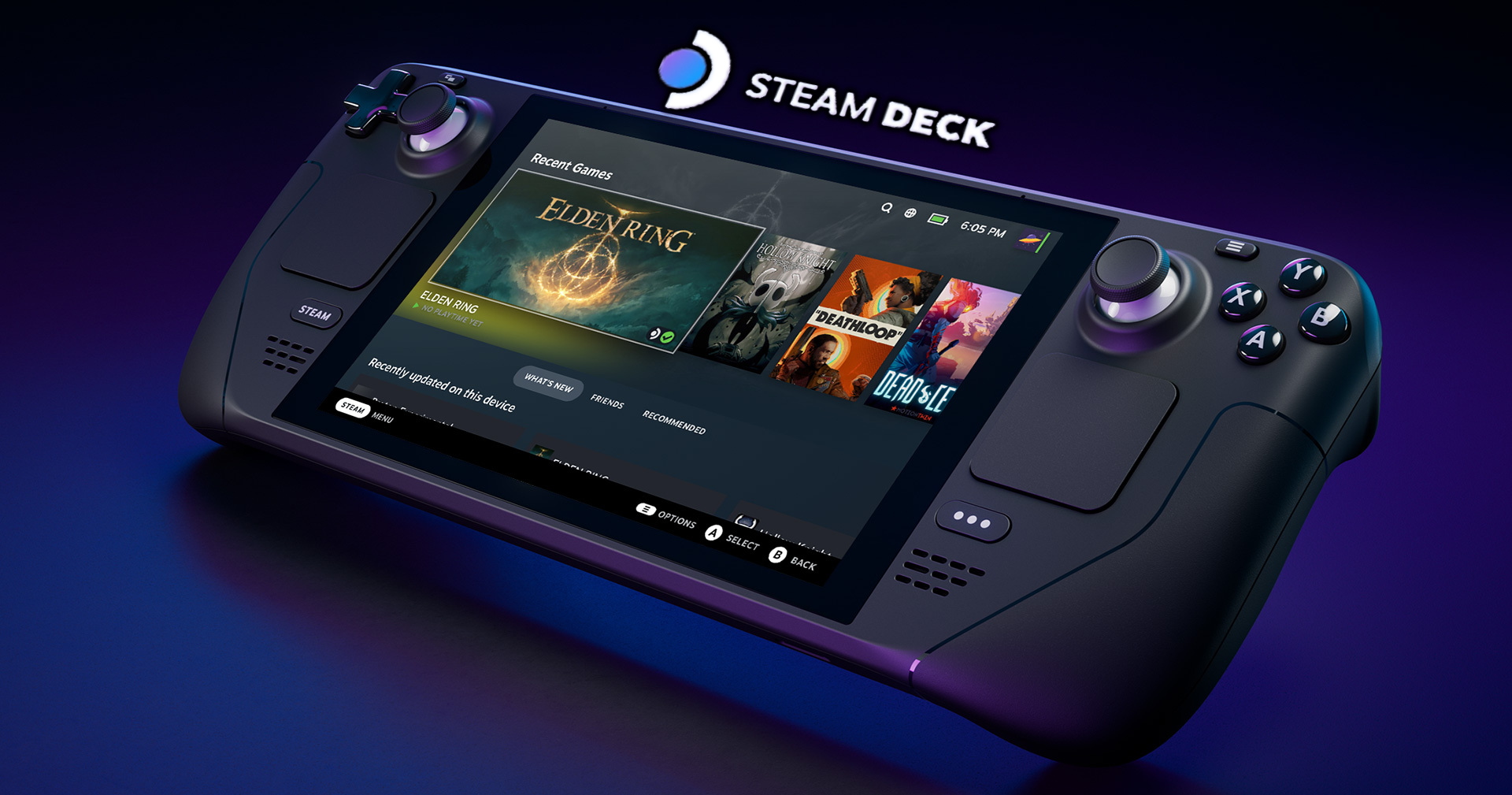 Valve has, once again, outdid themselves. Their new “console,” and I use the term somewhat loosely, beats the brakes of their previous consumer products. Instead of getting a review product, I sat in the que for exactly one year and two weeks to get my Deck – just like everyone else. Thus, this review is done from the perspective of someone who shelled out the money, paid the piper, handed over the shillings, coughed up the dough, and purchased the unit just like any given consumer. The writing this time is broken into two parts, the consumer electronic review and the tech-savvy (re: geek) side. This is done, mainly, due to the fact that Valve found a way to hit both markets with one device. With that out of the way, let part one commence…

With all of the excitement, and frustrations, around both Microsoft’s XBox and Sony’s PlayStation 5, Valve entered into the console frey with a very Nintendo-Switch like device. Unlike the Switch, their new hardware, the Steam Deck, doesn’t completely fit the mold of standard consoles. Right out of the box, it doesn’t have the “launch title syndrome,” uses standard peripherals, and still plays an astonishing amount of modern, AAA releases. All of this, is without getting into “streaming,” which it succeeds at with spades. As a “console,” Valve’s Steam Deck is already a serious contender for the gaming market-share.

Your game library is waiting to go with you, no seriously. This isn’t the Valve Deck, it is the STEAM Deck. If you are already a Steam user, as most likely the case, then you already have a library of games to play on the new device, and, yes, without streaming. Of course you can stream your games to the device, because the Steam Client can stream from one to another. Valve has been active in a program called “Deck Verified” to help people find games, but a lot of the “unverified” titles simply havent gotten tested yes. You, in the back; I see you. The answer is “Yes,” by the way; you can stream FROM the Steam Deck TO your PC too.

Considering that Steam Decks have been rolling off the manufacturing line since February, you would think there wasn’t too many peripherals. You would be wrong to assume that. A quick trip to Amazon reveals exactly the opposite is true. From well known brands such as D-Brand or Jsaux to downloadable 3D printer plans, the flood gates are open. Docks, 90 degree angle connectors, your XBox controller, and even a wall mount. Yeah, I can’t explain the wall mount either, but, hey, if it tickles your fancy.

The library in question is certainly not limited to indy titles, like the phenominal Vampire Survivors either. Elden Ring, Sony’s Spider Man Remastered, Fallout 76, No Man’s Sky, and many others work “out of the box,” or with very minimal tinkering. From God of War to The Elder Scrolls, the Steam Deck is home to many big budget titles from classics to new releases. What I find really great in this department is that if you’re on Steam’s store using the Deck – It will filter the titles to “Works Great on Deck” for you. No guesswork.

With everything mentioned, streaming games from your existing PC is available too, since the Steam Client handles this using your home network. The Steam Deck not only plays current AAA games without much fuss, but will be able to continue to do so for the forseeable future. Utilizing standard peripherals, even things like adding an external drive is not out of the question. Finally, and this cannot be stated enough times, you have access to your entire Steam Library on day one. The conclusion is simply this is a very solid gaming system, but if you like to tinker… Or want even more streaming games… Or you want the mouse and keyboard experience… Oh yeah, it’s time for part two.

Traditionally, the tinkerers among us would immediately go to work trying to “jail break” the system for a little extra oomph, install emulators, add in features that they want, or just to prove they could. The bad news is you can’t. The good news is why. Valve made sure that this “console” is factory jail broken FOR you. It comes with Linux installed with the Arch Desktop. That not geeky enough? Try dual booting Windows. Conversely, you could just ditch Linux, and install Windows instead. The world is your oyster.

While I’m not going to cover emulation, as that is a no-no topic, we are going to cover some of the other cool things that have been unleashed upon the gaming community. First, and foremost, this thing has been embraced by team XBox/Microsoft. (Who said they aren’t geeks too?) Flatpacks and the App Installer makes Linux more user friendly for borderline Linux Nerds. Finally, there is using the Steam on desktop mode to add functionality. Honestly, I could go on and on, but this isn’t supposed to be a novel.

It did not take Microsoft very long to decide to support the Steam Deck, they jumped right in with a port of Microsoft Edge. Just a browser? Well, not so much. The Microsoft browser has a few hooks built in that allows it to access the GamePass Cloud Gaming. (Seriously, Microsoft? Just call it XCloud.) This allows you, the user, to get those GamePass games running on your Steam Deck. They even wrote their own walk through for the process. If that’s not enough, check the links at the end for a list of other streaming answers – including XBox Remote Play, PS4/5 streaming, and emulation. The amount of non-Steam games available is remarkable.

A concern that people may have is installing Linux based applications on the device; however, Valve made sure that the version of SteamOS (their custom Arch Linux install) includes a “Discover” store. Like it’s a store. Hah! It’s really just a repository of applications. This is where you’ll find tools, utilities, and even office products that you can use in the desktop environment. From LibreOffice and WPS Office to Chrome, the “Discover Store” is your gateway.

Speaking of Chrome, this lets us add a few more things to steam. Once Chrome is installed, Deck users can visit Light Den Academy’s instructions on how to set up different video streaming services on the device. Hulu, D+, Netflix, and many more can be set up to run directly from the game interface. Mind you, the set up will require the some elbow grease, file copies, etc. in desktop mode. However, it is absolutely fantastic that a “console” allows the users this much control!

While I feel like I’ve been writing on this review for a while, I’ve not even scratched the surface of the nerd’s cookie jar here. Piggybacking Chrome to add streaming video, a wonderful “app store,” and getting XBox cloud gaming is just the tip of the iceberg. For a tinkerer, the Steam Deck is just like getting a new PC, because IT IS GETTING A NEW PC. To put it bluntly, do the math. This is a $400 mid-tier gaming “laptop,” I am very happy that I was able purchase my own Steam Deck. The device is solid, and brings a whole new meaning to an old computer buzzword, “Convergance.”

This is normally where we here at GadgetNutz write in our wonderful little conclusion; however, it’s not the end of the story. There are competitors to mention.

First up is the Android based Razer Edge 5G, which is using the monstrous Snapdragon G3x Gen 1 processor. The Razer device is interesting due to it’s specs, but will only be able to store Android based games on the local device; although, it will be able to stream from the Microsoft XCloud (whatever they are calling it this month). The Razer’s drawback is that it will carry a hefty price tag, and may not natively support much in the way of non-android local games. Until Razer gets their Edge closer to release, there isn’t a whole lot we can report beyond speculation.

The almost ready to release Logitech G Cloud Gaming Handheld, another android based solution that really only offers cloud gaming. I didn’t do a whole deep-dive research on this mainly because of it’s strict limitation of streaming only. It does support all of the usual suspects, X Cloud (or is it GamePass Cloud Gaming again?), NVidia’s G-Force Now, and Steam’s own Steam Link. To make matters worse, it’s coming in at a $349 price tag that is only $50 short of the entry model Steam Deck.

Finally, there is the venerable Nintendo Switch, which, while not a power-house, boasts a really robust library. Not only does the big N’s device have a stellar library, but developers keep finding ways to port more big titles to the platform.  Considering that there is a “Lite” version available, and the regular version comes with a dock, it’s hard to knock the Nintendo Switch. There is no question that this machine is a winner, but the lack of raw horse-power, and a desktop, limits this device to just gaming.

In short, even with competition, Valve’s Steam Deck stands a head above the rest of the market. It’s simply a better console. It’s a serviceable Linux PC. It can do everything the competition can do, AND it can play your Steam Library without a constant connection to the internet. Which begs the question of Razer and Logitech, “how portable is it, when you get out of range of the 5G signal?”

The official Steam Deck Dock has been released.

*Surprise. This article was written on a Steam Deck in desktop mode!