I’ve fallen in Love with the BlackBerry® Curve™ 8530

My last experience with a Blackberry® was a Pearl around 2006. It was small and beautiful. And did a LOT. Sometimes playing AVI’s was a bit of a struggle, but it was a trooper of a device. Well, several years later and an OS v5.0.0.395, with WiFi and CDMA this Blackberry® Curve™ 8530 just explodes with features it does really well.

On first view the Curve’s new (for me) feature is the trackpad. I was familiar with the trackball on a BB pearl and that was very nice, but this was instantly easy to use. Felt right immediately. I’ve heard some people complain, but I’m really not sure why.
As I was looking through some pictures I accidentally discovered rolling the trackpad moved to the next image. What a cool surprise! Yes, the trackpad IS sensitive (you can even specify the sensitivity in the settings) and if you aren’t paying attention it could go farther than where you intend. But I found that with a little practice – and I do mean LITTLE – the trackpad is so easy to use.

As soon as I turned on the phone I was taken through a wizard that explained how to get the phone up and running. There was a simple tutorial on how the keys worked, setting up the time, and so on. Even a dummy could get this thing working. I was even able to connect to my FIOS wireless from the instructions! Exciting! I was up and running immediately.
You can add up to 10 email accounts and I added one yahoo and one gmail to try this out.

One thing that doesn’t seem to work “perfectly” is syncing the contacts list. I tried various methods. After installing the BB Desktop Manager on the Toshiba laptop (I’ll discuss that in a future article) I found that this method synchronized phone numbers but not email addresses or street addresses. I tried loading CVS files saved from my email contacts but this wasn’t very effective.
Another method is downloading Google Sync,, a free program I found on http://crackberry.com/. The email address were transferred as well as the street addresses. Except they were not placed in the correct fields. With the first syncing up the city and zip ended up in the “address2” field. Then I tried rearranging the address in my gmail contacts by placing each section on a separate line. The Gmail contacts fields is really just one field which is why I separated the address parts on their own line. Street number on one line, City on the next line, State on the next line, zip on the next line. That worked much better but not perfectly. And trying this with yahoo contacts is worse so I gave up.
Now, for those that don’t know, I refuse to ever use Outlook Express. Call me crazy (you won’t be the first), but I feel this is the source of viruses. Maybe the sync would be perfect with Outlook, but why should I be forced to use it? I want to use what I WANT. I’m funny that way.

After I included my gmail account on the phone I tried the sync again. It seems to work about the same as the free program. Another fact about BlackBerry’s is that being originally for Business it defaults to assuming any address is a Work Address.
Many of my contacts simply don’t include a work address but the BlackBerry® just duplicates any contact address in the Work category willy nilly. Ok, this isn’t a huge problem, it’s just another element that the user doesn’t seem to have total control over. And my main concern about addresses being correct is so they function correctly if I need to access them via google maps or BlackBerry® maps. Using the menu when you have selected a Contact “Show on Goggle Maps” or “Map It” – which starts the Sprint Navigation program. Now my method of organizing the addresses doesn’t always sit well with the Sprint Navigation program and that means fussing about with addresses. This is somewhat annoying. But not the end of the world. Google Maps generally seems to get the addresses correct. Another item that syncing with my Google Contacts won’t catch is the PIN number of any BlackBerry® owners. I solve that by listing PINs as a “Note” included with that Contact in my Google Contacts and copying that the the proper Field in the phone.
Obviously I’m going to have to work on this. I’m sure there are better ways of organizing my Contacts and maybe I’m just missing something. I never claimed to be a genius.

Anyway, I do love many many features of this phone including little things like the calculator, the calendar, the Alarm, etc. I happen to use phone calculators A LOT. For various things and the BlackBerry® not only has beautiful colors that are easy to read, but I can use the trackpad And key-press both to input numbers. Very easy to use and SEE. And that’s important as one gets older eyes, ya know. Plus there is a built-in To and From Metric converter. Very cool! I love the Calendars weekly view because i can easily scroll to events which have the text listed at the bottom of the screen. This is the best method for showing what is going on easily and quickly. And you have the option of viewing several calendars, either together or separately. 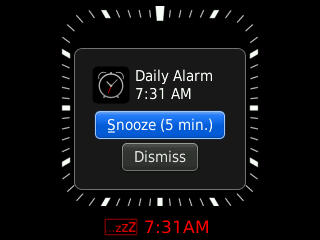 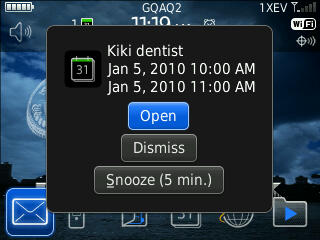 Another wonderful convenience is when I access voicemail I could call back the person who left me a voice mail message. As I listen to the callers message I am informed that I can call them NOW. And the call goes right through. No looking for their number or going out of voicemail. Yes, for people who have BlackBerry’s and have gotten blase about this, well la dee DA. This is a very nice time-saver. And it works. Just like that!

Now, because I drive having a BlueTooth phone is vital. So I immediately tried out my Wep200. It’s a few years old but still works. and the Curve had no trouble finding it. You can set up BlueTooth quickly and easily on the Curve. But I can do more with a BlueTooth enabled Curve than just accept calls. I can connect another phone (in this case a BlackBerry Bold – another article awaits, people) and send over ringtones, images, whatever. You have to coordinate to transfer because on the receiving phone you have to tell it to Look for Incoming file and the Sending Phone at about the same time has to start sending, but do it a few times and it becomes easier.

Sure transferring music, ringtones, pictures, documents and so on is easy to do. I can plug in the USB cable into my Ubuntu Linux system and the BlackBerry Curve is immediately seen as a removable drive with music. I can play the music or use the file manager to move and copy files. I’ll discuss the Windows Desktop Manager in the next article.

until then here’s some stats: